What if my baby delivers prematurely?

7.7% of babies in Australia born in 2012 were preterm with most being late preterm births 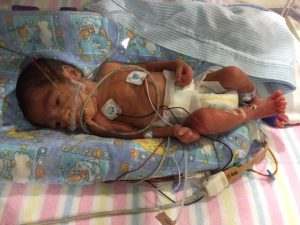 While Norwest Private and the Sydney Adventist Hospital (like all private hospitals) hospitals do not have a Neonatal Intensive Care Unit (NICU or Level 3 Nursery), they do have Level 2 Nurseries. If you go into labour at 34 weeks on (a late preterm delivery) you can be delivered at the hospital where you are booked.  This is the case for most preterm deliveries. Your baby would be managed in the Level 2 Nursery of the private hospital where you are booked.

If you did labour or need delivery before 34 weeks gestation you will need to be transferred to a public teaching hospital that has a Level 3 Nursery. The closest teaching hospital is tried first (Westmead Hospital for Norwest Private and The Royal North Shore Hospital for the San). If that hospital can’t take you then another

Read More...
Comments Off on What if my baby delivers prematurely?
Posted by Dr Gary Sykes on March 5, 2016 -

Protecting your new baby from infection I had delivered nine eight days earlier I was very pleased to see she had her baby in a protective sling. Not only was this very convenient for her and took up minimal space in the car (c.f. a pram), but also the sling facilitated her giving her baby instant attention as needed, was a very comfortable for her and baby, was a comforting position for her baby and made it very easy for her to avoid her baby coming into contact with others and so protected her baby from infection.

The baby is facing in towards mother’s chest in a newborn sling. This prevents an admirer asking for a cuddle, touching baby and even talking over baby’s face.  When someone coughs, sneezes, or talks they can release germs into the air which can infect anyone, including a baby, within one metre.

So often I have seen the opposite where a newborn baby is in a pram with everyone wanting a close look and a cuddle. So often it is asked: “Can I have a cuddle?” So often the newborn baby is handed from one admirer to another for a cuddle and without people thinking that they

Read More...
Comments Off on Protecting your new baby from infection
Posted by Dr Gary Sykes on June 28, 2015 -

Circumcision of a male is the surgical procedure where the foreskin of the penis is removed.

Why is newborn male circumcision done?

As a newborn, it is done for religious reasons and social reasons.

The most popular social reason is for conformity of the penis appearance with dad and other male family members, etc.

Occasionally it needs to be done later in life for medical reasons.

In Australia, the popularity has declined because it is generally considered by doctors that routine circumcision of the newborn male can be advocated for medical reasons. It used to be considered medically important but it is now realised that is not the case. Very few doctors advocate routine newborn male circumcisions.

Will your son agree with your decision?

As now in Australia now the large majority of males born are not circumcised, it is likely he will