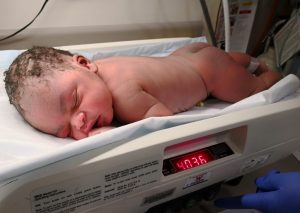 I met Francine, her husband Bonaventure and their first three children at her first antenatal visit with me when she was 33 weeks pregnant. Francine and her family had just arrived in Australia from the Congo in Africa. Bonaventure was here for his PhD studies at the University of NSW. Francine only spoke and understood French and Swahili, not English. Bonaventure was very fluent in English and so interpreted for her.

This pregnancy had been progressing uneventfully. She wanted to attempt a VBAC again. While I was optimistic that all would go well, I was also apprehensive as she had had two previous Caesarean sections. That meant there was more scar tissue in her uterus than would be the case if she had only had one previous Caesarean section delivery. Scar tissue is not as strong as healthy tissue and so there was implied increased risk of uterine rupture. I had no background medical information about the Caesarean sections deliveries, such as technique, whether there was extra uterine tearing, infection and whether there appeared to be adequate uterine wall thickness at the second Caesarean section delivery. She had only had an ultrasound assessment of the uterus looking for defects in the uterine wall uterine wall thickness before this pregnancy or in early pregnancy. There were unquantifiable variables that could increase her risk of uterine rupture and no ultrasound assessment about the likely strength of the uterine wall.  While having had a successful vaginal delivery was encouraging it was no guarantee all would go well with a VBAC attempt this time. I know of one woman (not my patient) who had had a Caesarean section delivery and then three successful VBACs. On her fourth attempt at a VBAC, her uterus ruptured.

As the pregnancy progressed I became aware that there had been another successful VBAC attempt that had not been mentioned at her first antenatal visit with me.  That it had not been mentioned to me was because this infant had died from infection in the first year of life and in their culture children who die are subsequently not mentioned. That she had had two successful VBAC attempts was encouraging all would go well.

I advised Francine and Bonaventure of the risks of uterine rupture and the implications and that the safest option was an elective Caesarean section delivery. Francine was very keen on another vaginal delivery. She said she wanted seven children. That was not likely to be possible if she had a third Caesarean section.

Because of the unusual situation of attempting a VBAC after two previous Caesarean sections, I brought Francine her and wishes to the attention of the Midwifery Nursing Unit Manager in charge of the Birth Unit. She brought her to the attention of the Hospital administration. She then attended the hospital where there was detailed of the risks of uterine rupture and the implications through a qualified NSW Dept of Health French-speaking interpreter. She then signed a Hospital consent for attempting a VBAC.

The hospital subsequently decided that if she laboured on the weekend or out of hours she should deliver at the closest public teaching hospital. This was because of the risk of possible delay out of hours in getting her to theatre if there was a uterine rupture. Arrangements were made with this public hospital’s senior staff and Francine and Bonaventure were informed.

Francine’s pregnancy progressed to 40 weeks gestation. Her cervix was <2cm dilated and 3cm long. Baby’s head was not engaged and was 5/s’s palpable abdominally. The ultrasound estimated weight of her baby was 3637gms. Her first baby had a birth weight of 4.4Kg and the next three of 3.7 to 3.8Kg. I advised Francine that labour was not imminent and that she could go significantly overdue. I advised her of the risks of going overdue and the risks of induction of labour. She was not keen on induction of labour and going overdue did not worry her as with her first successful VBAC attempt she went into spontaneous labour at 43 weeks. 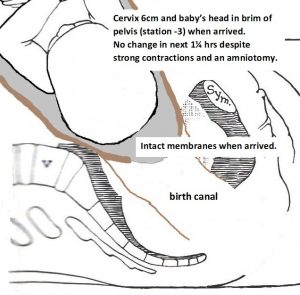 Francine was admitted to hospital in spontaneous labour when she was 40 weeks and 3 days gestation. Her cervix was 6cm dilated and baby’s head was high at station -3 (brim of ‘true’ pelvis), and not well applied to the cervix when she arrived in the Birth Unit. Over the next one and a quarter hours there was then no progress, despite an amniotomy being done to augment labour and despite regular strong contractions. Her cervix was still 6cm cervical dilatation. Her baby’s head was still high at station -3. This lack of progress suggested the baby head was too big for her birth canal. This development increased the risk of uterine rupture.

The baby’s heart rate pattern went from normal to very abnormal with recurrent late decelerations being seen on the cardiotocogram (CTG). The abnormal foetal heart rate pattern suggested there was a lack of oxygen getting to the baby. While the reason for foetal distress was not known, with the lack of progress in labour and her history of two previous Caesarean section deliveries there was the concern that there was uterine rupture. 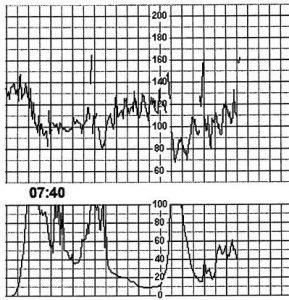 When Francine arrived in theatre she said she wanted to push. I examined her again. Now her cervix was now 9cm dilatation and the baby’s head had descended so its lowest point was at station -1 (just above the ischial spines or almost midway down the true pelvis). There was now meconium staining of the liquor.  The baby’s heart rate was slow.

I encouraged her to bear down with contractions while I pushed the lip of cervix up. Her husband Bonaventure did a great job interpreting and encouraging. Francine pushed very well. She was aware of the urgency in getting her baby delivered. With her bearing down and my pushing the cervix lip up she progressed to full cervical dilatation and her baby’s head then descended to station +2.  I then applied the Kiwi vacuum cup to the baby’s head. With good maternal effort, I was able was able to deliver by with the next contraction. There was very thick meconium staining of the liquor seen at delivery.

The baby was given immediate resuscitation by the attending paediatrician with an oxygen mask but picked up quickly.  Umbilical cord blood was collected for analysis. The results were consistent with a combined respiratory and metabolic acidosis (birth asphyxia) of recent onset. The baby weighed 4036gms. While baby had experienced a severe reduction in oxygenation, it was of sudden onset and was only for a brief duration and so it would have no long-term impact on baby’s wellbeing.

There was a first-degree tear which I sutured. I also checked the uterine scar by internal examination and it felt intact. There was no explanation for the severe foetal distress.

Francine and Bonaventure were very happy. While there was a very dramatic ending, all worked out well. Mother and baby were both in excellent condition and Francine had achieved her wish to have a vaginal delivery.