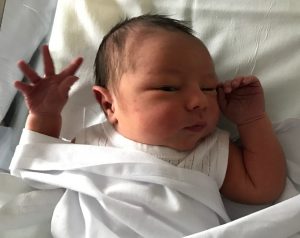 Vanessa saw me for her first antenatal visit of her second pregnancy when she was 8 weeks pregnant. She told me her first pregnancy was uneventful. She went into spontaneous labour at 37 weeks. Labour lasted about 15 hours. There was a lack of progress in the second stage despite one hour of pushing. Forceps were used to help deliver the baby’s head. As well she had an episiotomy.

She told me there was shoulder dystocia. This occurs when the baby’s shoulder becomes stuck behind the mother’s pelvic bone, preventing the birth of the baby’s body. Her baby’s brachial nerve plexus (the nerves that come from the spinal cord in the neck and travel down the arm) was stretched because of the manoeuvre to overcome this and deliver her baby. Her daughter has sustained permanent weakness of the left arm. This is called an Erb’s palsy. It has been managed with both surgery and physiotherapy, but she still does not have normal function of the left arm. Her daughter’s birth weight was 3.77 Kg. She said she herself still has some discomfort with defaecation and sometimes with sexual intercourse.

We discussed delivery of this pregnancy and agreed it was safer for her to have an elective Caesarean section. There was an increased risk of shoulder dystocia this time, having had it with her first delivery. As well there was the emotional impact on her this pregnancy as she would be worried it may happen again. Her pregnancy progressed uneventfully and an elective Caesarean section was booked.

Two days before her elective Caesarean section date Vanessa went into labour. I was phoned by the midwife when she arrived at the hospital. I told the midwife a Caesarean section should be arranged as soon as possible. It was in the early morning when the call came in. I was at home at the time getting ready to go to work. I made haste to get to the hospital. I was phoned when I was in the car on the way to the hospital to say Vanessa’s cervix was now 8cm dilated. Her labour was progressing quickly and so they were classifying it as a category 1 (very urgent) Caesarean section.

I arrived in the operating theatre just as the theatre crew were assembling. Vanessa was positioned on the operating table for her spinal anaesthetic. She was now wanting to push. She was encouraged to not push by the midwife present and by me. She was told to breathe through the contractions and resist the urge to bear down. Otherwise, we could have a situation where she delivered the head of the baby with pushing and if so we would be committed to a vaginal delivery.

Vanessa was excellent in cooperating and resisted the urge to push. The spinal anaesthetic was quickly administered. I then quickly catheterised her, prepped and draped her and started the operation. I did the transverse incision in the lower segment of the uterus. The baby’s head was now very low, well down the birth canal. I thought to myself: ‘we have done the operation just in the nick of time’. I placed my hand into the uterus with fingers in the direction of her vagina so it went to the front of the head of the baby in the birth canal. I then curled my fingers around the top of baby’s head and in doing so could scoop baby’s head out of the birth canal and deliver it through the uterine incision. This is one of the most difficult and dangerous Caesarean sections as with the head so low and the consequential need to get the head out of the birth canal for delivery, there is considerable risk of tearing of the uterus towards the cervix. This did not happen. The delivery and indeed whole the Caesarean section operation was uneventful.

Her son was born in good condition and had a very generous birth weight of 4.57Kg. He was 0.8Kg heavier than his older sister at birth! The parents and I were so relieved there had been a Caesarean section delivery. With the first delivery, there was shoulder dystocia and permanent brachial nerve plexus trauma and the baby weighed 3.77Kg. I dread to think how this delivery would have fared had we not done a Caesarean section! With the right delivery mode decision, with excellent and prompt acting supporting staff at the hospital and with excellent patient compliance there were no complications and mother and baby have done extremely well.

For delivery baby’s shoulders are in an anterior-posterior position. Shoulder dystocia occurs when a baby’s anterior shoulder becomes stuck above the mother’s pelvic bone, preventing the birth of the baby’s body.

Once baby’s head is delivered baby stops getting oxygen until the body is delivered and baby’s lungs can expand. While the body is undelivered the baby’s lungs cannot function. So, baby is no longer getting any oxygen once the head is out before the body delivers. A brief delay in delivering the baby’s body after delivering the head is normal and of no consequence. But when this becomes a prolonged delay there is an obstetric crisis of the highest magnitude. This is because the longer it takes to deliver the body, the longer it is baby is not getting any oxygen and so is at increasing risk of permanent brain damage from lack of oxygen and of death.

There are various manoeuvres to deliver baby’s shoulders if there is shoulder dystocia. The main risk is trauma to the brachial plexus nerves from being stretched in delivering the shoulders. Up to one in 10 babies who have shoulder dystocia have brachial plexus injury. This injury may cause loss of movement (paralysis) to the baby’s arm. In most cases, this is temporary and normal movement and full function will return within hours or days. A small number of babies (one in 100) who have shoulder dystocia will experience permanent damage. Sadly, this is what happened to Vanessa’s daughter.

As well shoulder dystocia can cause fractures of the baby’s arm or shoulder which usually heal without any problems. Sadly, there is a risk of baby suffering hypoxic (lack of oxygen) brain damage and even death if there is considerable delay in delivery of the shoulders.