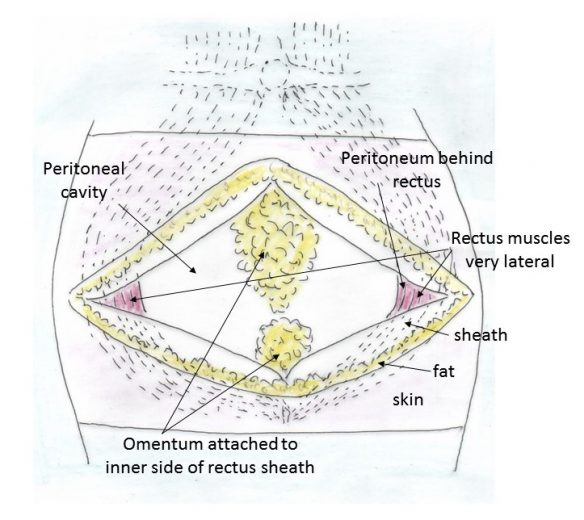 A patient said to me at her first antenatal visit of her second pregnancy that she wanted an attempt at a VBAC (Vaginal Birth After Caesarean section). She was ten weeks pregnant at the time. I had not met her prior and I was not the obstetrician for her first pregnancy and I did not deliver her first baby. She said she had had an uncomplicated Caesarean section delivery because of breech presentation of her baby.

I told her that a Caesarean section because of breech presentation was not a reason that she could not try a VBAC this time. I told her there were no contraindications to attempting a VBAC with consideration of her height, build and history though I would need to make a further assessment in advanced pregnancy.

The pregnancy progressed uneventfully. In advanced pregnancy, I went through with her my article ‘VBAC – Risks and management’ in the Question and Answers section of my website. She was aware of the risk of uterine rupture, that uterine rupture could not be predicted and the possible consequences for her and her baby if uterine rupture if it did occur.

In this article ‘VBAC – Risks and management’ are listed situations when the risk of a uterine rupture increases, and so it is recommended not to attempt a VBAC. I assessed the baby’s size carefully by ultrasound scan done by me and done externally and it was <4Kg. I assessed her pelvis by CT pelvimetry and it was adequate for a vaginal delivery of a normal sized baby. I explained the only two listed risk factors I had no insight into, as I had not been her obstetrician in her first pregnancy, were:

After discussion with her husband, who she said was nervous about her attempting a VBAC, she changed her mind and wanted an elective Caesarean section delivery.

The operation was done under a spinal anaesthetic when she was 38 weeks pregnant. It was planned as ‘baby or family friendly’ Caesarean section which meant her husband and baby stayed with her in the operating theatre and in the recovery ward. 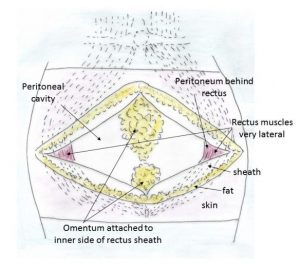 I incised skin on either side of her old scar, cutting out her old scar. This will give her a better cosmetic result than having two scars and this technique lends itself to better healing. I then transversely incised subcutaneous fat under the skin incision and then I transversely incised the anterior rectus sheath layer. I was surprised to see there were no more abdominal wall layers below sheath. And after cutting through the sheath layer I was in the peritoneal cavity.

Normally after dividing the anterior rectus sheath layer there should have been the rectus abdominis muscles seen which needed to be split in the midline. Then there would have been an incision of the parietal peritoneal layer and then I would have access to the peritoneal cavity. But in this case, the rectus muscles were displaced very lateral in her abdominal wall. She had an extreme rectus abdominis diastasis (diastasis recti, divarication of the rectus abdominis, abdominal muscle separation). The edges of the parietal peritoneum were also very lateral on the underside of the rectus muscles. That meant her peritoneum cavity front wall was anterior rectus sheath and not parietal peritoneum as it should be. I suspect these findings were due to abdominal wall closure technique at her previous Caesarean section and also possibly poor healing.

Furthermore, the omentum (fat around small bowel) was markedly adherent to the back of the sheath. I had to free the omentum from the sheath before continuing the operation.

I then noted the uterine wall in the lower segment region was very thin – only millimetres of thickness. This meant minimal cutting only was needed to enter the uterine cavity. The uterine muscle should have been over one centimetre thick.

The delivery of her baby was uneventful. She had a girl weighing 3296gms who was born in excellent condition.

With the closure, I was very particular to carefully close all layers. My usual technique of closing the uterine wall is to close the inner third of uterine muscle in the first continuous stitch avoiding the decidua or endometrial layer (this reduces the risk of placenta accreta next time) and then to close the outer two-thirds of uterine muscle in the next continuous stitch. It was more difficult in her case as the uterine wall was so thin. But I did my best, closing uterine muscle with two layers and so improving its thickness and strength. I then closed visceral peritoneum over uterine muscle.

Next was abdominal wall closure. I found the laterally displaced parietal peritoneal layer (1) and closed this layer of the abdominal wall. I then apposed the rectus muscles midline with two large figure-of-eight stitches (2). I then closed the sheath layer (3), then subcutaneous fat layer (4) and then the skin layer (5). The skin was closed with a subcuticular dissolving stitch. 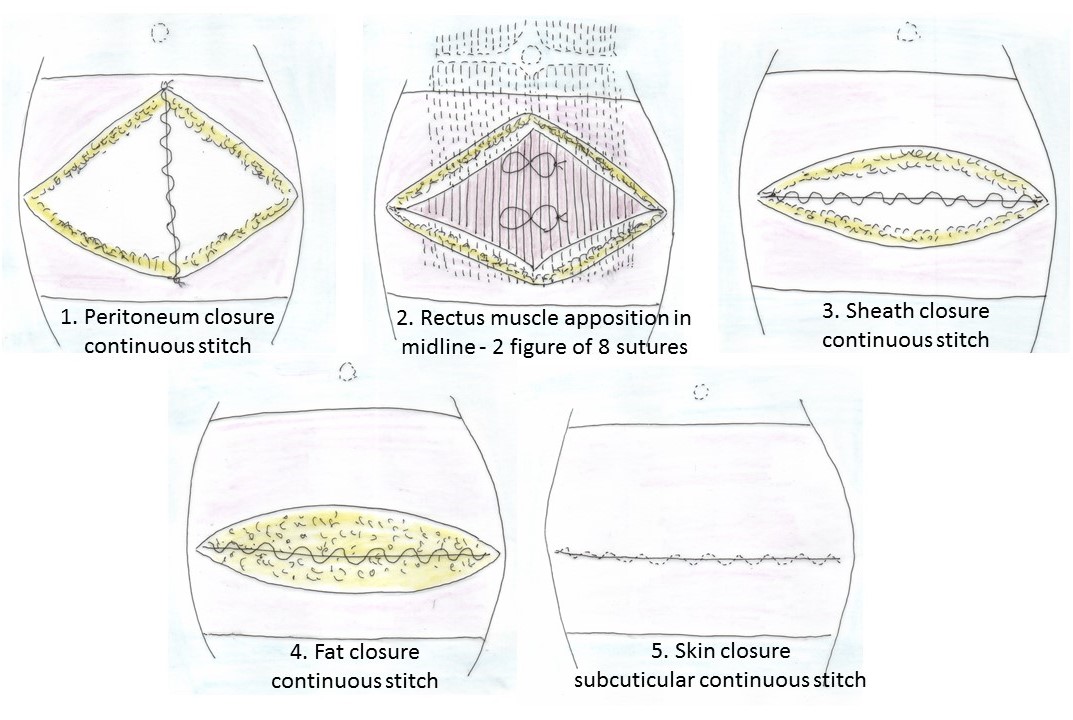 When I saw her the next day I explained in detail what I found and what I had done. I told her that with her uterine wall being thin there was an increased risk of uterine rupture with a VBAC attempt. I explained how I freed the omentum from the sheath and how with closure I carefully closed all layers of her abdominal wall.

Over the next days, she commented how much better she felt with recovery this time than last time and how she needed fewer analgesic medications. I explained I suspected this was because I was very careful with the closure of her abdominal wall, making sure all layers were closed carefully including making sure the recti muscles were apposed in the midline with suturing and so there was no gap between them.

In a recent Facebook message, written 10 days after delivery, she advised me: “I am feeling better than expected. I’ve continued to notice a big difference in how I’m feeling recovery wise and even ……. (husband’s name) has noticed in comparison to how much help I needed from him after ……. (first child’s name) was born”.

The concerning findings were most likely due to uterine wall and abdominal wall closure technique at her previous Caesarean section and also possibly poor healing. These were the two listed factors associated that I had no insight into, as I had not been her doctor in her first pregnancy when assessing for her risk of uterine rupture with attempting a VBAC.