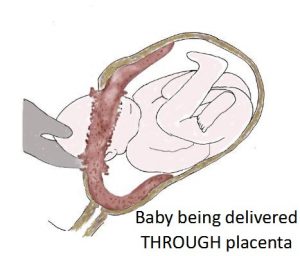 It was a Thursday afternoon. I took a patient to theatre for a Caesarean section delivery because of placenta praevia.

Placenta praevia is when the placenta develops in the lower aspect of the uterus and in close relation to the cervix. In this case, the ultrasound scan indicated the placenta was on the anterior wall of the uterus, covered the cervix and extended onto the posterior wall to at least 5cm. As well the baby was in an oblique lie with the head being on the left side of the uterus.

The main danger of placenta praevia is excessive bleeding. Fortunately, this did not happen with this patient. There had been no bleeding except minor spotting.

Once the baby was delivered the cord was quickly clamped. We had to move very quickly once incision of the uterus was made because with displacement and trauma to the placenta there was a risk of the baby losing blood. But all went well and the baby was born in good condition. The baby was a little girl weighing 3270gms. Mum’s blood loss was not excessive. There was no concern about the baby having blood loss. The placenta was delivered after the baby.

Two weeks later I had another Caesarean section planned for placenta praevia. This time it was a posterior placenta that covered the cervix extended onto the anterior wall to about 5cm, by ultrasound scan checking.

In contrast to the first patient, this patent had episodes of significant vaginal bleeding. She required hospitalisation because of bleeding.

It was late on the Sunday evening before she booked a Caesarean section the next Thursday. I was contacted by the midwife to tell me there was about 300mls of bleeding and the onset of contractions. Labouring with placenta praevia is very dangerous. The placenta is below the baby and obstructs the birth canal. Labouring with placenta praevia will cause very excessive bleeding and so is very dangerous for mother and baby. I advised I needed to do an immediate Caesarean section. The Caesarean section delivery was done at about midnight under a spinal anaesthetic.

This time it was easy to get around the placenta as it was mostly a posterior placenta praevia and then to deliver the baby. Once the baby was delivered the cord was quickly clamped. We had to move very quickly once incision the uterus as with displacement and trauma to the placenta as there was a risk of the baby losing blood. The baby was born in good condition. The baby was a little girl weighing 3010gms. Extra suturing and diathermy were needed to stop the cut vessels in the uterine wall bleeding. Haemostasis was achieved, though blood loss was more than usual.

Placenta praevia is one of the most dangerous complications of pregnancy

Placenta praevia is one of the most dangerous complications of pregnancy and it can be associated with very heavy bleeding. Placenta praevia bleeding is described as ‘painless, purposeless and profuse’ (the 3Ps of placenta praevia). Painless means it can happen without any discomfort. Purposeless means the bleeding can happen without warning or activity (though activity should be limited when there is placenta praevia and there should be no sexual intercourse). Profuse means the bleeding can be very excessive. Women describe how they wake from their sleep thinking they have wet the bed only to find the bed sheets are covered in blood.

These days (in contrast to the past) it does not automatically mean hospitalisation. Hospitalisation is needed if there is significant bleeding. If only minor bleeding there needs to be immediate attendance at the Birth Unit to be checked, no matter what the time of day. In the past, a woman with placenta praevia was kept in hospital for weeks until delivery and blood was kept cross-matched in case an urgent blood transfusion was needed.

The blood loss is from the mother and not from the baby. Baby’s wellbeing is ok, as long as blood loss is not so excessive that it is a risk to maternal well-being. With placenta praevia mother will suffer before baby. In other words, if mum is ok then the baby is ok.

In all cases except minor (called grade 1) placenta praevia delivery is by Caesarean section. That is because when the placenta is below the baby it would deliver before the baby with a vaginal delivery. There would be life-threatening bleeding for the mother and considerable risk to the baby due to lack of oxygen and blood loss with premature placental separation with a vaginal delivery. Caesarean section for placenta praevia is potentially one of the most dangerous and difficult Caesarean sections and ideally should only be done by an experienced obstetrician. Mind you that does not always happen. My first solo (unsupervised) Caesarean section was for anterior placenta praevia. It was many years ago when I was a very junior registrar. The senior registrar said to me he was going to be about 30 minutes away in another hospital if I needed him (Hmmm…). All I had was the assistance of a junior resident doctor. The women did not know about my lack of experience. Fortunately, all went well.

In the past, a placenta praevia Caesarean section was always under a general anaesthetic and the operation was not started until there were four units of cross-matched blood in the operating theatre in case an urgent blood transfusion was needed.

Placenta praevia occurs in about 0.5% of all pregnancies. The incidence is reported to increase 1.5 to 5-fold with a history of previous Caesarean section delivery. I have done thousands of Caesarean sections and this has not been my experience. I suspect it is because I am very careful to avoid suturing the inner uterine wall non-muscle layer (endometrium, called decidua in pregnancy) and so embedding endometrium tissue in the uterine muscle with uterine wall closure.

There is also increased risk of placenta praevia with a history of other uterine surgery such as myomectomy (removal of fibroid), previous uterine rupture or perforation, excessive curettage with a dilatation and curettage of uterus procedure (especially if after a failed pregnancy)

Advanced maternal age increases the incidence of placenta praevia. After age 35 years the incidence is reported to be 2% and after age 40 years to be 5%.

A low-lying placenta is often mentioned at the 19-week morphology scan. This does not mean the woman will need a Caesarean section delivery for placenta praevia. While the placenta does not move its relation to the cervix can change as the uterus wall enlarges as the pregnancy advances.