Her uterus was adherent to her anterior abdominal wall! 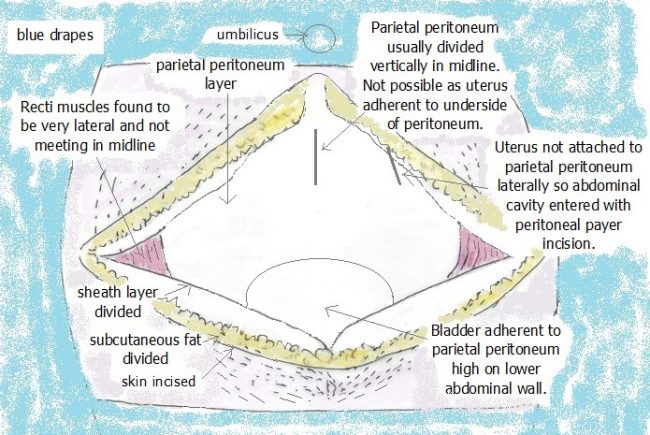 I discussed her bladder being adherent with her. I told her that if the bladder was stuck high on the inner side of her anterior abdominal wall there was an increased risk of accidentally making a hole in the bladder when entering the abdominal (peritoneal) cavity. I told her that I would incise the inside ‘skin’ of the abdominal wall (called ‘the parietal peritoneal’ layer) to enter her abdominal cavity at a higher level than usual and where the bladder is unlikely to be adherent. This would minimise the risk of bladder trauma. I told her the bladder could also be adherent high on the front of the uterus. The usual cut into the uterus to deliver a baby is crossways (transverse) in the lower aspect of the uterine wall (called the ‘lower segment’). To access this part of the uterine wall the outside ‘skin’ covering the uterus (called the ‘visceral peritoneum’) is cut crossways and the lower side of this visceral peritoneum layer is pushed down towards the pelvis. The bladder is attached to the lower side of this cut visceral peritoneum layer and is displaced downwards towards her pelvis and out of harm’s way. If the bladder is very adherent to the front of the uterus then there is more risk of injuring it in accessing the lower uterine segment. I would need to be extra careful.

Her pregnancy progressed uneventfully. When she was 39 weeks gestation she had an elective Caesarean section and tubal occlusion operation under a combined spinal/epidural anaesthetic. 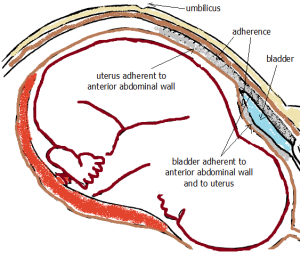 I closed the uterine muscle carefully in two layers as is my usual routine. I then carefully closed the uterine skin (visceral peroneal) layer over the muscle. By not leaving any exposed uterine muscle and having good haemostasis (no ongoing bleeding) it would be unlikely for the bladder to re-adhere to the anterior abdominal wall. The tubal occlusion was done by applying two clips (called ‘Filshie’) to each fallopian tube. I like to use two on each tube to make sure the fallopian tubes, which are more swollen in pregnancy, are fully blocked.

I then closed the superficial defects over the anterior uterine wall where it had been adherent to the abdominal wall inner skin layer (parietal peritoneum) by apposing the edges of the visceral peritoneum that were adjacent to the defects. By doing so there was no uterine muscle exposed to the abdominal cavity. By not leaving any exposed uterine muscle and having good haemostasis (no ongoing bleeding) it would be unlikely for the uterus to re-adhere to the anterior abdominal wall.

This particular Caesarean section operation took longer to do than usual to do as I wanted there to be no complications and good healing. This was the case.

I explained to the patient on the day the findings and what I had done. I explained in detail the findings and what I had done the next day. She then told me the doctor in the United Kingdom had advised her that because her adhesions were so bad that she should not have another pregnancy. She had not told me this before this postop visit! But she did fall pregnant. She said she came to me for pregnancy care because she had heard that I was a very careful surgeon and was very particular when doing Caesarean sections.

A good outcome for mother and baby but one of the most challenging Caesarean section operations I have ever had to do!