Dr Gary Sykes MB BS FRCOG FRANZCOG, is the provider of obstetric care in this practice.

Dr Sykes graduated from Sydney University. His initial postgraduate training was in Sydney at Concord Hospital, then the Royal Alexandra Hospital for Children, Camperdown, Sydney, and then at the Women’s Hospital (Crown Street), Sydney. He completed his specialist training in the United Kingdom, initially at the University Hospital of Wales, Cardiff and then at the John Radcliffe Hospital, Oxford. He was Clinical Lecturer in Obstetrics and Gynaecology at the University of Oxford and Senior Registrar in Obstetrics and Gynaecology at the John Radcliffe Hospital, Oxford. In Oxford as well as being very busy with clinical obstetrician and gynaecologist duties, he trained junior doctors and medical students, did considerable research especially on birth asphyxia (lack of oxygen to baby in labour and delivery), wrote many journal publications and gave lectures in UK and overseas. While working as Clinical Lecturer with the University of Oxford Dr Sykes was awarded MA status by the University of Oxford.

After returning to Australia Dr Sykes commenced private practice as a specialist Obstetrician and Gynaecologist. Now his consulting rooms are located in Norwest. Norwest is in Baulkham Hills which is the next to Castle Hill. He has admitting rights to the Norwest Private Hospital, Bella Vista and the Sydney Adventist Hospital, Wahroonga.

Dr Sykes and his wife Robyn have three children, Matthew (who is married to Tanya and they have four children Ameka, 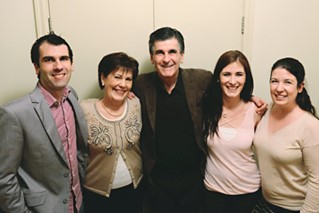 Dr Sykes is committed to his family, his Christian faith, his community and to helping others.

Dr Sykes is committed to providing excellence in all aspects of patient care. He endeavours to do this with consideration of each patient’s desire to feel comfortable, understood and also to receive personalised, individual, expert attention.