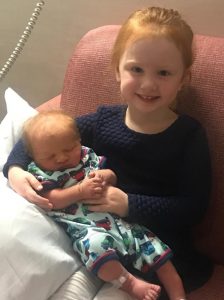 I first met Laura in 2013. She saw me for management of her third pregnancy. Her first two pregnancies had been unsuccessful. She had had two early first trimester miscarriages. She was not aware of a reason why she miscarried.

Her third pregnancy was also not successful. There was foetal demise at nine weeks. I did a suction curettage of uterus. The chromosome result was a male with trisomy 16. I explained that was the reason for this pregnancy loss, but not the prior miscarriages.

Laura then saw a subfertility specialist who did a recurrent miscarriage work up but could not identify a problem that would predispose her to another miscarriage.

I next saw her when she was pregnant again. Sadly, this pregnancy also ended as miscarriage. I did a suction curettage of uterus and this time the chromosome result was normal (46XX).

MTHFR mutation is a change in a person’s genetic coding which interferes with the body’s ability to produce MTHFR enzyme. The MTHFR enzyme is the chemical produced by the body to metabolise folic acid (vitamin B9). There is reported an increased incidence of miscarriage among women with some MTHFR mutations.

MTHFR gene mutations may result in homocysteinaemia (elevated homocysteine level). Homocysteine is an amino acid that is naturally produced by the body which aids in the metabolism of B vitamins. In the presence of MTHFR mutation, homocysteine cannot be effectively recycled and begins to accumulate in the blood hence there is homocysteinaemia. It is suggested that homocysteinaemia may cause the formation of tiny blood clots which block the flow of nutrition to the placenta, essentially starving the fetus and triggering a spontaneous abortion. Anti-clotting drugs such as Clexane and low-dose aspirin reduce the risk of blood clots. Increased folic acid intake may provide homocysteine a target and route by which excess homocysteine can be eliminated from the body.

While Laura had heterozygous mutations for both C677T and A1298C, her homocysteine level was not elevated. As well her B12 and folate levels were normal. It was controversial as to the significance of her MTHFR results regarding her recurrent miscarriage history. I have discussed the situation in detail with Laura and her husband. We decided in view of her history to be proactive. I suggested she commence low dose aspirin and Clexane at 40mg a day immediately after conception and take folic acid starting preconception.

She saw me on 1st April 2015 when she was only 3 weeks 6 days pregnant by dates. I started biochemical monitoring of her pregnancy with twice weekly quantitative HCG and progesterone level checks. As her progesterone level was relatively low and especially as she had been spotting I also commenced her on progesterone vaginal pessaries. The pessaries were discontinued at 12 weeks pregnancy, but the aspirin and Clexane were continued to the third trimester of pregnancy. She saw me each one to two weeks in the first trimester of pregnancy. With this approach to management her next pregnancy was successful.  She gave birth to a little girl weighing 3512gm. Delivery was by emergency Caesarean section because of foetal distress and lack of progress in first stage labour. Her daughter was born in good condition. Laura also did well.

Laura then had an early spontaneous miscarriage in April 2016.

She saw me for management of her next pregnancy in January 2018. She was about seven weeks pregnant by dates and had had some minor bleeding. While she had been on low dose aspirin, Clexane and progesterone therapy, this was a non-viable pregnancy. Ultrasound scan showed she had an empty gestational sac of almost 7 weeks size with no obvious fetal pole. She was reluctant to have another suction curettage of uterus and so we decided to wait. But after three months of waiting she agreed to a curettage and so I took her to theatre for a suction curettage of uterus. The tissue histology report was degenerate products of conception. The tissue was not suitable (viable) for chromosome studies.

In 2018 Laura was pregnant again. I saw her in October 2018 when she was 4 weeks and 5 days pregnant by dates. She had some minor bleeding. She was taking folic acid. I commenced her also on Clexane 40mg per day, low dose aspirin and progesterone pessaries. I also commenced biochemical monitoring of her pregnancy. I saw her every week in the first trimester of pregnancy.

This time her pregnancy was successful. On 21st June when she was 39 weeks pregnant, she gave birth to a little boy weighing 3658gms. Delivery was by elective Caesarean section because of her obstetric history. All went well and Laura and her husband were delighted once again.

Laura has a very challenging but also very inspirational pregnancy history. It is one of perseverance. With perseverance came success. From the time she started trying in 2012 she has had to have eight pregnancies to now have two wonderful children. If you ask Laura: “Was the struggle worth it?” She says, without any hesitation: “YES”. They are a very special couple. I am so pleased to have been able to support them on the pregnancy journeys.