Expect the unexpected with childbirth 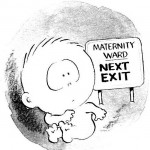 Today I induced the labour of a patient who was 39 weeks pregnant because it was her personal request. It had been an uncomplicated pregnancy.

It was her second pregnancy. With her first pregnancy her labour had been induced at 39 weeks by me at her personal request. In that case after 71/2 hours of labour she had a normal vaginal delivery

I did an internal examination. Her cervix was already almost 3cm dilated, soft and stretchy. It was 1.5cm long and the os was anterior. Her baby’s head was well applied to the cervix and at station -2.

I had hoped an ARM (artificial rupture of membranes) alone would be sufficient. This proved not to be the case. A Syntocinon infusion was needed as she failed to establish 3 hours after the ARM. Mind you the Syntocinon infusion rate only needed to be very slow.

When her cervix was 8cm and she was wanting to push. The midwife asked me to attend the delivery.

I hurried and was nervous as I knew there was a good chance she would have a delivered before I arrived.

This was not the case. Despite her best efforts at pushing and in contrast to her first delivery she could not push her baby out.

On examination the reason was apparent. The baby’s head was in the left occipito poster position. Although at station +3 and easily seen with stretching the vaginal introitus and there being no caput or moulding, a normal delivery did not occur.

After a while with pushing there was foetal bradycardia (slow heart rate of baby indicating foetal distress) without recovery. The baby’s CTG (heart rate monitoring) tracing had been normal prior.

Because of the lack of progress and foetal distress I used the Kiwi vacuum cup to deliver her baby’s head. It was not difficult and I did it over 2 contractions. The head rotated on the perineum to anterior position and back to posterior after it was delivered.

The next challenge was the baby’s shoulders. There was shoulder dystocia (shoulders stuck). I overcame this with McRobert’s manoeuvre (hyperflexing the mother’s legs tightly to her abdomen) and also Woods’ screw manoeuvre (turning the anterior shoulder to the posterior).

As well her baby’s umbilical cord was tight around her baby’s neck and had to be clamped and divided for delivery of the bay’s body could take place.

But all worked out well. She had a little boy who was born in good condition, not needing resuscitation and who was not traumatised by the delivery. She herself only had small 1st degree perineal tear.