Home >Latest Posts >Pregnancy Concerns and Questions >Calculating EDC >How do I figure out the date of conception?

How do I figure out the date of conception?

That is not an easy question to answer. 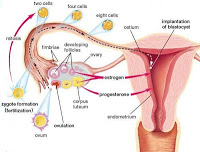 The reason why we use the first date of the last menstrual period (LMP) in calculating the expected date of confinement (EDC) is because most women know their LMP date. But most women don’t know the actual date of ovulation. The exception is women undergoing subfertility management when usually the date of ovulation/egg retrieval/egg transfer is known.

Ultrasound scans are very helpful in checking all this. An ultrasound scan about 10 weeks pregnant is usually most accurate. Earlier scans can have an error because the baby is too small to accurately measure. I have established baby viability (by observing the baby’s heart beating regularly) when the ultrasound length of the baby measured 0.2cm which meant the baby was 5 weeks and 3 days old based on LMP or was actually 3 weeks and 3 days old). See Photo of baby 5 weeks 3 days old

So it is not unusual to move the EDC based on scan measurements. Moving an EDC implies it is considered ovulation was not 2 weeks after LMP but say 3 weeks or whatever is established to be the case by the scan. It a woman has an irregular and longer menstrual cycle then this supports this, but it may also be true for the woman with a 28 days cycle.
Often a woman knows when she is ovulating because she detects a change in her mucous (from gluggy to stringy – called the spinnbarkheit effect), often a twinge of ovary (ovulation) pain and occasionally a spot of blood. Knowledge of sex timing is not that helpful in establishing conception as sperm can live for days.