How soon can I have my baby? 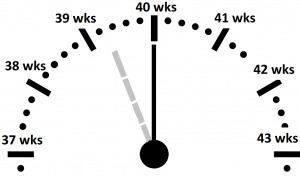 “How soon can I have my baby?” is a question I frequently get asked in advanced pregnancy.

The question is asked because the pregnant woman who asks it is struggling to cope with the impact of advanced pregnancy on her body. I am happy to arrange induction of her labour as long as it is done at a gestation when the baby is sufficiently mature and the induction is likely to work.

As the baby is now larger she can find movement, getting up, walking, etc. can be more difficult and causes discomfort. Just sitting can be uncomfortable. Especially if she has had a baby before, the baby can feel very heavy and low. Multips often say: ”It feels like it going to fall out”. They often can’t find a comfortable position to sleep at night. There are frequent trips to the toilet during the night.

The diaphragm is displaced up and the rib cage is displaced up and outwards by the large gravid uterus in advanced pregnancy. As a consequence, the pregnant woman often finds she can’t take a deep breath and has shortness of breath. She often has upper abdomen and rib cage discomfort. Because her stomach is displaced and because of this her oesophageal sphincter doesn’t work as well as it did before there can be the return of indigestion and heartburn, nausea and even vomiting.

There is often more swelling, especially of the feet and ankles. Sometimes swelling is so excessive that a pregnant woman can only wear thongs.

There can be increasing dizziness (postural hypotension) and increased tiredness. Often a woman in advanced pregnancy needs to go to bed early at night, struggles to do household chores, struggles to go to work. Often, I am asked for a medical certificate so she can stop working earlier than planned as she is not coping.

With consideration of these adverse possible challenges in advanced pregnancy,  it is not surprising many pregnant women want the pregnancy to end as 40 weeks get closer.

A woman can get more anxious as her due date approaches and worrying that something will go wrong, including anxiousness that she could lose her baby. She can hear stories of stillbirth that can cause her to worry excessively. There are often friends and family and Google who tell her horror stories of adverse developments and complications in advanced pregnancy, labour and childbirth. She doesn’t want the baby to get too big as she wants a good labour and normal delivery without needing any stitches.

While she wants to have her baby soon and is nervous about going overdue. She can be told or read online horror stories about induction that scare her. She wants to go into spontaneous labour ideally before her EDC, but sadly that hope is often not a reality. Only about 5% of women go into labour on their due date.

She may feel guilty about asking: “How soon can I have my baby?” She is aware that some of her friends and family may not support and indeed criticise her decision to be induced.

I did seven years of my training to become an obstetrician in the United Kingdom – two years in Cardiff, Wales and then five years in Oxford, England. In Cardiff, I worked as a registrar under two obstetrician consultants. One of these consultants had a ‘no induction for going overdue policy’. He had women going to 44 and even 45 weeks pregnant. I saw women literally begging him to be induced. He had more stillbirths, more complicated labours, more difficult deliveries and more emergency Caesarean sections than the other obstetrician, who had a ‘more reasonable’ approach to going overdue. I am a Director for the Australian Trust for the Hamlin Fistula Hospital in Ethiopia. In Ethiopia, there can be horrific childbirth complications because there is a lack of good health care resulting in women going considerably overdue. I am certainly very aware of the risks of going too far overdue.

So, when a woman asks: “How soon can I have my baby?” I am very supportive of her request and am happy to oblige and arrange induction of labour. This is as long she is at a sufficient gestation so her newborn baby is very unlikely to have any consequential problems (such as baby needing to be admitted to the SCBU with immature lungs) and as long as it is likely an induction will work (her cervix is ready) and she will not end up with a Caesarean section because I couldn’t get her into labour (called a ‘failed induction’).

In the public sector, they have this artificial rule of allowing a woman to go 10 days overdue before induction is considered. I say ‘artificial’ as there is no logical reason why 10 days overdue is so special. It is not like the risk to the baby is considerably more at 11 days overdue than it is at 9 days overdue. I suspect the 10-day overdue rule has to do with concern about placental ageing and so the placenta deteriorating in function as a woman goes more overdue. Consequently, going too much overdue increased the risk to the baby’s wellbeing. But placental ageing and deterioration in function is a gradual process and varies in gestation when it happens from one woman to the next and from one pregnancy to the next in the same woman. Post-Term pregnancy is defined as a pregnancy that goes beyond 42 weeks 0 days. Historically we allowed a woman to go to her 42nd week before inducing her for being post-term. This bar has moved to 10 days past 40 wks 0 days.

There is no logical or medical reason why this 10-day overdue rule should be observed. As far as I am concerned a woman can be induced earlier than this if she requests it as long as the induction gestation is not likely to have an adverse impact on her baby’s wellbeing and as long as the induction is likely to work. There are some very vocal critics who say; “There are too many unnecessary inductions”. I have never taken this blanket medico-political view about needing to ‘reduce the number of inductions’ into consideration with my personalised patient care.

The advocates of the ‘you need to be 10 days overdue before being induced’ rule and the lobbyists for ‘reducing the number of inductions’ remind me of an obstetrician consultant I worked under in Cardiff and his callous attitude and not having any empathy for the pregnant woman or consideration of how she is feeling and what she wants.

I believe a woman’s wishes are very important considerations and it is important for her to be able to have input in her pregnancy care decision making. If she is not coping and she wants to be induced (and the induction gestation is not likely to have an adverse impact on her baby’s wellbeing and the induction is likely to work) then I am very happy to oblige.