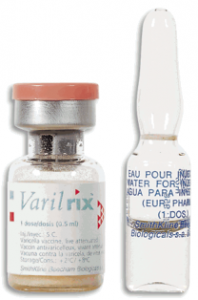 Shingles are the reactivation of the dormant varicella-zoster in someone who has had chickenpox in the past. Shingles are infectious from the onset of the rash until all the scabs have crusted over.

Unlike chickenpox, a person with shingles does not spread the virus through talking, coughing, etc. The virus is shed from the rash. So if the rash is covered by clothes or dressings it is unlikely to spread. Some people have shingles on exposed skin such as the face which will be more infectious than if the rash is covered. Also, if the person with shingles has a poor immune system (for example, someone on chemotherapy who has shingles) then they are more infectious. Even if their rash is covered, they can be considered as infectious as someone with uncovered shingles.

Infant immunisation against varicella is achieved using one dose as the MMRV (measles, mumps, rubella, varicella) vaccine combination at 18 months of age. There is still some doubt however as to whether the vaccine confers immunity in the long term, so this should not be assumed.

Of those who are not vaccinated nine in 10 people are infected with chickenpox as a child. Very few adults get chickenpox.

When you have chickenpox, you make antibodies. The varicella vaccine is a live (attenuated) virus that has the same effect. These antibodies will protect you from getting/getting further chickenpox infection. But about 1 person in 8 do not make enough antibodies and are at risk of further infection. Also after you have had chickenpox the virus then remains dormant in your body and as mentioned above can reappear later in life as shingles.

What are the risks of chickenpox in pregnancy?

Maternal complications of the disease include:

Foetal varicella syndrome (FVS) is a serious complication resulting in the baby to be born developing serious abnormalities. In a pregnant woman with chickenpox the incidence of FVS is:

How can I be checked to see if I am at risk of getting chickenpox?

A Varicella Zoster antibodies blood test can check your immunity to chickenpox.

If you are not immune ask your general practitioner to vaccinate you against chickenpox before you become pregnant. This usually prevents chickenpox from developing or otherwise will make it a much less serious infection if it does develop.

The vaccination involves two injections at least one month apart. You should not become pregnant until one month after you have received the second dose of the vaccine.

Varicella-containing vaccines can be given to breastfeeding women. Most live vaccines have not been demonstrated to be secreted in breast milk.

What should I do if I am pregnant and come in contact with chickenpox?

If you know you are immune nothing needs to be done.

If you don’t know you are immune then you need to have this checked immediately (within two days of the rash) by your general practitioner. If you are not immune and have had significant exposure your general practitioner can arrange for you to have varicella-zoster immunoglobulin (VZIG). You should have this injection ideally within 72 hours of exposure to the disease and certainly within 10 days of exposure. VZIG has been shown to prevent or reduce the severity of chickenpox. If there is any issue with this then contact me so I can make alternative arrangements.

If you are told that a work colleague has developed chickenpox or another child at your child’s preschool or school has chickenpox, then again you will need your immune status checked and if appropriate have an injection of varicella-zoster immunoglobulin (VZIG) through your general practitioner.

What if I develop chickenpox when I am pregnant?

Most pregnant women who have chickenpox recover fully and their baby is fine. However, the illness tends to be unpleasant and there is some risk of complications as stated above.

If you do develop chickenpox, you should be reviewed carefully. Antiviral medication (acyclovir) is an option to treat chickenpox, but to be of benefit, it must be started within 24 hours of the rash first appearing and needs careful supervision. It does not cure the illness but tends to make it less severe. It may help to prevent complications from developing in mother and baby.

If you develop chickenpox within seven days before or after the birth of your baby, the baby can be given treatment which aims to prevent chickenpox from developing in your baby.

Avoid other pregnant women and newborn babies until all the spots have crusted over (commonly about five to six days after onset of the rash).