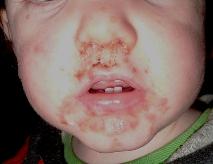 What is hand, foot and mouth disease?

Hand, foot and mouth disease is generally a mild illness caused by the coxsackievirus. It is not a serious illness. It mainly occurs in children under 10 years of age but can also occur in older children and adults.

What are the symptoms?

Can vary from no symptoms at all or only very mild symptoms. Possible symptoms include blisters that start as small red dots which later become ulcers. Blisters appear inside the cheeks, gums, and on the sides of the tongue, around the mouth and as well as on the hands and feet. In infants, sometimes blisters can be seen in the nappy area. Children can sometimes have a low fever, sore throat, tiredness, feel off colour and may be off their food for a day or two. Very rarely, is there an effect on the heart, brain, lining of the brain (meningitis), lungs, or eyes.

How is it spread?

Hand, foot and mouth disease is usually spread by person-to-person contact. The virus is spread from the faeces of an infected person to the mouth of the next person by contaminated hands. It is also spread by secretions from the mouth or respiratory system, and by direct contact with the fluid from blisters.

It usually takes between three and five days after contact with an infected person before blisters appear. The virus can remain in faeces for several weeks.

Is there risk to my pregnancy?

The viruses that cause hand, foot and mouth disease are common and adults including pregnant women are often exposed to them without symptoms. Most infections during pregnancy cause mild or no illness in the mother.

There is no clear evidence that maternal infection causes adverse outcomes of pregnancy, such as abortion, stillbirth, or congenital defects. However, mothers infected shortly before delivery may pass the virus to the newborn. Babies born to mothers who have symptoms of enteroviral illness around the time of delivery are more likely to be infected. Most newborns infected with an enterovirus have mild illness, but, in rare cases, they may develop an overwhelming infection of many organs, including liver and heart, and die from the infection. The risk of this severe illness in newborns is higher during the first two weeks of life.

How can it be prevented?

How is it diagnosed?

The doctor can diagnose hand, foot and mouth disease based on the symptoms. Laboratory tests are not usually necessary.

How is it treated?

Usually no treatment is needed. Paracetamol will relieve fever and discomfort. Do not give children aspirin. If the headache is severe, or if fever persists, consult a doctor.