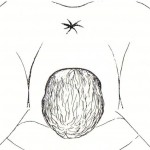 On Sunday morning at about 1.00am a patient delivered a beautiful baby girl weighing 3512gms. It was her first baby and she delivered her baby without even a graze of trauma to her vagina or perineum.

She adopted the position of being on ’all fours’ to push and delivery of her baby. I find when a woman adopts this position there is often no or minimal tearing. I suspect it is due to there being less pressure on her perineum as it stretches. Gravity results in the baby pressing more on her anterior than posterior vaginal entrance.

Another position that is more likely to be gentler on the perineum is if she delivers on her side with flexion of both knees and her top leg supported. Again I suspect it is because there is less pressure on her perineum as it stretches.

I find most women prefer to deliver while lying on their backs. They find it more comfortable and a more efficient position to adopt when pushing. There is more pressure on the perineum as it stretches and so the risk of perineal trauma is greater. But that doesn’t automatically mean vaginal or perineal trauma. I have had very many women who have delivered in this position who have not had tearing.

An epidural will take aware the desire to give a huge push and so result in a slower more gradual and controlled delivery of the baby’s head.

A vacuum delivery will minimise the risk of tearing as delivery of the head can be very controlled by the obstetrician. An epidural and vacuum by an experienced obstetrician who is not in a rush with the delivery is a compound benefit to help minimise vaginal and perineal trauma.

But I am not advocating a woman should have an epidural or vacuum delivery simply to minimise tearing.

The risk of tearing is increased by:

I am not convinced either way about the EPI-NO. It has been marketed well but independent studies of its benefit are lacking. Also, by now, if it was as good as the manufacturer’s claim it would have ‘gone viral’ and be hugely popular. If have had some patients who have used it and had minimal tearing (but this may have been the case anyway) and others where there has been tearing. Logically it should be of benefit, but I am not convinced. I tell patients if they want to buy one and use it then do so. It shouldn’t do harm and logically should do god but I am not convinced and so it is their decision rather than my recommendation.

I am also not convinced that perineal massage in advanced pregnancy makes any difference. There is no logical reason it should and there is no credible study proving it does. It is a bit like rubbing your hands together for weeks before you do gardening hoping that doing so will prevent you getting blisters on your hands.