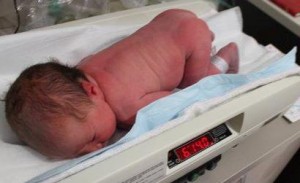 I recently delivered the third baby of a patient who is a Pacific Islander and is a resident of her home country.

She flew to Australia to meet me for the first time when she was 27-weeks’ pregnant. She told me about the very traumatic delivery of her second baby at the local hospital on the island where she lives. It was in 2009. She went into spontaneous labour at 40-weeks’ gestation. She said the labour lasted 24 hours. Although she had a normal spontaneous vaginal delivery of her first baby, she could not push this second baby out. So, she had a vacuum suction cup delivery of her son. His birth weight was 4580 gm. Her first baby had a birth weight of 3300 gm. She was nervous about a repetition of the second delivery experience or worse and so wanted me to be her obstetrician for her third delivery.

This was a considerable decision with consideration that she was going to give birth over 2500 km from home and without any family support except her husband. As well, there was the considerable cost. She was not covered by our Medicare or health fund system and had to pay for everything out of pocket. This included the private hospital fee, my fee, other doctors’ fees (as relevant), etc. As well, there were the costs of airfares and accommodation in Australia.

The baby was measuring two weeks larger that dates when I scanned her at that 27-week visit so I told her she was heading for another big baby. We discussed a plan of management. She was very keen on a vaginal delivery, but without a repetition of her second delivery experience. We agreed for her to return to Australia at 35-weeks’ pregnancy.

At the next visit with me when she was 35-weeks’ pregnant, the baby was measuring by ultrasound scan much larger than average size for her dates. I saw her again the following week and confirmed that this was a big baby and if she went to 40 weeks it was likely to be bigger than her second. I did a pelvic examination and found that she was suitable for induction of labour. I suggested early induction of labour to avoid her baby getting bigger. She agreed.

An induction of labour date was arranged. She phoned her husband so he could fly to Sydney to be with her during labour and delivery.

She was induced at 37-weeks’ gestation. In second-stage labour, with good coaching by the midwife and myself and considerable maternal effort, she had a normal vaginal delivery of a healthy boy who weighed 4480 gm. First-stage labour was reported to have lasted 4 hours and 40 minutes and second-stage labour lasted 30 minutes. The only maternal trauma was a small first-degree perineal tear, which I sutured after delivery.

She and her husband were so happy. She had wanted a vaginal delivery and achieved it. The early induction avoided baby getting too large and so meant she had a much better delivery experience than would otherwise have been the case. Although this baby was only 100 gm smaller than her second, she had a much shorter and more efficient labour and a spontaneous normal vaginal delivery of a healthy baby and with minimal maternal trauma.