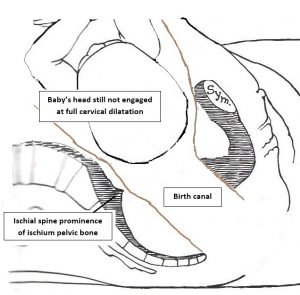 The first time I met Fozia was at 12 weeks gestation in her second pregnancy.

She told me she delivered her first baby in 2006. She told me she went into spontaneous labour at 40 weeks gestation and after 17-hr labour had a spontaneous vaginal delivery of a girl baby who weighed 3.05Kg. She had an epidural for pain relief in labour.

Her second pregnancy progressed well. At her visit at 40 weeks and 1-day gestation, her baby’s estimated weight on ultrasound scan was 3.34Kg. Her cervix was 2cm dilated. Options of ongoing management were discussed, especially with consideration she was going past her EDC and baby was estimated to be larger than her first. She decided that labour should be induced.

Labour was induced when Fozia was 40 weeks and 3 days gestation. Induction was initially with a Syntocinon infusion as the baby’s head was high. Once the head was stable in the upper pelvis due to contractions she had an artificial rupture of membranes (ARM). There was light staining of the liquor by meconium. An epidural was administered for pain relief in labour. The ARM was done at 9.46am. At 13.01pm her cervix was 3cm dilated, at 14.05hrs her cervix was 5cm dilated, at 14.48hrs it was 8cm dilated and at 16.20hrs was 10cm dilated. But the baby’s head remained high, above the level of the ischial spines (bony protuberances half way down pelvic side walls) at station -1. Baby’s heart rate pattern became very abnormal consistent with foetal distress. I was advised and I went to the hospital immediately. The midwife started Fozia pushing while I was on the way to the hospital.

I examined her myself at 17.01hrs. Because of foetal distress, the baby needed to be delivered. But while Fozia was in second stage labour, baby’s head was still not engaged and the lowest point of the head was above the level of the ischial spines. As well there was caput and moulding and the head of the baby. The head was in an occipito-transverse position and was deflexed, resulting in a larger diameter of head presenting than if it was flexed. There was also now haematuria (blood in the urine), consistent with an obstructed labour.

I advised Fozia that an operative vaginal delivery would be very dangerous especially for baby as baby’s head was too high. Baby’s head needed to be engaged in the pelvis to safely do an operative vaginal delivery. With the head being so high in second stage labour it was likely there was cephalopelvic disproportion (baby’s head was too large for the pelvis). This diagnosis was also suggested by the caput and moulding and blood in her urine (trauma of the bladder wall from the head pressing onto it). This cephalopelvic disproportion would be because her second baby was larger than her first, compounded by baby’s head being deflexed with a larger diameter of head presenting.

I advised while she was in second stage labour it was safer for baby (and for her) if I did a Caesarean section delivery. A category 1 Caesarean second was arranged because of the foetal distress. It was done under the epidural anaesthetic that was in place. The baby was born in good condition and had a birth weight of 3.43Kg.

Postnatally mother and baby did well and both have been discharged home.

Cephalopelvic disproportion occurs when a baby’s bony head is too large to fit through the mother’s bony pelvis. That can be due to the head being too big overall for the mother’s pelvis or because it is more deflexed and so there is a larger diameter of the head presenting than would be the case if it was well flexed forward on baby’s chest.  Cephalopelvic disproportion will also occur if the mother’s pelvis is too small or abnormal in shape to accommodate the transit of baby’s bony head.