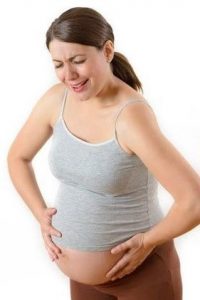 Braxton Hicks contractions are named after the English doctor John Braxton Hicks who first described them in 1872. He reported many women felt contractions without being near confinement. He said this process was usually painless, but caused women confusion as to whether they were going into actual labour.

The occurrence of Braxton Hicks contractions should not be surprising as the uterus is a muscle and muscles contract. The uterus muscle has a skin on the outside called the serosa and a skin on the inside called the endometrium or decidua in pregnancy. When a woman is not pregnant contractions of the uterus muscle facilitate the release of menstrual blood and contribute to menstrual pain.

How can you tell the difference?

How often do Braxton-Hicks contractions happen?

These are contractions that occur in the lead up to true labour. False labour pains do not result in cervical change and can easily be distinguished for the onset of true labour by the obstetrician or midwife doing an internal examination to check for cervical change.

False labour pains in contrast to true labour pains do not become more frequent and stronger and usually settle, though they can recur.

They can result in a woman becoming anxious as she is not sure about the onset of labour. They can be tiring and result in loss of sleep and can be painful (though less painful than true labour).

Usually, when a woman says she had a labour that lasted for days she is also counting false labour pains as true labour. I had that experience with a new gynaecology patient recently who wanted to talk through her first childbirth experience as a public patient. She said her labour was for four days duration. The hospital discharge summary she showed me reported her true labour was only six hours.

A note of caution

On occasions, a woman will arrive at hospital minutes before she delivers or will deliver in the car on the way to the hospital or at home. On quizzing these patients, they did have contractions, but they were coping. They did not want to come to the hospital too soon and they were waiting for their contractions to become more painful. Often, they just thought it was false labour pains they were experiencing.

Just because you are coping with contractions at home do not assume they are false labour pains. If the whole of the uterus is contracting, the contractions are becoming stronger and more frequent (especially if they are every two to three minutes) then give the Birth Unit a call and make your way to the hospital.