I have had two patients recently where despite foetal distress in first stage pregnancy were able to have vaginal deliveries.

The first patient was in her second pregnancy with the first pregnancy ending as a miscarriage because of the baby having a chromosomal abnormality. This pregnancy was complicated by gestational diabetes (managed by diet with 3U insulin/day added at 35 weeks) and intrauterine foetal growth retardation (not enough nutrition getting to baby and so baby becomes malnourished in the womb). At her last antenatal visit with me at 36 weeks, I estimated by ultrasound scan her baby’s weight as being 2.36Kg. Three days later when she was still 36 weeks gestation she was admitted to hospital in spontaneous labour. 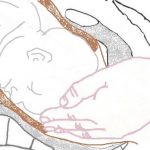 She had an epidural for pain relief. At 8cm cervical dilation, there was foetal distress as shown by the abnormal foetal heart rate pattern. Baby’s head was at station + 2 and was well applied to the fully effaced cervix. I encouraged her to push down with the next contraction while I pushed up the remaining cervix. Her cervix was then fully dilated and the baby’s head was now slightly lower. I used the MityOne vacuum cup to deliver her baby’s head. The baby was born in good condition and had a birth weight of 2.41Kg.

In the second case, it was the patient’s first pregnancy. The pregnancy was uncomplicated. At her last antenatal visit with me at 39 weeks, I estimated by ultrasound scan baby to weigh 3.45Kg. She was admitted to hospital in spontaneous about a few days later. There was an abnormal foetal heart rate pattern consistent with foetal distress in the first stage. It was diagnosed by the midwife when the patient’s cervix was 5cm dilated. The midwife ruptured the membranes at the same internal examination. There was thick meconium staining of the liquor, another sign of foetal distress. 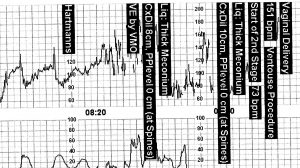 I was called and attended as quickly as possible. I did an internal examination when I arrived. The cervix was now 8cm dilated. There had been 3cm further cervical dilatation in the 15 minutes between internal examinations. Baby’s head was at station 0 and was well applied to the fully effaced cervix. I decided to see if I could push up the remaining cervix which would mean I could safely attempt a vaginal delivery. As well this would be quicker to do a vaginal delivery than a Caesarean section. I encouraged the patient to push down with the next contraction while I pushed the remaining cervix up. It worked! Her cervix was now fully dilated and the head lower at station +1. I used the MityOne vacuum cup to safely deliver her baby’s head. The baby was born in good condition and had a birth weight of 3.30Kg.

When there is foetal distress in the first stage usually a Caesarean section delivery is needed. Occasionally it is possible to safely do a vaginal delivery. To safely attempt a vaginal delivery the cervix must be fully dilated and baby’s head must be engaged in the pelvis. So if foetal distress occurs before full dilatation the remaining cervix must be able to be pushed up so the cervix becomes fully dilated. As well the head must be engaged. To attempt a vaginal delivery when there is still cervix and especially if the baby’s head is not engaged is fraught with danger and risk for mother and baby. In both these cases, the examination findings were similar when I pushed up the cervix. The cervix was fully effaced and 8cm dilated. Baby’s head was engaged and well applied to the cervix. As well there had been rapid progress in labour, which is a very good sign that attempting a vaginal delivery will be successful. With mum pushing down with a contraction I able to successfully push the remaining cervix up so there was full cervical dilatation. That meant I could safely do operative vaginal deliveries in both cases and Caesarean section deliveries were avoided. Both mums were very happy. Both mothers and babies were well after delivery. I must emphasise if the baby’s head was not engaged and if the cervix did not dilate to full dilatation, then this approach would not have been suitable.