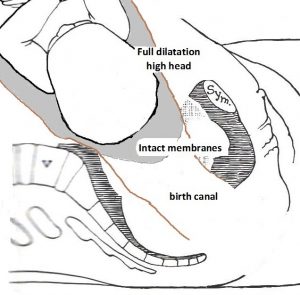 I was woken at about 12.30am by a midwife working in the Birth Unit. A patient had arrived in spontaneous labour and her cervix was now fully dilated. But the baby’s head was very high. The midwife told me the head was still at the level the brim of the pelvis. Membranes were still intact. I advised her I would attend.

When I arrived I told Karen I wanted to do a vaginal examination to check and try to determine why the baby’s head was so high. Karen had a very effective epidural and so my examination did not cause her any discomfort.

I confirmed the baby’s head was still at the level the brim of the pelvis. Antenatal ultrasound scans and clinical assessments had indicated an average size baby that should fit through the birth canal. As well there had been no evidence of hydramnios (extra liquor), another possible reason.  On internal examination, I confirmed there was not a brow (forehead) or face presentation, where the diameter of the baby’s head that was presented was too large for vaginal delivery because it was so deflexed. The baby was in an occipito-posterior position which meant a greater degree of deflexion of the head and so a bigger diameter presenting than if it was in an occipito-anterior position. I was also checking there was no umbilical cord below the head. The head was so high and so poorly applied to the pelvic brim that a loop of cord slipping below the head was certainly a possibility. That was not the case. No umbilical cord was felt.

While doing this very thorough vaginal examination between contractions I accidentally ruptured the membranes. It was good this happened as my hand was in the vagina against the baby’s head when this occurred as I was then able to control the flow of liquor, make sure the head was not displaced sideways with the liquor coming out and also minimise the chances of umbilical cord prolapse.

After the flow of liquor ceased the head was still at the brim of the pelvis but was better applied. I encouraged Karen to push with the next contraction with my hand remaining in place in the vagina against the head to guide the head and to check progress. 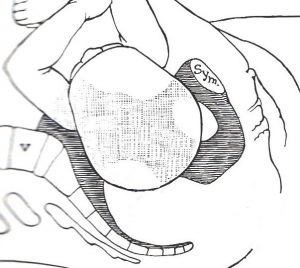 A very unusual presentation with a fabulous outcome.

I frequently get asked in advanced pregnancy: “Is my baby’s head engaged yet?” Often this is because of an erroneous belief that the baby’s head must be engaged before going into labour. This is not the case. ‘Engaged’ is defined as when the widest diameter of the baby’s head is below the level of the brim of the pelvis on abdomen palpation. On internal examination, it is when the top of the head is at the level of the ischial spine, a body landmark on each side of the bony pelvis about halfway down the birth canal.

In Karen’s case, she was in labour, fully dilated and yet the baby’s head had not entered the pelvis!

A woman usually knows when her baby’s head is engaged. She feels a lot more pressure in the pelvis and is not as tight in the upper abdomen.

While the baby’s head being engaged is not necessary for the onset of labour or for induction of labour it is encouraging if it is so. An engaged head implies a more efficient and quicker labour. Sometimes, and especially with the first baby, a head that is not engaged at term is due to an occipito-posterior position of the baby. That implies a more difficult labour. In about 65% of cases occipito-posterior rotate to occipito- anterior during descent through the birth canal in labour. Sometimes this rotation happens at the level of the vaginal entrance just before the head delivers.