Operative vaginal delivery changes during my time as an obstetrician 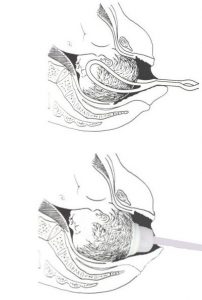 When I started my training as an obstetrician I recall a vaginal delivery was preferred to a Caesarean section delivery. Operative vaginal deliveries were done much more frequently than today. There were various reasons for this including…

When was an operative vaginal delivery done?

The criteria in my time has always been the baby’s head must be engaged in the pelvis. Before my time there were “high forceps’ deliveries (baby’s head not engaged) which were extremely dangerous procedures.

For a forceps delivery the women should be in second stage labour (cervix fully dilated). Occasionally forceps are used when there is still a small amount of cervix (called ‘lip of cervix’ ) present.

In the past a vacuum cup was often applied before full dilatation. The literature reports the vacuum cup being used historically even at 4cm cervical dilatation and without engagement of baby’s head. They would have been very dangerous vaginal deliveries but back in those times a vaginal delivery was preferred to Caesarean section delivery.

The indications for an operative vaginal delivery include lack of progress with pushing in second stage, maternal exhaustion, foetal distress or maternal illness where prolonged “bearing down” or pushing efforts would be risky.

‘Lack of progress with pushing’ in the past usually implied a degree of cephalo-pelvic disproportion (baby’s head being too big for the birth canal). These deliveries had to be done carefully and great skill, because to the increased risk to baby and mother. There was the possibility of a ‘failed forceps’ delivery where it was decided it was too tight a fit for a safe vaginal delivery. In this case a Caesarean section was done.

Epidurals were less common in the past, and so there were fewer cases of ‘lack of progress’ in second stage labour due to lack of pushing or ineffective pushing because of an epidural block.

The vacuum cups we use today had not been invented. It was not unusual  with other older style of vacuum cup of the past for it to ‘come off’ baby’s head with traction and so vacuum cups were less reliable. In the past the cups (Malmstrom vacuum extractor) were  made of metal. There was a choice of shapes. The shape of the cup used was determined on the position of the baby’s head. Cup vacuum was achieved by midwife using a bicycle pump attached indirectly by tubing to the cup.

Success with forceps was predictable, as they never came off the baby’s head. Forceps were always successful in delivery of baby’s head unless the head was found to be too big to the bony birth canal (‘failed forceps’).

The use of forceps has more risk than using a vacuum cup. Because forceps do not come off it was possible to pull too hard and damage the baby with the delivery. I am pleased to report that I have done hundreds of forceps deliveries over many years and have never damaged a baby with their use.

I now prefer to use the vacuum cup to forceps. The cups today are more reliable and are disposable. While I am not worried about damaging baby with forceps, there is usually more maternal trauma than if a vacuum cup is used. There is need, I believe, to always do an episiotomy when using forceps to minimise the risk of significant perineal tearing. That is not the case with vacuum cup. The forceps are placed on the sides of the baby’s head  and so increase the stretch of the vaginal entrance with delivery and increase the likelihood of tearing. The vacuum cup is attached to the top of baby’s head and so does not increase the stretching of the vaginal entrance and does not increase the likelihood of perineal tearing.

Today there are only three types of forceps available in the hospitals in which I deliver.

In the past I have also used ….

Operative vaginal deliveries were done with an epidural anaesthetic block, if an epidural was in situ for labour pain relief. If not then then at the time of delivery there was a caudal regional block inserted or a pudendal nerve block with local anaesthetic infiltration of the perineum for the episiotomy. A caudal regional block and pudendal block are not as effective for pain relief as an epidural block and a forceps operative vaginal delivery could be more painful than desired.

Today there is a much higher incidence of epidural blocks than in the past. As well there is usually no need for a regional anaesthetic when using a vacuum cup as there is usually is no more painful than a spontaneous vaginal delivery.