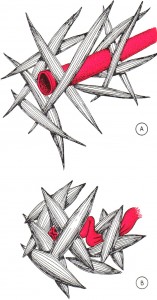 It was S’s first pregnancy. S and her husband are a delightful couple who were very excited about the pregnancy. The pregnancy was uneventful.

At 39 weeks, S was admitted to hospital with spontaneous rupture of membranes. After hours of waiting for spontaneous labour to start and there only being uterine irritability but not labour, we agreed to commence a Syntocinon infusion to stimulate labour. Her cervix was 2–3 cm dilated and about 3 cm long. Her baby’s head was well applied to the cervix but was about 3 cm above her ischial spines.

It took many hours for her to establish in labour, much longer than usual. The increased time to establish may be related to cervical scarring from past cervical surgery. The labour progressed uneventfully, though slower than usual. An epidural for pain relief was much appreciated by S. In second stage labour S said she was too tired to push. As well, the epidural made it harder for her to push effectively. With an effective epidural blocking the pain, I allowed the baby’s head to descend passively with uterine contractions. This made the operative vaginal delivery easier and safer for mother and baby. I used the Mityvac suction cup and delivered her baby without difficulty. There was only a first-degree perineal tear.

Immediately after delivering the placenta, S started to haemorrhage considerably. It was like a tap being turned on. The haemorrhage was due to the uterus relaxing after the delivery. This condition is called ‘uterine atony’. The uterine blood vessels run between the lattices of uterine muscle fibres (A). Normally, with the uterus contracting after delivery of the placenta the vessels of the placental bed are compressed by the contracted muscle fibres and so don’t bleed (B). But in this case, the uterine muscle fibres did not contract sufficiently to compress the blood vessels (A) and so they continued to bleed.

Appropriate measures were taken quickly to both make the uterus contract and so stop the haemorrhage, and to give her appropriate resuscitation fluids. As well, extra nursing and medical staff were called for support because of the amount of bleeding and the impact this had on S’s s clinical status.

Because of the sudden dramatic blood loss there was, for a short period, a marked reduction in S’s blood pressure. For a brief period she went unconscious. Just before S went unconscious she fearfully asked me: “Please don’t let me die”. I responded: “You are not going to die!”

All the actions taken were working. The excessive bleeding had ceased and her blood pressure was returning to normal. She stabilised and all is now well.

S’s husband and mother were in the delivery room during the labour and delivery. So, they were in the delivery room when the postpartum haemorrhage occurred. Her husband wanted to stay in the room during the resuscitation. Her mother was so distressed that she went outside. Her mother said to me: “I never knew anything like this could happen with childbirth”. I reassured them that the haemorrhage had been stopped and that S would be all right. I told S, her husband and mother the reason for the haemorrhage and that she was now out of danger.

S’s plea: “Please don’t let me die” caused me to recall when I was last in Ethiopia. For many years I have been a Director of Hamlin Fistula Australia, a charity that has been successfully funding the amazing work of Dr Catherine Hamlin and her team in Ethiopia dedicated to help women traumatised in childbirth. During my last visit to Ethiopia, we visited a large regional hospital at Mekelle. We were told of three women who had died at the entrance to the hospital the night before we arrived because there was no one with sufficient expertise on duty at the hospital to deal with their complications of childbirth.

Childbirth is one of the most dangerous times in a woman’s life. The maternal mortality rate in Ethiopia is 810 per 100,000 live births, which is considerably more than in Australia (8.4 deaths per 100,000 live births). Maternal mortality is less in Australia because of excellence in hospital facilities and resources and the considerable expertise of obstetricians, midwives and other healthcare professionals in preventing and dealing with complications that can occur.