A sudden turn of events 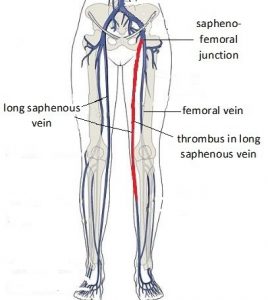 A patient booked with me for management of her 4th pregnancy management. The pregnancy progressed well until 38 weeks and 3 days gestation. That evening she became aware of painful vein swelling in her left thigh. Her GP arranged a doppler ultrasound scan the next morning. The ultrasound scan found there was extensive thrombus (blood clot) in the long saphenous vein that extended from the calf to sapheno-femoral junction. Because of the findings on ultrasound scanning, he asked her to see me that day.

I was operating in theatre that morning. When I returned to the office at 1.00pm my secretary showed me the ultrasound report. I was concerned about the increased risk of pulmonary embolism.  A pulmonary embolism happens when blood clot breaks away from the thrombus in the vein in her lower limb and travels in the blood to her lungs. There it will block a lung (pulmonary) artery or one of its branches and so will have consequential adverse health implications. Pulmonary embolism can cause heart damage, can cause pulmonary hypertension (by damaging part of the lung because of the lack of blood flow to lung tissue), will reduce oxygen levels in the blood, can damage to other organs in the body because of a lack of oxygen, can cause death if the blood clot is too large or if there are multiple blood clots.

While there is usually a minimal risk of a pulmonary embolism with a superficial vein blood clot, in her case the risk was considerably more. Not only was the amount of thrombus more than usual but what was more concerning was the thrombus ended where the long saphenous vein joins the femoral vein, which is the major deep vein in the lower limb. There was a greater risk of pulmonary embolism than if there was a small deep vein blood clot in her calf.

My secretary had arranged for her to see me at 2.00pm. She attended with her husband. I discussed the findings and their implications with them. I advised her the usual management is to start a high dose of anticoagulant (blood thinner). But at 38 weeks and 5 days pregnant labour was imminent. To be anticoagulated in labour and with childbirth would put her at risk of life-threatening haemorrhage. As well she could not have an epidural in labour, if requested.

I suggested an alternative approach – induction of her labour that day. She should have a good efficient labour which consideration of this being her fourth baby, uneventful labours and deliveries in the past, and with favourable findings on internal examination. I said once baby was delivered I could safely start anticoagulant therapy.

She agreed. She went home to sort out a few things and to get her hospital bag. She then went to the Birthing Unit at the hospital. The induction was started at 6.30pm. She required an artificial rupture of membranes (ARM) and a Syntocinon infusion. I wanted an efficient labour, so she delivered well before midnight for safety reasons. There is less staff support during the early hours of the morning if there is a problem. Her labour lasted 21/4 hrs. She requested an epidural for pain relief in labour. She had a normal vaginal delivery with an intact perineum. She had a baby girl who was born in good condition and with a birth weight of 3555gms.

I contacted a vascular surgeon during the afternoon. He saw her while she was in labour and arranged anticoagulant management after delivery. She was initially commenced on the blood thinner Clexane by subcutaneous injections at 40mg twice per day and then after 2 days the dose was increased to 80mg twice per day. This is considerably more than Clexane prophylaxis dose when someone is at increased risk of thrombosis because of medical or obstetric history or for planned major surgery. The prophylaxis dose of Clexane is 20mg or 40mg daily.

Her postnatal course was uneventful. He lochia loss was not excessive. She is breastfeeding her daughter.

A further doppler ultrasound scan was done 4 days after delivery. This reported occlusive thrombus up to 10cm in length in the long saphenous vein.

She has been discharged home on Clexane at 100mg daily. She will be followed up by the vascular surgeon because of the thrombosis. I will follow her up myself for 6-week postnatal visit unless there is need to see her prior.

The development of a very extensive superficial vein thrombus and of superficial vein thrombus to level of the sapheno-femoral junction in pregnancy is very uncommon. Management varies with consideration of the situation. If this had happened at an earlier gestation of pregnancy, then it would have been anticoagulant therapy which would have been stopped for labour and delivery. But in this case, being at such an advanced gestation the more appropriate action was induction of labour and then after delivery anticoagulant therapy.