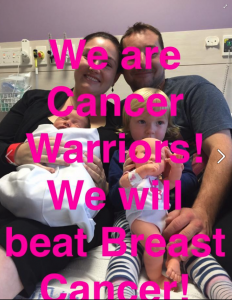 It was Monday afternoon last week. Rebecca attended with her husband Russell for her antenatal visit at 38 weeks 6 days gestation. She had had a right breast biopsy the previous Thursday and was anxious to find out the result. The result had just come through. I had to tell her the very sad news that she had breast cancer. The report said she had Grade 2 invasive ductal breast cancer.

Rebecca was very breast aware especially in advanced pregnancy this time because of the difficulties she had had with breastfeeding following her first pregnancy. She had noticed a small lump in her breast about three weeks prior, but didn’t think anything of it suspecting it was due to breast changes in advanced pregnancy. She began treating it like a blockage in a duct and attempted to gently massage the lump in the shower and using heat packs.  She became concerned when she noticed the lump increased in size. She saw her GP who gave her a referral for a breast ultrasound scan. The scan was scheduled the Thursday before her she saw me. The radiologist was concerned about the appearance of the lump and so suggested a breast biopsy. The biopsy was done at 3pm the same day.

It was Rebecca’s second pregnancy and had been uncomplicated. She is 32 years old and there was no relevant past history including no family history of breast cancer.  The cancer was reported as being oestrogen and progesterone receptor negative suggesting it was not related to hormone changes in pregnancy.

Rebecca, Russell and I were all devastated by this news. It was so unreal that is should be happening to Rebecca.

I said to Rebecca the first thing we needed to do was to deliver her baby. Once her baby was delivered we could focus on treating her breast cancer. I phoned the Birth Unit and was told there were no spots for induction until the following Saturday. It was Monday and that would not be appropriate. I explained the situation and asked if Rebecca could go to the hospital for induction now. While it was about 4.30pm I was keen to have Rebecca deliver as soon as possible so we could focus on the cancer. Despite their obvious shock and concern, Rebecca and Russell were keen on this idea. The midwife said yes. Rebecca and Russell arranged for their daughter to be picked up from childcare and went to the hospital for induction of labour.

Rebecca’s labour went well and she had a spontaneous vaginal delivery in the early hours of Tuesday morning. While Rebecca, Russell and I lost some sleep because of the late time in the day of the induction, it was worth it. Their son Aidan was born in good condition and had a birth weight of 3522gms.

Sadly, I had to suppress lactation. While Rebecca had been keen to breastfeed, to do so would have interfered with treatment of her breast cancer.

I phoned a very good breast surgeon who she saw while she was still a postnatal inpatient. Her breast cancer treatment will start after there is more assessment of the tumour.

I am optimistic all will go well and this cancer will be beaten!

Rebecca has posted her story on Facebook and can be viewed on my Facebook site at https://www.facebook.com/DrGarySykes.Obstetrician. She is fiercely determined to use her story as an opportunity to create awareness, as her situation is unusually rare, and was detected early due to her vigilance and persistence in checking her breasts regularly. You can follow her story and provide her the encouragement she will need to spur her along via her “My Lifeline” page.

Breast cancer during pregnancy is very rare, and happens in about 1 in 3,000 pregnancies. While there are breast changes in pregnancy, especially in advanced pregnancy that can make breast assessment more difficult than would be the case for a non-pregnant woman if a breast lump is noticed then it should be further assessed. The easiest and safest way of doing this is by a breast ultrasound scan.