Challenging pregnancy with a good outcome 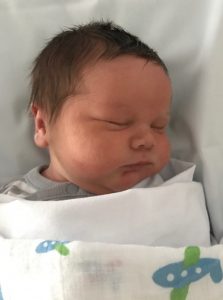 I was very excited to see a wonderful patient for the first antenatal visit of her second pregnancy. Sadly, her first pregnancy had not worked out as she had a mid-trimester loss.

She has been diabetic since as she was five years old. She has an insulin pump and is under the care of a very good endocrinologist for her diabetes management. She was requiring about 38 units of insulin per day to keep her blood sugar level in the normal range at the outset of her pregnancy. She also has had hypertension since 2011 and was taking an antihypertensive medication called Labetalol.

Another management consideration was she had lumbar spine fusion surgery in 2012 because of spine damage when she had been in a motor vehicle accident. She told me the orthopaedic surgeon advised her against becoming pregnant, but she wants to have a baby and so did not take this advice. So, he advised her she should have Caesarean section delivery rather than a vaginal delivery as a vaginal delivery may put too much strain on her back. She agreed to this.

Her first visit with me was at seven weeks pregnant and all was well. Her pregnancy progressed uneventfully until 27 weeks. Her insulin dose gradually had increased to 52 units per day. It is normal for insulin requirements to increase in pregnancy. At this 27-week pregnancy visit her baby measured larger than average size and as well there was extra liquor fluid around the baby, a condition called hydramnios.  While hydramnios is associated with diabetes there can be other causes such as the baby having an abnormality. While her morphology scan at 19 weeks pregnancy had not shown any baby abnormality, I sent her for a further ultrasound scan at Sydney Ultrasound for Women. Sydney Ultrasound for Women is a specialised pregnancy ultrasound scan unit with obstetrician trained doctors and sonographers who have had special training in pregnancy ultrasound scanning and so have greater expertise. The scan confirmed hydramnios and that baby was larger than average size (58th centile). They could not find any abnormality to account for the hydramnios. What a relief!

At 33 weeks of pregnancy, she was admitted to hospital with threatened preterm labour. While this can happen to any pregnant woman preterm labour it is associated with overstretching of the uterus that occurs when there is hydramnios.  Two injections of a steroid called Celestone Chronodose were administered in a 24-hour period in case there was preterm delivery. The Celestone Chronodose would help mature baby’s lungs and so minimise the risk of the preterm baby having respiratory distress syndrome (RDS) (also called hyaline membrane disease (HMD)). There was increased of this not only because of preterm delivery but also because of diabetes. The threatened preterm labour was successfully managed using glyceryl trinitrate (GTN) patches. The contractions settled.

Celestone Chronodose resulted in a dramatic increase in her blood sugar level and insulin requirements. This is common with steroid use in pregnancy. She now required 94 units of insulin per day to keep her blood sugar in the normal range. Her insulin dose had been 65 units per day before the first steroid injection was administered.

Her insulin dose requirements then started to fall as the steroid effect wore off. That was expected. But when it continued to fall and was a level less than it was prior to the steroid injection (viz. to 60 units per day) I became concerned about the possibility of placental insufficiency. Consistent with this was her blood pressure had increased and there was biochemical evidence of preeclampsia developing superimposed on her background hypertension.

When she was 36 weeks 5 days I was phoned by the obstetrician subspecialist doctor working at Sydney Ultrasound for Women and told me they had just completed an ultrasound scan assessment of the baby and they were very worried as the baby now had a markedly abnormal doppler blood flow studies suggesting considerable increased risk to baby’s well-being. The measurements were checked several times to make sure they were accurate, especially as such finding would be more consistent with the baby being growth retarded, which was not the case. The baby’s overall size was now on the 93rd centile. That meant the baby was large for dates. The hydramnios continued.

I phoned the patient and discussed the findings. While she had also had a cardiotocogram (CTG) that day with a normal foetal heart rate pattern I said it was safer if we delivered her baby. Having lost her first baby, with all the problems this pregnancy, being at almost 37 weeks and having had steroid injections to help mature baby’s lungs it was more sensible to deliver baby rather than having any the risk to her unborn baby’s well-being.

I discussed the situation with the paediatrician and arranged to do a Caesarean section early that evening. The Caesarean was done under a spinal anaesthetic. The needle was sited at a higher intervertebral space than that levels that had had the fusion. The operation was uneventful.

The couple had a healthy baby boy with a birth weight of 3685gms. He was admitted to Special Care Nursey for monitoring but did not have any breathing problems or any other problems.

Mum’s postnatal course was uneventful. She was discharged home successfully breastfeeding her son. Her insulin dose was down to 35 units per day when discharged. I look forward to seeing her and baby at her six-week postnatal visit.