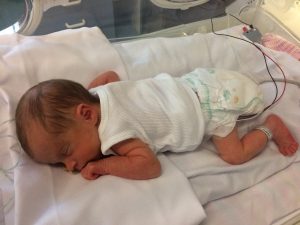 Adriana saw me with her husband for a pre-pregnancy consultation. She saw me for a second opinion. She wanted to discuss her obstetric history and my thoughts as to what could be done so she had a good pregnancy outcome next time.

She had a history of three unsuccessful pregnancies and no successful pregnancies. She had not been under my care for the three pregnancies. In 2014, she had a miscarriage at nine weeks. In March 2015, her baby died at 18 weeks pregnant. She had presented with bleeding and an ultrasound confirmed her baby had died. She responded quickly to a medication to bring on labour. There was a full autopsy of the baby and placental histopathology. The conclusion was there was massive perivillous fibrin deposition (MPFD) in the placenta. As well her baby was growth retarded. In 2015, she conceived again. She began bleeding from 5 weeks of pregnancy. An ultrasound at 14 weeks suspected early growth retardation of her baby and the placenta looked abnormal with increased volume and fibrin deposition. In October 2015 when she was 14 weeks pregnant her baby died. She had a suction curettage of uterus. The histopathology conclusion was that fibrin deposition in the placenta was the probable cause.

She had a history of two proven and possibly three pregnancy losses due to MPFD. MPFD is deﬁned by the existence of massive deposits of ﬁbrin in the placenta. Fibrin is a fibrous protein that the body makes to help with blood clotting when there is an injury. When there is MPFD there is abnormal deposition of fibrin in the placenta which prevents it from functioning normally. Consequently, the baby does not get adequate nutrition in the womb. Its presence is associated with an increased risk of growth retardation and intrauterine foetal death. MPFD is associated also with preeclampsia, preterm rupture of membranes and preterm labour and delivery. MPFD is a rare condition. It is still relatively unstudied and its cause is unknown. Adrianna had had an extensive workup done looking for background conditions that would predispose her to MPDF and for other possible causes for her pregnancy losses. The results were normal. MPFD has a high recurrence rate, as has happened for Adrianna.

After her third unsuccessful pregnancy, Adrianna saw an obstetrician who had subspecialised in maternal and foetal health problems. This obstetrician suggested, on the logical assumption that MPFD is due to overactivity of the maternal immune system, that with her next pregnancy management should be with a combination of daily low dose aspirin, daily subcutaneous injections of Clexane (a blood thinning drug) and daily oral steroids.

I talked through the background with Adrianna and her husband and what could be done next time in her management. I suggested further tests to check for any other issues that may be relevant. I told her I agreed with what the other obstetrician suggested. 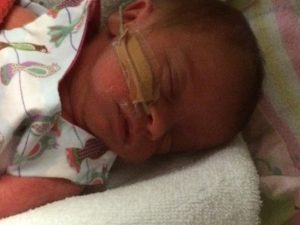 Adriana saw me next for a follow-up visit. I went through results from the further tests I had arranged. These results did not change the planned management. I suggested Clexane injections throughout the pregnancy was a very good idea and that it was logical to add low dose aspirin and oral steroids. I advised her that she is in largely uncharted waters and there was no proven medical accepted approach to her management. I said I was quietly optimistic that the combination of Clexane, aspirin and oral steroid medications should work and she should have a good pregnancy.

Adrianna was understandably very nervous about trying again. Adrianna recalls I said to her at her: “You have to ‘bite the bullet’ sometime”. I said to her I would be there with her and supporting her on her pregnancy journey.

She decided to start trying straight away. I suggested she started on Clexane at 40mg per day by subcutaneous injections and aspirin at 150mg per day orally straight away and we could consider introducing the prednisolone when pregnant. She was nervous about taking oral steroids throughout all the pregnancy because of the possible impact oral steroids could have on her baby. I reassured her that oral steroids had not been shown to cause malformations but could after long-term treatment cause temporary suppression of her baby’s adrenal cortex function and reduced birth weight. Both these possibilities were manageable and if taking steroids throughout the pregnancy meant the difference between a viable pregnancy or otherwise, it was worth it.

Adriana saw me for her first antenatal visit when she was six weeks pregnant by the date of her last menstrual period (LMP). She was on Clexane at 40mg per day, aspirin 150mg per day and folic acid at 5mg/d. After further discussion Prednisolone was introduced at 25mg per day orally.

She had an elevated blood sugar level result with her initial pregnancy blood tests. An oral glucose tolerance test was arranged by me and the result was abnormal. Diabetes was diagnosed. I referred her to an endocrinologist for management. Diet changes only were needed in its management.

Because of her history, Adrianna requested to see me each week of her pregnancy. I agreed. At each visit I did an ultrasound scan of her baby, monitoring its size, growth and wellbeing. Baby’s size, growth and wellbeing and the placental appearance was normal until her morphology scan at 19 weeks. I arranged for this to be done at an ultrasound unit which specialises in pregnancy ultrasound. Her baby measured smaller than dates by 11 days. Otherwise, all was normal. The placenta had a normal appearance.

Further ultrasound scanning was arranged at a specialised pregnancy ultrasound unit. Initially, they were each two weeks. Baby’s growth slowed and was on the 3rd centile and then less than the 3rd centile. That meant more than 97 of 100 babies at the weeks of pregnancy were bigger than her baby. While the baby was small it was growing and each week was bigger in size than the week prior. All else was ok with the ultrasound checks and the placenta appeared normal.

From 24 weeks pregnant, she had external ultrasound scanning done weekly. As well as her pregnancy progressed Adrianna closely monitored her baby’s movement and there was CTG (cardiotocogram) checks to monitor baby’s oxygenation. I was keen to continue the pregnancy as long as possible as long as the baby was growing and its wellbeing was satisfactory.

At 32 weeks, Adrianna was administered two doses of Celestone Chronodose over 24 hours to help mature baby’s lungs and minimise the risk of immature lungs (Hyaline Membrane Disease) after birth. The ultrasound scans were starting to suggest her baby would be needing delivery soon. Clexane and aspirin were ceased as these would prevent her from having an epidural with childbirth. An epidural would be too dangerous with her using blood thinners as there was an increased risk of haemorrhage into the epidural space.

At 33 weeks and 1 day pregnant Adrianna presented to hospital with spontaneous rupture of membranes and uterine irritability. Her baby now weighed about 1.2Kg by ultrasound scan estimate. Her baby had been in a breech presentation for the last two weeks. I discussed the situation carefully with the paediatrician and then with Adrianna and her husband. I explained while I was confident the baby was unlikely to have immature lungs (Hyaline Membrane Disease) and while by gestation she could have her baby at the private hospital where she had booked with me doing the delivery, there were other newborn challenges that were possible with her baby being so small and on balance it was safer for her to deliver at a hospital with a neonatal intensive care unit. She agreed. Her transfer was arranged and she had a Caesarean section delivery later that day. Her daughter was born in good condition and had a birth weight of 1190gms.

Mother and baby have both done well. Adrianna has been discharged home while her daughter is in the newborn special care unit, growing and without any significant problems.

I am so thrilled for Adrianna and her husband that all has worked out so well. There would have been MPFD this pregnancy. MPFD would have been the reason for the severe intrauterine foetal growth retardation, preterm rupture of membranes and preterm labour. But with a combination of blood thinner medications and oral steroids we could contain it and lessen the impact of MPFD on the pregnancy and so give Adrianna and her husband the beautiful little girl they so desperately wanted.