“I have been having hypo’s more often.” 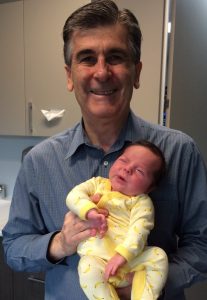 Sherree saw me for management of her first pregnancy. She had been a diabetic for five years before her pregnancy.

Before her first visit with me, she had an appointment with her endocrinologist. Prior to being pregnant, he had managed her diabetes with oral medications – Metformin and Diamicron. Now that she was pregnant he switched her to insulin. As well her blood pressure was elevated when she saw him and so he commenced her on Aldomet.

Sherree’s first visit with me was when she was eight weeks pregnant. She was already needing considerable insulin (124 units) each day to keep her blood sugar level in the normal range. She was requiring 250mg of Aldomet twice per day to maintain a normal blood pressure.

Her pregnancy overall progressed well. Her insulin and requirements gradually increased, as expected. At 35 weeks pregnant she was on 186 units of insulin per day. She also had biochemical evidence of preeclampsia on a background of hypertension. She now required an Aldomet dose of 1000 mg four times per day to maintain her blood pressure in the normal range.

I had advised her, as I do all pregnant patients with diabetes managed by insulin, that they can expect increasing insulin requirements as the pregnancy advances. That is because the hormones released by the placenta in pregnancy that cause the mother’s blood sugar level to increase and also and makes her body less sensitive to insulin-less able to use it properly. Hence more insulin is required to keep the blood sugar level in the normal range.

Sherree contacted me on a Sunday evening by Facebook private messaging when she was 36 weeks gestation to say that she had falling insulin requirements. She stated in her message: “I have noticed that my BSL has been low and I haven’t had my insulin at least once a day and I have been having hypo’s more often.”

I read this message about 10 pm that Sunday evening. Alarm bells went off. The falling insulin requirements implied there could be placental insufficiency, which would put the baby’s life at risk. My other concern was that her baby would not tolerate her blood sugars being too low. That implied her unborn baby would also have low blood sugar levels and as a consequence was at risk of dying in the uterus.

I phoned Sherree and asked her to attend the hospital immediately for further assessment.

At the hospital, there was monitoring of the baby and further diabetes and preeclampsia assessment done. Her insulin requirements continued to be dramatically less than it had been, but her preeclampsia was stable. I advised Sherree that is was too dangerous for her baby to continue the pregnancy and that we should deliver her baby soon.

The steroid Celestone Chronodose was given to Sherree to help mature her baby’s lungs. At 36 weeks pregnant there is an increased risk of the baby having hyaline membrane disease (immature lungs) that is the case later in the pregnancy and so needing ventilation support after birth. This risk was greater because of the diabetes.

I assessed Sherree vaginally for the possibility of a vaginal delivery. The cervix was not suitable for induction. I suggested a Caesarean section delivery. That was done under a spinal anaesthetic and was uncomplicated. Her son was born in good condition with a birth weight of 3150 grams.

Postnatally mother and son have done well. Sherree’s insulin needs to be reduced immediately after birth as is usual. Also, I was able to reduce her Aldomet to 500mg for times per day.

The impact of these changes gradually increases during the pregnancy. Hence we do the diabetes screening at about 28 weeks when it is likely if there is going to be gestational diabetes it will be manifest. In high-risk cases, there is screening in early pregnancy. A normal oral glucose tolerance test result at 28 weeks’ pregnancy does not mean that gestational diabetes will not develop later in pregnancy. I have had quite a number of scenarios such as this has happened and diabetes has been diagnosed in the third trimester of pregnancy. Hence I check a patient’s urine each visit for sugar. If there are clinical concerns such as a very large baby or hydramnios (extra amniotic fluid around the baby) then diabetes checking will be repeated.

Diabetes can affect the unborn baby in a number of ways…

These considerations are much more likely in insulin-dependent diabetics, especially those who are more severe.

During my years working in Oxford, England I had extra training in the management of diabetes in pregnancy. I have managed hundreds of pregnant women with diabetes of all different grades of severity over many years. The keys to a good outcome are good patient compliance, the patient conscientiously trying to maintain optimal blood sugar levels during pregnancy, being diligent in patient’s pregnancy management and good communication with the patient and the support of a good endocrinologist.