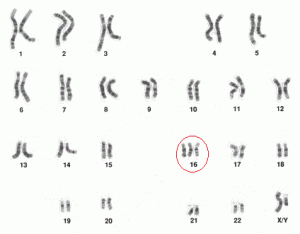 I saw a couple today for follow up after her third miscarriage.

She and her husband had been seen by a subfertility subspecialist who had done extensive investigations re recurrent miscarriage prior to this pregnancy and no abnormality was found.

I did an ultrasound scan of her baby at the first antenatal visit. I had to sadly advise her that there had been foetal demise. The baby measures 6 weeks (crown-rump length) and there was no foetal heart motion.  They were devastated.

She had suction curettage of uterus done by me. I sent tissue for histology and chromosome studies.

The histology report was degenerate immature products of conception.

The karyotype was reported  47, XY, +16 or a male conceptus with trisomy 16, which is consistent with spontaneous pregnancy loss, and is the second commonest karyotype cause for miscarriage.

Advising her of the reason for her pregnancy loss was very helpful in closure.

I advised her I have no insight into why she had miscarried the two prior times but this recent miscarriage should be regarded as a ‘one-off’ and have no bearing in the future. She was relieved.

She will start trying again soon.

I advised her that I wanted to see her early in her next pregnancy for close pregnancy monitoring. This was not because of her last pregnancy loss but her previous two. Hopefully all will work out well next time.

I find knowing the reason why a miscarriage has happened helps the grieving couple move on and plan for the future with more confidence. It also helps me in planning appropriate management of the next pregnancy.