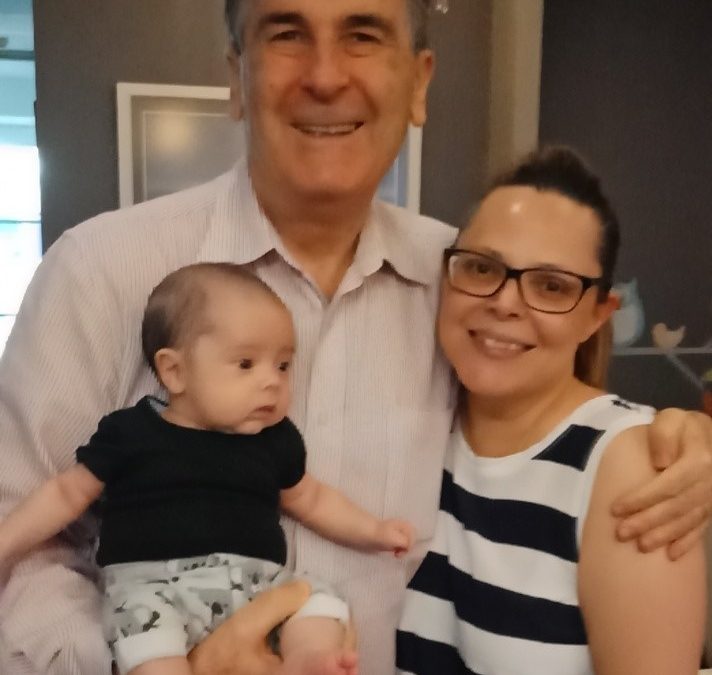 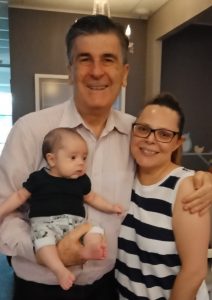 pregnancy, which was successful.

She told me in her first pregnancy she had a placental abruption with threatened preterm labour at 23 weeks pregnancy. At 24 weeks her membranes ruptured and then there was foetal distress. That prompted a decision to do an emergency Caesarean section. She gave birth to a little girl weighing 575gms, who survived only 42 days. She had been managed as a public patient.

Two weeks after delivery she was readmitted to a public hospital with fever and abdominal infection. An abdominal CT reported “collection within the utero-vesical space adjacent to the Caesarean, inseparable from the uterus and adjacent small bowel loops with surrounding inflammation. Communication with the adjacent small bowel loops is not excluded and remains a possibility. 32 x 18 mm subcutaneous collection over the right lower abdomen is also noted.” She was treated with intravenous antibiotics and ultrasound guided drainage of the abdominal wall collection. She remained in hospital eight days.

She then had two first trimester miscarriages.

Her first pregnancy with me as her obstetrician pregnancy progressed well though a routine morphology ultrasound scan at almost 19 weeks pregnancy reported cervical shortening (cervix was 2.7cm long) and cervical funnelling was seen. This suggested cervical incompetence.

I advised Catherine that I was worried about cervical incompetence in view of the ultrasound findings. If that was the case it meant she would deliver very prematurely, with all the adverse implications.  Personally, I have not been impressed about vaginal progesterone pessary use to prevent cervical dilatation. I have always had success with a cervical suture. I suggested to Catherine that I should insert a cervical suture to strengthen her cervix and prevent it opening preterm and so to prevent her delivering preterm because of cervical incompetence. I advised her that while her recollection of what had happened in her first pregnancy was not suggestive of cervical incompetence, I could not ignore the ultrasound scan findings. I did not want her to deliver her baby prematurely because of a problem that could have been prevented.

At 19 weeks pregnancy I inserted a cervical suture. I commenced her of prophylactic low dose antibiotics, which she stayed on for the duration of the pregnancy. This was to minimize the risk of the cervical suture causing any infection problem. A tocolytic medication (drug to stop uterine contractions) was given by injections while in hospital to minimize the risk of uterine irritability with the cervical suture insertion operation. In view of the difficult history with her first pregnancy I prescribed an oral tocolytic medication long term.

I started seeing her weekly. This was both for her own reassurance (she was becoming more nervous about the pregnancy) and, so I could monitor her more closely.

The pregnancy progressed well, though she needed to continue to rest and remain on the tocolytic medications because of uterine irritability.

We decided on delivery at 37 weeks. That was because Catherine was understandably becoming more nervous. As well I did not want her going into labour with the cervical suture in situ and with the uncertainty about the details of her previous Caesarean section. It was likely that the lower segment had not been that developed at 24 weeks, and so there was increased risk of uterine rupture with advanced gestation and especially with labour. A further injection of Celestone Chronodose was given to minimize the likelihood of both immature lungs and transient tachypnoea of the newborn. We wanted it to be a ‘family friendly’ Caesarean section with her baby and her partner staying with her in theatre and recovery ward and then going to the postnatal ward as a family. We did not want her baby having to be admitted to the Special Care Baby Unit with breathing problems.

The Caesarean section delivery done at 37 weeks and 3 days gestation and was uncomplicated. She had the operation under a combined spinal-epidural anaesthetic. Her daughter Sienna was born in good condition and had a birth weight of 2430gms.

Her operation was a challenge because of adhesions. Her small bowel and omentum (fat attached to the bowel) were adherent to the inside of the abdominal wall. These adhesions were divided carefully avoiding traumatising bowel. Then the abdominal wall was closed in all layers, which is my usual practice. I suspect this had not been at her first Caesarean section because of the considerable adhesions and the considerable midline gap of her rectus abdominis muscle. I suspect the adhesions were also due to postoperative infection that necessitated her readmission after her first delivery. After completing the Caesarean section, the cervical suture was removed.

Mother and daughter were discharged home together with Catherine successfully breastfeeding Sienna.

I next saw Catherine when she was referred because of premature menopause and wanted to have another baby. She said her mum went through the menopause when she was 37 years old and Catherine was now 36 years old. She has been experiencing symptoms consistent with a climacteric. She has had no periods since she ceased the pill. Her FSH and LH hormones were elevated (FSH 81.7 IU/L (postmenopausal range 25 – 130), LH 47.4 IU/L (postmenopausal range 5.0 – 62)), and oestradiol hormone low (<50 pmol/L (postmenopausal <170)). Her AMH was very low at 0.2 pmol/L (normal range 1.1 – 53.5), consistent with being postmenopausal. A pelvic ultrasound showed no follicles in her right ovary and only two in her left ovary. We talked through donor egg. She said her youngest sister was happy to provide an egg.

I next saw Catherine six months later for pregnancy management. The pregnancy had happened through spontaneous conception. I was delighted. She was nine weeks pregnant at her first antenatal visit with me. At 12 weeks I inserted a cervical suture

This pregnancy Catherine again had uterine irritability. A tocolytic medication was commenced at 32 weeks pregnancy. Her pregnancy continued otherwise uneventfully until 38 weeks 0 days when she was admitted to hospital with spontaneous rupture of membranes. An elective Caesarean section and tubal occlusion had been planned for few days later. This was done under a spinal anaesthetic with removal of the cervical suture at the end of the operation. Catherine and her husband were blessed with a healthy little boy with a birth weight of 2600gms who they called Bentley.

I was very happy to find that her there was no midline gap of her rectus abdominis muscle this time and abdominal cavity was free of adhesions, except for minimal adhesions under her umbilicus. My surgical care and attention to detail last Caesarean section had paid off and she had healed well. I carefully closed her abdominal layers again this time.

I last saw Catherine at her 6-week postnatal visit she and her son were both doing well.

I have wonderful job, especially because I can really ‘value add’ to someone’s life. With good care, excellent patient compliance and careful management Catherine has been blessed with two wonderful children.

Catherine’s history also illustrates you can never say never. Even though all indications were that the last pregnancy would not have occurred through spontaneous conception, that was not the case.  This happened despite all the markers pointing to premature menopause. I tell women that if you want to have baby to keep trying. So often a successful pregnancy will happen even with a history of recurrent miscarriages or difficulty to conceive. But if you quite trying conception will not happen. To keep trying has an emotional toll, but if you have success the journey is worth it.