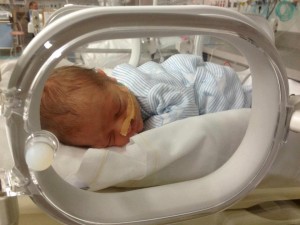 I was in the special care nursery to visit the babies of two patients I recently delivered. Both patients needed delivery at 35-weeks pregnancy because of pre-eclampsia.

Pre-eclampsia is one of the commonest complications of pregnancy. While in most patients it is mild, it can be severe and present developments that are life-threatening for mother and/or baby.

It is a poorly understood condition that can adversely affect a woman’s blood pressure, kidney function, liver function and blood clotting. It can affect placental function and so for the baby, it can adversely affect the baby’s growth and wellbeing. It will present in different ways in different pregnant women as is illustrated by these two patients.

Managing pre-eclampsia is a balancing act. With close monitoring and careful management as appropriate, we want to continue the pregnancy as long as safely possible until there is not the risk of prematurity (37 weeks). But if the situation significantly deteriorates prior to then, such that the life and/or wellbeing of the mother and/or her baby are at risk, then her baby is delivered, irrespective of the weeks of pregnancy. This may be needed less than 30-weeks pregnancy in severe cases.

The first patient of these two patients had an uncomplicated pregnancy until her visit at 34-weeks pregnancy when her blood pressure was slightly elevated at 130/90. There was no protein in her urine and she felt well. Her baby measured about one week smaller than dates by ultrasound scan estimation at that visit.

I discussed the results with her. I advised that the pre-eclampsia check had to be repeated and, if the results were consistent, she would need to be delivered as it was too dangerous for her to continue the pregnancy. I did an internal examination to assess her suitability for induction of labour. Fortunately, her cervix was two centimetres dilated and so induction of labour was possible. The examination findings were unusually good, especially with it being her first pregnancy. It was like her body was saying this environment is not good and the pregnancy should end soon. Her blood pressure remained 130/90 and there was no protein in her urine.

Once admitted she was given two injections of the steroid Celestone Chronodose at 12 hours apart to help mature her baby’s lungs and so minimise the risk of her premature baby having breathing problems after birth (respiratory distress syndrome).

After confirming the blood tests results, and after the Celestone Chronodose injections, labour was induced. She laboured well with the total duration being eight hours. Because of an effective epidural, she could not deliver her baby with pushing. I used the vacuum cup to safely deliver her son. He was born in good condition and had a birth weight of 2215gms. He recovered well in the special care nursery. The patient had an intact perineum with the delivery. Her liver function improved after delivery, but the results were still slightly abnormal when she was discharged. I will recheck the liver enzyme levels before her six-week postnatal visit.

The growth of the baby of the second patient gradual fell off in the second half of her pregnancy. Although growing and appearing biophysically well at each visit, the baby was measuring on ultrasound less than expected at each visit. There was no obvious reason until the 30-weeks pregnancy visit when her blood pressure increased to 150/85. There was no protein in her urine. I did a pre-eclampsia blood test work up. Her uric acid, platelet count and liver enzyme levels were all normal. At 32-weeks pregnancy her blood pressure was 170/100 and so I commenced an antihypertensive medication. The baby had grown but at a suboptimal rate and appeared to be otherwise well. She had no protein in her urine. Her uric acid was now elevated for pregnancy at 0.33 mmol/L. Her platelet count and liver enzyme levels were all normal.

At 33-weeks pregnancy, I increased her antihypertensive medication dose as her blood pressure had increased again. She had no protein in her urine. Her uric acid was 0.32 mmol/L and liver function and platelets counts were normal. At 34 weeks, her blood pressure was 135/80 and there was no protein in her urine, but I was concerned about her baby’s lack of growth. Her baby’s weight was <3rd centile for 34 weeks and six days at 1758gms. The baby’s ultrasound biophysical monitoring of wellbeing and her baby’s cardiotocogram (CTG) or foetal heart rate monitoring were both satisfactory. I admitted her to the hospital for more intense monitoring. As well, she was given two injections of the steroid Celestone Chronodose 12 hours apart to help mature her baby’s lungs and so minimise the risk of her premature baby having breathing problems after birth (respiratory distress syndrome). There was more intense monitoring.

She and her baby remained in a stable condition in hospital. On the sixth day of admission, her foetal ultrasound assessment was repeated. There had been slight growth (1891 gms). There was reported normal foetal welfare studies except there now was reduced liquor volume (oligohydramnios). There was a concern that there was further deterioration in placental function. The CTG tracing was normal. As well, there was further elevation of her blood pressure and the need to increase her antihypertensive medication. Her blood results remained stable with her uric acid being 0.32 mmol/L and liver function and platelets counts being normal. Now there was now also significant proteinuria onward dipstick checking.

I decided it was too dangerous, especially for her baby, to continue the pregnancy. She had a Caesarean section delivery under a spinal anaesthetic. The presentation had been breech throughout the pregnancy and, as well, she had requested a Caesarean section delivery at her first antenatal visit. She had a little girl who weighed 1850gms at birth. Her daughter recovered well in the special care nursery.

There was a significant concerning increase in the patient’s blood pressure immediately after delivery requiring extra medications to stabilise. It has now stabilised, and she had been discharged home on a lower dose of antihypertensive medication. I will be reviewing her regularly regarding her need for antihypertensives as it will decrease in the postnatal period.

These are examples of two different presentations of pre-eclampsia, both requiring early delivery and both with good outcomes.