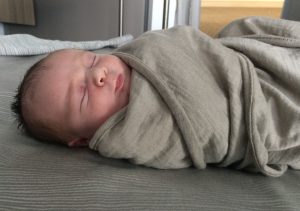 Recently a patient delivered her third baby. Her previous two deliveries had been managed by another obstetrician. I was advised by the patient that they were uneventful pregnancies and deliveries and so I anticipated similar this time.

All was progressing well. She had the routine 28-week pregnant blood tests. The results indicated that her platelet count had fallen from 254 x 109/L in early pregnancy to 129 x 109/L. It was now below the normal range, but not at a level that was concerning. Thrombocytopenia is defined as a platelet count below the lower limit of normal. The normal platelet count range is from 150 to 450 x 109/L. 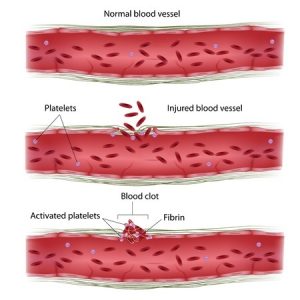 Platelets are cells within the blood that stop bleeding when there is blood vessel trauma. Platelets do this by clumping together and forming plugs in blood vessels at the site where the vessel is traumatised. The formation of a blood clot prevents ongoing bleeding. With childbirth, there is blood vessel trauma. So if the number of platelets is very low then dangerous bleeding occurs. If a pregnant woman’s blood does not clot she will have life-threatening haemorrhage with childbirth and if this bleeding is not addressed she will literally bleed to death.

The lower the platelet count the greater the risk. While a platelet count of 129 x 109/L is low it is only considered a mild thrombocytopenia and is not associated with increased haemorrhage risk during childbirth.

There was no history of thrombocytopenia in her previous two pregnancies. There were no other issues this pregnancy (such as preeclampsia) that would be likely reasons for low platelet count and so the likely cause was a pregnancy induced autoimmune condition where her body produces antibodies against her platelets. A platelet cell lives for only about 10 days. The bone marrow produced new platelets to replace old platelets. Her platelets were being destroyed at a faster rate than they were being produced by her bone marrow.

Pregnancy-induced thrombocytopenia is a well-recognised but uncommon condition. I have had quite a number of patients with it over the years. It is usually only mild and is self-limiting and will resolve after childbirth. I explained to her that all that was needed was rechecking her platelet count closer to her due date and planning management from there. If her platelet count had decreased significantly then oral steroids could be given. The steroids should reverse the trend and restore her platelet count to a level that was safer for childbirth. I have successfully used this approach in the past.

Another consideration was that her baby was starting to measure large for dates by ultrasound scan. There was no background to this except her other two babies had larger than average birth weights. Her first baby had a birth weight of 3.86Kg. She went into spontaneous labour at almost 41 weeks pregnant. She had normal vaginal delivery after about 24 hours of labour. In the second pregnancy, her labour was induced at 40 weeks. Her second labour lasted about 12 hours. She had a normal vaginal delivery of a baby weighing 3.81Kg.

She asked me at her first antenatal visit with me if she could be induced at 40 weeks. I agreed. With her baby starting to measure large for dates I was increasingly keen on this idea, to minimise the childbirth difficulties that were of greater likelihood if her baby was large.

I was also concerned that her baby continued to measure large for dates on the ultrasound scan. I had an independent scan done at the SAN Ultrasound for Women. They agreed the baby was larger than average size and estimated the baby as being on the 70th centile for birth weight. In view of the baby’s size and her personal preference Induction of labour was planned for 40 weeks gestation.

In spite of the oral steroids, her platelet count decreased to 76 x109/L.  I contacted the haematologist at the Sydney Adventist Hospital where she was booked for delivery. A further blood workup was arranged by the haematologist. Again there was no obvious reason for the thrombocytopenia other than autoimmune.

Her platelet count the next day was down to 60 x109/L. After discussion with the haematologist, I arranged for her to have an intramuscular steroid injection in the hope that this would reverse the thrombocytopenia trend. Oral prednisone was continued. The next day her platelet count increased to 67 x109/L.

The following morning her platelet count dropped to 64 x109/L. I discussed the situation with the patient. I advised her I recommended her labour to be induced as soon as possible.  I said that the steroid approach to her management was not working and I was worried if we continued the pregnancy she could have a lower platelet count and that would be even more dangerous for childbirth. As well I wanted her to deliver at a reasonable time of the day and not in the early hours of the morning, which could happen if she went into spontaneous labour. That is because there is minimal and delayed backup support available in the early hours in all hospitals and if there was severe haemorrhage with childbirth it would be much more dangerous for her at that time of the day. There also was the consideration that her platelet antibodies could have crossed the placenta into the baby’s circulation which meant that her baby could also have a thrombocytopenia and need attention after birth. Finally, I was concerned about the generous size of her baby. I wanted her to have an easy vaginal delivery which would be the least traumatic childbirth option for her and her baby. This would more likely be the case if I didn’t let her unborn baby get any larger.

Her cervix was favourable for induction and so it should be a straight induction process. With two vaginal deliveries in the past, I anticipated a good outcome to this strategy.

She agreed. A downside to proceeding with induction was her platelet count was too low for her to have the epidural that she planned. Most anaesthetists I discussed this with will not insert an epidural block if the platelet count is less than 100 x109/L. Her situation was discussed with a senior obstetric anaesthetist who understandably declined to give her an epidural block. There was an increased risk of haemorrhage with the insertion of the epidural and around the epidural catheter. Such haemorrhage could result in damage to a nerve or the spinal cord and subsequent paralysis. The patient was very upset about not being able to have an epidural but did reluctantly accept this. She knew she would have to rely on nitrous oxide gas and intramuscular Pethidine for pain relief in labour.

A Caesarean section delivery was discussed as an option. I decided against that as there were far more trauma and risk of haemorrhage than would be the case with an easy vaginal delivery.  As well it was likely the anaesthetist would want her to have a general anaesthetic rather than a regional anaesthetic block.

A platelet transfusion was discussed with the haematologist. It is considered unsuitable in this context. The underlying autoimmune mechanism that is destroying the patient’s platelets will also destroy donor platelets.

Labour was induced with an ARM (artificial rupture of membranes) and intravenous Syntocinon infusion. This was more suitable, controllable and predictable in action than using prostaglandin gel. She was 39 weeks gestation.

Fortunately, she did labour efficiently and went onto have a normal vaginal delivery with an intact perineum. The total duration of labour was only two hours, much quicker than her previous labours. There was normal blood loss in association with the delivery and no concerns about postpartum haemorrhage. Extra precautions were taken in case there was extra haemorrhage. Extra drugs to minimise the risk of a postpartum haemorrhage were given as a precaution.

Her daughter was born in good condition with a birth weight of 3900 grams. The birth weight was consistent with what was estimated by ultrasound scan. Her baby was somewhat, but not excessively, large for dates. She was larger than her previous two babies and born at a slightly earlier gestation. Cord blood was collected to check her baby’s platelet count. The baby’s platelet count was normal. It was wonderful for her to have a daughter after having two sons.

Postnatally there were no issues. The last platelet count that the patient had before her discharge was 148 x109/L. It was almost back to normal. This postnatal return to a ‘normal’ platelet count was consistent with it being a pregnancy induced autoimmune problem. The haematologist has arranged for platelet antibody checking. The result isn’t available yet.

The patient has been discharged home well and is successfully breastfeeding her daughter.

This case is an example of ‘a low-risk pregnancy does not mean no risk pregnancy’. This patient had no history that would suggest that this thrombocytopenia problem would have occurred. With careful management and excellent patient cooperation, this patent’s potentially life-threatening pregnancy complication was identified and successfully managed.