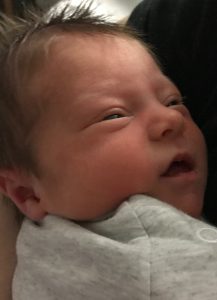 Hannah saw me for management of her first ongoing pregnancy. She had two miscarriages in the past. There was no relevant history except she was hypothyroid and was taking thyroxine.

The pregnancy started well. The first visit with me was at 10 weeks and there were no concerns.

Her pregnancy was progressing well. She had her routine morphology scan at 19 weeks and 0 days. This was done at Sydney Ultrasound for Women (SUFW), a specialised pregnancy ultrasound unit where the obstetrician-trained doctors and sonographers have had extra training in pregnancy scans and so should have a very high level of accuracy. The baby measured 8 days less in size, though all else appeared well. At her dating ultrasound scan and the scans done by me at her earlier two visits, the baby had been a right size and so this fall off in growth was a new development.

I arranged for Hannah to have a foetal growth and well-being scan at SUFW at 22 weeks pregnant which reported ‘Foetal estimated weight is on 16th centile for 22 weeks. There is a mild degree of biometric asymmetry with the abdominal circumference on the 4th centile. No evidence of foetal compromise on biophysical or Doppler assessment. The uterine artery Doppler studies show high resistance. A review of interval growth in about 3- 4 weeks may be worthwhile’.

The next ultrasound scan done at SUFW was at 26 weeks and 4 days’ pregnancy. The baby was now estimated to be on the 9th centile in size. There was no evidence of foetal compromise on biophysical or Doppler assessment. The left uterine artery had increased resistance.

I checked for reasons for the baby being ‘small for dates’. There was no preeclampsia, no diabetes, or no other health issue. An infection screen was done and there was no evidence of infection. The baby appeared to have normal morphology on all on scans. An amniocentesis was done to check for a chromosomal abnormality in the baby. The NIPT screening test result had been normal but this only checks for the common autosomal abnormalities (Trisomy 21, 13 and 18) and sex chromosome disorders. The baby had normal chromosomes. So, we did not have any obvious reason for the baby being ‘small for dates’.

I explained to Hannah it was most likely a ‘placental insufficiency’ problem where the placenta is unhealthy and was not allowing enough nutrients to get to the baby from the mother.  If so careful baby surveillance was needed for the rest of the pregnancy. There was a risk of the placental also preventing baby from getting enough oxygen from the mother’s blood. I saw Hannah more often for antenatal visits. There was careful monitoring including scanning her baby at each visit. The baby was growing but at each visit had an estimated size that was about two weeks less than dates. I encouraged Hannah to check baby’s activity regularly. Less than 10 foetal movements in 12 hours or a sudden drop off in foetal activity needed further assessment in case it reflected impaired foetal oxygenation.

A scan at SUFW at 37 weeks and 1 day reported: ‘The baby now measured less than the 3rd centile for 37 weeks and 1 day.’ Baby’s weight was estimated to be 2058 gms. The baby’s head width (BPD) was on the 12th centile, head circumference on < 2nd centile, abdominal circumference on < 2nd centile and femur length on < 5th centile. I discussed the situation with Hannah and her husband. I suggested as she was now 37 weeks, delivery of her baby should be considered. I suggested induction of labour. Hannah agreed. Celestone Chronodose x 2 injections over 24 hours were given to help minimise the risk of the baby having immature lungs (Hyaline Membrane Disease).

The induction of labour at 37 weeks and 4 days started well. An epidural was administered for pain relief in labour. In the first stage labour, there was foetal distress. This was indicated by an abnormal foetal heart rate (CTG) pattern and meconium staining of the liquor. I had explained to Hannah and her husband that there was an increased risk of foetal distress in labour as the baby was ‘small for dates’ most likely due to ‘placental insufficiency’ and so baby may not cope with the increased stress in labour. Baby only gets oxygen between contractions. So, when foetal distress did happen Hannah and her husband were mentally prepared.

Hannah had an emergency Caesarean section delivery under the same epidural anaesthetic. The baby was born in a vigorous condition and had a birth weight of 2444 gms (10th centile for 37 weeks 4 days).

Postnatally mother and baby both did well and Hannah and her baby have been discharged home with Hannah successfully breastfeeding her daughter.

Baby’s birth weight was greater than the SUFW scanning estimated. Ultrasound scan weights are only estimates based on estimates of the width of the head, head circumference, abdominal circumference, and femoral bone length. It well recognised there can be errors despite the expertise of the scanning unit.