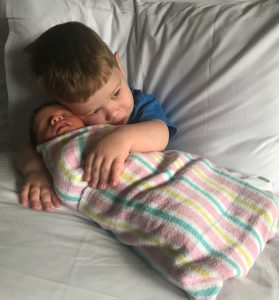 Desiree saw me initially for management of her first pregnancy in 2015. She had been an insulin dependent diabetic since she was five years old and was requiring 30 units of insulin per day when I saw her for her first antenatal visit. She also had a history of hypertension since 2011, though was not requiring medication. She’d been involved in a motor vehicle accident in 2000 and consequently had lumbar vertebrae (L4/5) fusion. She had been advised by her spinal surgeon to have a Caesarean section delivery. Sadly, this pregnancy was not successful.

Desiree returned for management of her next pregnancy in 2016.  This time she was requiring 38U/d insulin per day via her insulin pump to keep her blood sugar in the normal range. She was also taking Metformin 2gms/d and for her hypertension Labetalol 100mg/d.

When she was 33 weeks pregnancy, she was admitted to hospital with threatened preterm labour. She was given Celestone Chronodose to help minimise the risk of her baby having hyaline membrane disease (immature lungs) if she had a preterm delivery. Fortunately, management of her threatened preterm labour was successful and the pregnancy continued. But the steroids played havoc with her blood sugars and resulted in her insulin dose going from 65 units per day up to 94 units per day.

Her insulin needs then started to fall as one would expect but because it kept on decreasing, I became concerned about the possibly of placenta insufficiency. But, on the other hand, there was ultrasound evidence of her baby being large for dates. As well, there was hydramnios.

With her endocrinologist’s excellent help her blood sugars and insulin requirements were stabilised. Her insulin dose remained then at about 60 units per day. Her baby’s wellbeing was checked again by ultrasound scan as well are foetal heart rate monitoring.

Desiree was almost 36 weeks gestation when this next scan was done. I had a phone call from the pregnancy ultrasound specialist doctor to say that there were impaired Doppler blood flow studies. The ‘cerebro-placental’ ratio was reported less than the 5th percentile. This implied significantly reduced foetal brain blood flow. As well the ultrasound scan suggested the baby was on the 93rd centile (large for dates) and there was hydramnios (extra amniotic fluid around baby). I discussed these concerning findings with Desiree and advised her that the safest option was to deliver her baby.

Therefore, Desiree had an emergency Caesarean section delivery when she was 36 weeks gestation. It was done under a spinal anaesthetic and was uncomplicated. Her son was born in good condition with a birth weight of 3685 grams. There was excess liquor as suspected. Her son’s birth weight was consistent with the ultrasound scan estimate. He was admitted to Special Care nursery for a very brief period but did not have any problems.

Desiree saw me for management of her next pregnancy in 2018. At her first antenatal visit at 9 weeks gestation. She was requiring 50 units per day of insulin via her insulin pump and was taking Metformin 2gms/d. She was not on medication to reduce her blood pressure. Her pregnancy was monitored closely and progressed uneventfully. At 35 weeks her baby was measuring on the 93rd centile size by ultrasound scan and there was moderate hydramnios. She was now requiring 67units of insulin per day to keep her blood sugar in the normal range. Monitoring was increased. At 36 weeks she developed uterine irritability. Two injections of Celestone Chronodose were given over 24 hours to help minimise the risk of her baby having hyaline membrane disease (immature lungs) and she was booked for a Caesarean section delivery when she was 37 weeks gestation. I advised Desiree there was the increased likelihood of labour happening very soon with her overdistended and irritable uterus. If labour and delivery did happen in the early hours of the morning it would result in greater risk, especially for her baby. The Caesarean section was done under a spinal anaesthetic and was uncomplicated. Her daughter was born in good condition with a birth weight of 3370 grams.

Gestational (pregnancy induced) diabetes is becoming a common complication of pregnancy with up to 12% of pregnant women in Australia developing it. It is a kind of diabetes that is detected in pregnancy usually in the 2nd trimester, in contrast to type 1 diabetes, that has existed pre-pregnancy (onset often in childhood). There are many risk factors for gestational diabetes to occur, as opposed to type 1 diabetes where there is usually no known reason why it happens.

In contrast, Desiree has type 1 diabetes. She has had type 1 diabetes since she was five years of age. With type 1 diabetes the pancreas has no ability to produce any insulin at all so people need to titrate their daily insulin doses based on how their body reacts to numerous physical, emotional and environmental influences. Desiree uses an insulin pump to deliver her insulin 24/7 to regulate her blood glucose level depending on her daily life influences.

When a woman has any kind of diabetes there are unique challenges for the woman and their healthcare team to collaborate together on a regular basis so that optimal maternal, foetal and neonatal outcomes are achieved.

I have had training in the specialist field of diabetes in pregnancy management and as a result have successfully managed hundreds of women with diabetes over many years, including other patients with journeys similar to Desiree’s. By building a therapeutic relationship between patient and clinician as well as offering timely care by an experienced endocrinologist, the likelihood of achieving a pregnancy without complication is highly probable.