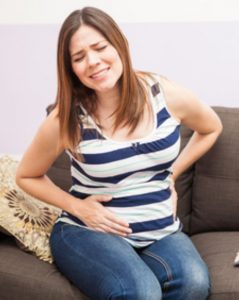 Acute appendicitis can be a very difficult diagnosis to make in pregnancy. Because of this, there can be a delay in making the diagnosis and surgically dealing with the inflamed appendix. With a delay, there is an increased morbidity risk. Appendiceal rupture occurs more frequently in pregnant women, especially in the third trimester, possibly because of delay in diagnosis, the extra challenges and reluctance to operate on pregnant women. As pregnancy advances the surgery needed to manage appendicitis is not the usual approach that is done when a woman is not pregnant. This is because the large uterus denies the usual access to the appendix. There can be other non-appendiceal reasons for pain in the appendix area and the usual supporting checks for diagnosing appendicitis are difficult to interpret in pregnancy.

I have recently had two patients present to accident & emergency (A&E) departments of two hospitals with suspected appendicitis in pregnancy. How the suspected diagnosis was managed was very different. 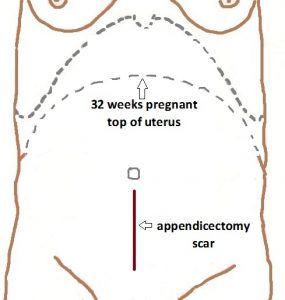 The first patient was 32 weeks pregnant. She presented to the A&E department of a local public hospital, rather than the A&E department of the private hospital where she had booked for confinement. Appendicitis was suspected and surgery arranged. She had a large vertical midline incision made in her lower abdominal wall to access the appendix, because of the large uterus. Her appendix was located and removed.  She made a good recovery. She was advised if she laboured early she may need a Caesarean section as the abdominal wall would not have fully healed. Fortunately, this did not happen. She went on to have normal vaginal delivery, with me doing the delivery, at the private hospital where she had booked for confinement.

The second patient presented with pain suggestive of appendicitis to the A&E department of the private hospital where she had booked for confinement. She was 21 weeks pregnant at the time. A specialist surgeon attended. I also attended. The surgeon said to me it was a more difficult diagnosis to make in pregnancy and he did not want her to have an appendicectomy operation unnecessarily. Even though it was a Saturday he could arrange for her to have an MRI scan of her appendix. MRI scanning has an accuracy of 91-95% in diagnosing appendicitis. While MRI scanning is slightly less accurate than CT scanning, it is a safer option in pregnancy. The MRI scan suggested she did not have appendicitis. She rested in hospital for a few days with close monitoring. Her pain settled and she went home. The pain was due to another non-appendix reason. Her pregnancy continues and she has not had an operation.

In both cases, patients had pain that mimicked appendicitis in location and character. Neither patient did have appendicitis.  Both attended A&E departments with the pain. In the first case, where the patient attended the public hospital, there was surgery (with all its risks and potential implications for her and baby) and a normal non-inflamed appendix was removed. Now she has a large lower abdominal wall scar. In the second case, where the patient attended the private hospital, there was an MRI scan of the appendix and no surgery was done.