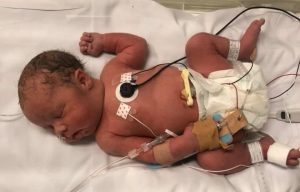 I first met Nicole in 2015. She had been admitted to hospital with hyperemesis gravidarum. It was her second pregnancy. Her first pregnancy had to be ended at 29 weeks by Caesarean section delivery after she developed HELLP syndrome. HELLP (Haemolysis, Elevated Liver enzymes, Low Platelets) syndrome is a very severe life-threatening form of preeclampsia. A pregnancy must be ended when HELLP syndrome is diagnosed, irrespective of how many weeks the pregnancy has reached, because of the huge risk to the mother’s life if the pregnancy continues.  It was a successful outcome for Nicole of a daughter with a birth weight of 1294gms. Nicole made a good recovery and her daughter has done well.

I advised Nicole to have HCG checks each two weeks for six months. A negative HCG result for six months implied there was no residual molar tissue in her uterus and so it was safe for her to try again.

Her third pregnancy was in 2017. Sadly, that was a non-viable pregnancy. I did a suction curettage of uterus. The histology showed ‘immature degenerate products of conception, without any concerning features.’

I next saw Nicole in August 2018. She was 8 weeks pregnant by dates. All appeared well. It was a viable pregnancy and there was no evidence of molar changes of the placenta. I commenced her on the blood thinners Clexane and low dose aspirin in view of her history of HELLP syndrome in her first pregnancy. I also asked her to attend to see me weekly throughout the pregnancy because of her obstetric history.

At 31 weeks she developed preeclampsia. I commenced her on the antihypertensive medication Aldomet and started weekly preeclampsia biochemical monitoring. While her blood pressure was under control on a modest dose of Aldomet and she had no protein in her urine, her uric acid level increased. Because of this at 33 weeks I gave her two injections doses of the steroid Celestone Chronodose. It was likely preterm delivery would be required and the Celestone Chronodose would help mature baby’s lungs and so minimise the likelihood of baby having breathing problems after birth because of lung immaturity. Now between her weekly visit with me she attended the Birth Unit at the hospital twice weekly for CTG (baby heart rate) monitoring and blood pressure and urine checking.

When she was 34 weeks and 4 days pregnant, she attended the Birth Unit as she was feeling unwell with epigastric discomfort. She said it was a similar feeling to when she had HELLP syndrome in her first pregnancy. Her blood pressure was at the upper end of the normal range and there was only a trace of protein in her urine. While her blood pressure and urinalysis finding were not concerning, I arranged for her to have another preeclampsia blood check.

The results indicated a dramatic change in her wellbeing. There was further renal function impairment with an increase in her uric acid level and now also an abnormal creatinine result. Her platelet count (which had been normal) had fallen to 68 x10 ^9 /L (normal range 150 – 450). Her liver enzyme levels were normal. A coagulation study was then arranged, and the results were normal.

Platelets was essential for blood clotting. Because of the low platelet count and deteriorating kidney function I decided to do an emergency Caesarean section. Fortunately, the blood thinners aspirin and Clexane had been ceased so these were not a concern. Her platelet count was too low for her to have a regional anaesthetic. The Caesarean section had to be done under a general anaesthetic She was given a platelet transfusion at the start of the operation to minimise the risk of excessive bleeding because of her thrombocytopenia (low platelet count).

The operation went well. Nicole had a baby girl weighing 2690gms. That was very generous weight, especially with her having preeclampsia. Blood loss was not excessive, and a blood transfusion was not required. She did have an iron infusion postnatally.

Nicole thereafter made an uneventful recovery. Her abnormal blood results gradually returned to normal. Her antihypertensive medication (Aldomet) was ceased before her discharge.

Her daughter also has done well. She did not have respiratory distress syndrome. After her stay in the Special Care nursery she was discharged to be with mum and has done extremely well. 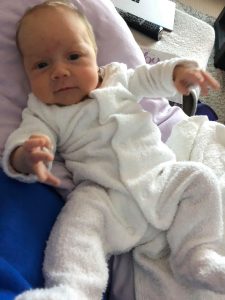