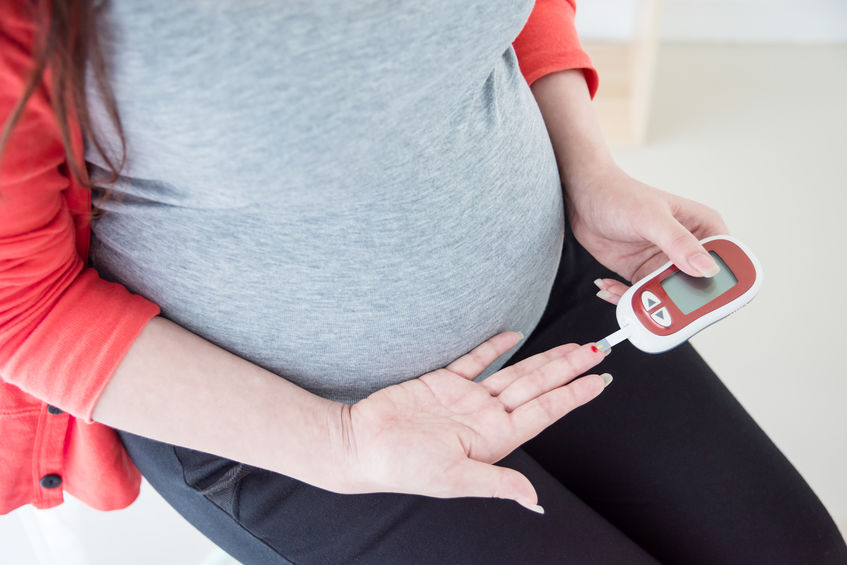 There are two types of diabetes encountered in pregnancy. 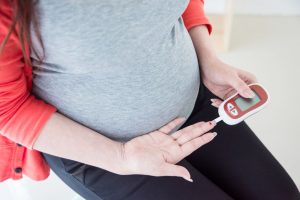 On most occasions it is gestational (pregnancy induced) diabetes. This is diabetes that has its onset in pregnancy and usually resolves after delivery.

Gestational diabetes is a relatively common adverse development in pregnancy. It is now reported to occur in about 15% of pregnancies.

A few women are diabetic pre-pregnancy. They usually have insulin dependent diabetes. These women will need more insulin in pregnancy to maintain a normal range blood sugar (glucose) level (BSL). After delivery, their insulin requirements will usually go back to their pre-pregnancy level.

Background to diabetes in pregnancy

Diabetes is where there is too much glucose (sugar) in the bloodstream and consequently a pregnant woman’s BSL increases to an abnormally high level.

Glucose is an important source of energy. The hormone insulin is needed to allow glucose in the bloodstream to enter the body cells and be used for energy. Insulin is made by the pancreas gland.

During pregnancy some of the hormones produced by the placenta reduce the action of insulin. The pancreas then needs to produce extra insulin to keep her BSL in the normal range. This happens in all pregnancies. If a woman has pre-pregnancy diabetes, then her insulin requirements gradually increase as the pregnancy advances. If a woman is not diabetic pre-pregnancy, then gestational diabetes will develop if her pancreas is unable to produce enough insulin to keep her BSL in the normal range. This is a gradual process and consequently the onset is unusually before the 24th week of pregnancy. Most gestational diabetes happens by 28 weeks. I have had some patients where gestational diabetes is not apparent until the last weeks of pregnancy (with normal diabetes checking results prior).

After delivery, her BSL usually goes back to what it was pre-pregnancy. That means gestational diabetes usually resolves with delivery of her baby.

A woman with gestational diabetes is at increased risk of it happening again in subsequent pregnancies and later in life.

If a woman had diabetes pre-pregnancy, then her insulin requirements usually go back to what they were pre-pregnancy.

What are the risks of not maintaining a normal range BSL in pregnancy?

Diagnosis and incidence of Gestational diabetes

When I started my training to be an obstetrician gestational diabetes was suspected if a pregnant woman had significant sugar in her urine (1+ or more on dipstick checking) or her baby was large for her weeks of pregnancy (‘large for dates’). She would then have an oral glucose tolerance test (OGTT) and if the result was abnormal gestational diabetes was confirmed. During the 3 days preceding the OGTT, 150 g of carbohydrate should be eaten (approximately ten 40 g slices of bread per day). As well the woman should fast for six hours prior to testing. If gestational diabetes had not been diagnosed and her baby was born with macrosomia (much larger than average size) then an OGTT was done after delivery.

It is now recommended all pregnant women (who are not already diabetic) have a 75gm two-hour OGTT at 26 to 28 weeks of pregnancy. There is no need for any diet changes before the OGTT, but the pregnant woman needs to be fasting for at least six hours prior to testing.

The pregnancy OGTT result is considered abnormal if one or more of the three BSL results is elevated. The BSL is elevated (abnormal) if…

It is also recommended that all low-risk pregnant women have a random BSL level check organised at their first antenatal visit. If there are increased risk factors for diabetes, then an OGTT should be done in the first trimester of pregnancy instead of a BSL check.

Being aware that there can be diabetes problem before 26 weeks, or a woman can develop gestational diabetes in first advanced pregnancy (OGTT at 26 -28 weeks with normal results) because increased insulin demands in later pregnancy, I check a pregnant woman’s urine at each antenatal visit for glucose. If there is significant sugar in her urine (1+ or more on dipstick checking) or if in later pregnancy her baby is significantly large for her weeks of pregnancy, then I arrange for her to have an OGTT. I have diagnosed gestational diabetes even a term gestation with this checking regime.

The Australian Government reported1 1 in 7 (15%) of pregnant women had gestational diabetes in 2016–17. The incidence increased with age (26% in the 45–49-year-old age group). There was also an increased incidence in women of socioeconomic disadvantage, women born in Asia, northern Africa, and the Middle East and in aboriginal and Torres Strait Islander women.

It is reported the incidence of gestational diabetes has almost quadrupling prevalence over the last decade. Rising rates of maternal overweight and obesity, increasing maternal age and the diversity of ethnicity are key epidemiological impactors, overlaid by the 2015 changes in screening and diagnostic parameters.

Pregnancy is usually a challenge because of the increased importance of maintaining BSL readings in the normal range. I have had many women who because they have had diabetes for years have been ‘a bit slack’ in maintaining optimal BSL levels. It is essential in pregnancy for the wellbeing of baby and to minimise the risk of diabetes complications to have normal range BSL readings.

On occasions diabetes is diagnosed in the first trimester of pregnancy. This is not usually gestational diabetes, but rather the woman had undiagnosed diabetes when she conceived.

A pregnant woman is considered at high risk of gestational diabetes in these cases:

What will be the impact of diabetes on your antenatal care and delivery?

But please do not be anxious. I have successfully managed many hundreds of pregnant women with diabetes, including many who were diabetic pre-pregnancy and on high doses of insulin at their first antenatal visits.  With proper treatment and diligence in maintaining a normal range BSL I am confident all will go well in your pregnancy despite having diabetes.

What can you do pre-pregnancy to minimise the likelihood of gestational diabetes?

These is increasing diabetes in the community. This has been attributed to unhealthy eating habits, lack of exercise and increasing obesity by an increasing number of Australians. The best ways you can help minimise the likelihood of having a gestational diabetes problem is…

The recommended guidelines are…