Was the cervical suture necessary? 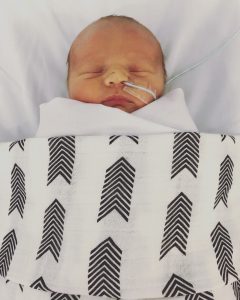 Stephanie’s first antenatal visit with me was at 7 weeks and 6 days gestation.

It was her second pregnancy, but first ongoing pregnancy. She had had a miscarriage in 2016. She advised me she had had a cervical LLETZ operation and two cone biopsies for management of CIN (cervical intraepithelial neoplasia). These operations remove cervical tissue and so can weaken the cervix. Having three such operations can have a compounding adverse impact on the strength of the cervix. The gynaecologist told her at the time that her cervix may not be strong enough for pregnancy.

As the uterus gets bigger in pregnancy there is more pressure on the cervix (the uterus opening to vagina). If the cervix is weak it will open prematurely because of the increasing pressure and weight of the pregnant uterus. This will result in preterm delivery. This can happen any time after 20 weeks and so a baby can be born very prematurely. An extremely premature baby is at risk of not only newborn death and but also of severe complications from extreme prematurity which can result in handicap and brain damage.

At 12 weeks pregnancy I arranged for her cervix was checked by a specialist pregnancy ultrasound unit. Her cervix measured 2.5cm long on ultrasound scan. This was considerable shorter than the usual cervical length of 4.0 cm at 12 weeks. While there was not opening (call ‘funnelling’) of the inner end of her cervix, I was concerned about her short cervical length and her history of a LLETZ procedure and two cone biopsies. I was concerned her cervix could open during mid-pregnancy and she could deliver a very premature baby.

I discussed the findings and my concern with Stephanie. I advised there were three options of care:

This finding was consistent with considerable cervix having been removed with her 3 cervical surgeries.  The findings are shown in the adjacent drawings with the normal cervix been represented in drawing A and Stephanie’s cervix been represented in drawing B. I suspected the length of her cervix was less than the 2.5cm measured on ultrasound scan. All I could see at the top of her vagina was the dimple of the external cervical os (opening), which showed where the cervix was located. Her cervix being flush with the top of the vagina and poorly defined made the procedure technically more difficult. I inserted a catheter into Stephanie’s bladder to avoid a full bladder. A full bladder would make the operation more difficult and was associated with increased risk of damage to the bladder with the operation. I attacked long metal forceps instruments to the anterior and posterior cervix just anterior and posterior to the external cervical os. I then applied traction on the forceps, pulling them down in the direction of the vagina to make the cervix more accessible.  I then transversely incised (cut) the skin where I suspected the anterior cervix joined the vagina. I incised just above where the anterior forceps instrument was attached to the cervix. I then pushed the bladder up and away from the cervix. I wanted the bladder out the way to safely to maximise the length of cervix below the suture. I then did a small midline transverse

incision of the skin high on the back of the cervix where it joined the vaginal skin. The Mersilene suture has needles both ends. While her cervix was not visible as it was flush with the vagina, I could feel the sides of the cervix digitally. One needle was introduced through the small posterior cervical skin incision, run below the skin (subcutaneously) around the cervical side wall and exited the anterior cervix through the anterior incision. This process was repeated on the other side of the cervix with the other needle. The suture had circumnavigated the cervix and the ends had exited the cervix anteriorly.  The  procedure is shown diagrammatically in the adjacent diagram. The needles were cut off. Downward pressure was applied to the cervix and the suture ends were tied in a knot anteriorly. The suture was as high as possible on the cervix. The suture knot was at 12 o’clock on the cervix for easy suture removal. Excess suture material distal to the knot was then removed.

Stephanie was given prophylactic antibiotics and another drug to stop the uterus contracting. Uterine contractions can happen because of such a procedure. She was also kept overnight in hospital for rest and monitoring.

Stephanie was discharged home on prophylaxis low dose antibiotics. Infection is a concern with a cervical suture. Years ago, I knew a wonderful pathology lab collection lady who had died from septicaemia due to a cervical suture. This lady was not my patient. I also advised Stephanie to abstain from sexual intercourse during the pregnancy.

The pregnancy continued uneventfully until 33 weeks and 2 days gestation.  Stephanie was admitted to hospital was spontaneous rupture of membranes. She did not have temperature. A high vaginal swab was taken for infection checking. It did not grow any pathogens and so was negative for infection. Baby’s heart rate pattern (cardiotoocogram) was normal. She was given an initial dose of a steroid called Celestone Chronodose to mature baby’s lungs, as it was likely she would deliver preterm. As she was less than 34 weeks gestation and after discussion with paediatrician, she was transferred to a local public hospital which had a neonatal intensive care unit. The cervical suture was removed at the public hospital in case there was a grade intrauterine infection caused by the suture that had caused the rupture of membranes. As well, it was dangerous for her to go into labour with the suture in situ as there could be nasty tearing of the cervix. Prophylactic oral antibiotics were continued. A second dose of Celestone Chronodose was given.

When Stephanie achieved 34 weeks gestation, she was transferred back to the private hospital where she had booked and where I could continue her care. There continued to be close monitoring of her and of her baby. She was confined to bed with toilet privileges. On the evening when she was 35 weeks 0 days gestion a CTG (cardiotocogram) was done to check baby’s wellbeing. The CTG was abnormal. There was less baseline variability and the baseline foetal heart rate was slightly faster than normal. It very a very different CTG to the normal CTG that morning. She was afebrile (no fever).

Stephanie was transferred to the Birth Unit. Soon she became febrile. With a persisting abnormal CTG pattern and her being febrile I decided to deliver her baby by an emergency Caesarean section. That was safer than labour. As well Stephanie had asked me if she could have Caesarean section earlier in the pregnancy.

The operation was done under a spinal anaesthetic and was uncomplicated. Her son was born in good condition and had a birth weight of 2840gms, He was transferred to the special care baby unit for monitoring. He did not have any concerning problems.

To check for infection, swabs were taken of the baby and placenta at delivery. The swabs were negative for pathogens (infection).

Stephanie did well postnatally. She was discharged home before her son. Her son has also done well.

I have now seen Stephanie with her son for her six weeks postnatal visit. She and her thriving son are doing extremely well.

We discussed next pregnancy management. While there was significant interval between when the suture was removed and when she delivered, considering her history of a LLETZ procedure and two cone biopsies and how short the cervix was when I inserted the cervical suture we agreed a cervical suture would be a good idea next time. I advised Stephanie the possible reason she did not deliver soon after the suture was removed was because she has significant scar tissue in her cervix and so a ‘natural’ suture than resisted the cervix dilating. But this is no guarantee it would prevent a preterm delivery next time.

With a cervical suture in place there is risk of intrauterine infection. While she had been on prophylactic antibiotics a low-grade infection could have caused her to have preterm rupture on membranes. But this was never proven by swab results. As well, rupture of membranes before the onset of labour is relatively common and occurs when there was no cervical suture or infection concern. Even so, I had my suspicion about there being a low-grade infection in Stephanie’s case even they we could not prove. Her delivery was precipitated by an abnormal CTG consistent with infection and her becoming febrile was consistent with infection.

She achieved a good gestation of 35 weeks. I suspect this is more advanced that would have been the case without her having cervical suture. Without the cervical suture she may have delivered a very premature baby. As mentioned above an extremely premature baby is at risk of not only newborn death and but also of severe complications from extreme prematurity which can result in handicap and brain damage.