Your baby will prefer your music and your food! 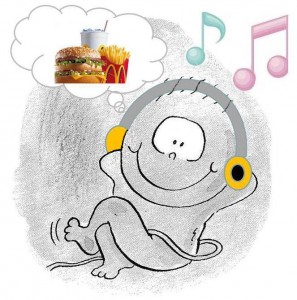 In the excellent video clip titled ‘Importance of the early years’ by Professor Glover of Imperial College London UK which I mentioned in my previous blog ‘Foundations of childhood behaviour’ Professor Glover also states “We now know that towards the end of pregnancy babies in the womb swallow the amniotic fluid, which in turn the chemistry of that is affected by what the woman eats. So there has been research showing that if women eat very spicy food the babies when they are born are more likely to the spicy smells they get; they learn to enjoy the food they are going to taste later. It is also known that they can learn to respond to particular music. Again at the end of pregnancy there is one study where women who listened to the soap opera Neighbours a lot, when the baby was born if the tune of the Neighbours was played the baby looked up and alert, and that they didn’t respond to other music in the same way. So there is evidence that – this is really at the end of pregnancy, the last six/eight weeks – babies do start to learn in a way that will prepare them for what they are going to respond to in the world outside.”

Having managed many thousands of women in pregnancy, I personally made similar observations about the impact music on the unborn child. If the pregnant woman was for instance an opera singer then it was opera music that her baby would find most appealing and if she was in a chamber orchestra then classical music was found to be the most calming for her baby. If she on the other hand she was often listening to popular music then it was music by her favourite bands or artists that would be soothing to her baby.

The food idea is interesting and not surprising. It helps understand why children are often partial to the same food styles as their parents. An applications of this are multiple:

It is truly amazing what can have an impact on a newborn baby. I have often read what happens in the first years of life is so important in determining how someone turns out as adults. I suspect these foundations start to be laid before someone is born and that a pregnant woman’s mental state, behaviour, food and music tastes, and more can have an impact on how well adjusted her baby is, tastes and preferences and life attitudes.