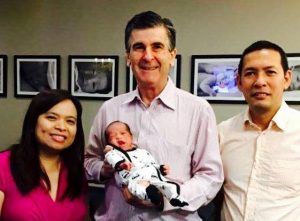 This is an amazing and wonderful story of a fabulous couple who after 15 years of trying to have to baby and despite a very challenging high-risk pregnancy because of severe preeclampsia have been blessed with was a beautiful baby boy.

Irene and her husband married in 2001. She was 30 years old. They started trying to have a baby soon after they married. When this did not happen they made an appointment with a fertility specialist. They were living in Singapore at the time. There was no success in having a baby while under his care.

Three years later (2004) they returned home to the Philippines to live. They saw three different fertility specialists over the next three years but still no success.

In 2007, they migrated to Australia. In 2008 they saw a fertility specialist in Sydney. Irene was now 37 years old.  IVF was suggested and attempted but this did not result in a successful pregnancy. Irene said: “None of the fertilised embryos survived past one day. We were heartbroken. We decided to rest from actively trying to conceive.”

In 2014, after a career change for Irene, her husband convinced her to try IVF again and to stop work to give it a full chance to succeed.  They tried IVF again in 2015 and at 44 years old, Irene was pregnant for the first time!!

I met Irene and her husband at her first antenatal appointment with me was when she was nine weeks pregnant. They were very excited. Her pregnancy was uneventful until 28 weeks.

The routine 28-week pregnancy screening test for diabetes had an abnormal result. Fortunately, management of her gestational diabetes with diet change alone was sufficient.

At 32 weeks pregnancy Irene developed preeclampsia. She needed to be hospitalised because of this. Irene was monitored with regular nursing ward observations including blood pressure and urine checking,  and regular preeclampsia blood tests. Her baby’s well being was monitored with heart rate (CTG) monitoring and ultrasound scan. The baby was smaller than usual size (probably because of the preeclampsia) but remained well. Irene gradually required increasing dosage and number of antihypertensive medications to keep her blood pressure under control.  At the end of her pregnancy, she needed to take in a day three different antihypertensive medications (hydralazine, labetalol and nifedipine) to keep her blood pressure under control.

What prompted my decision for her delivery was impaired renal function. When both her urea and creatinine were both abnormally elevated I advised Irene that I should deliver her baby as I was worried she would be at risk of renal damage if the pregnancy continued.

She had an emergency Caesarean section delivery when she was 36 weeks gestation. It was done under a spinal anaesthetic and was uncomplicated. Her son Andre was breech in presentation and so I did a breech extraction delivery. Andre had a birth weight of 2295 grams.

Postnatally there were no issues. Mother and son both have done well and both have been discharged home with Irene is successfully breastfeeding Andre. At the time of discharge, a lower dose of antihypertensive medications was needed to control her blood pressure. I have been reviewing her in my office and I am hopeful I will be able to cease her antihypertensive medications soon.