Aches and Pains in Pregnancy 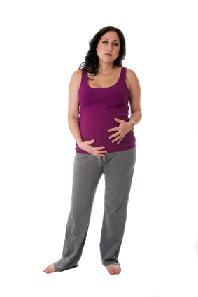 I feel so heavy!

Pelvic heaviness can be apparent in the first trimester of pregnancy. This is due to increased blood flow to the pelvis and an increase in uterine size because of your pregnancy. It is also due

stretching of the uterus supporting ligaments. Because of this heaviness is usually worse in pregnancies subsequent to the first ongoing pregnancy.

As the uterus enlarges there can be pain from tension on the round ligaments at either side of the uterus. We call this ‘ligamentous’ pain.

Towards the end of the pregnancy, the large size of the uterus can cause considerable abdominal discomfort. This is more so if you have had a baby before as your ligaments aren’t as firm second time. Because of this the increased awareness of heaviness is most marked between the first and second ongoing pregnancy and less after the second.

Subsequent pregnancies tend to have similar discomfort to the second ongoing pregnancy. The heaviness is often  described as “It feels like it is going to fall out!”

As well when baby’s head engages in the pelvis there can be a very uncomfortable feeling of considerable pelvic fullness which has even been described as like having a “watermelon between your legs”.