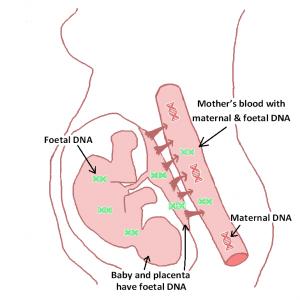 This is a new non-invasive way of checking your baby’s chromosomes and so excluding the most common chromosome disorders with a very degree of accuracy, the Non-Invasive Prenatal Test (NIPT).

Amongst my patients, the Non-Invasive Prenatal Test (NIPT) is now far more popular than the Nuchal Translucency Scan (NTS) and serum as a screening test for foetal chromosome disorders.

The NTS looks at the skin fold on the back of the baby’s neck at about 12 weeks. This has been further refined by looking at the nose bone of the baby. In addition, there is a checking of the levels of two pregnancy hormones to increase accuracy. This is the combined test (ultrasound scan and serum) has a considered predictive value of about 92%. In contrast, the NIPT has >99.9% accuracy in checking for the three commonest chromosome disorders and as well can check for sex chromosome disorders and so the sex of your baby.

Sonic Genetics report a low-risk result as <1 in 10,000 risk of the checked chromosome having an abnormality. Checking for sex chromosome disorders and the sex of your baby is not possible with the NTS.

What is Non-Invasive Prenatal Testing?

Chromosomal abnormalities (such as Down syndrome) are abnormalities of the baby’s DNA (which is the ‘blueprint” of the human body).

DNA originating from placental microparticles of the trophoblast of the placenta is shed into the mother’s bloodstream from as early as four weeks pregnant. This placental DNA is called cell free DNA (cfDNA) and is almost always the same as baby’s DNA. The amount of cfDNA increases as the pregnancy progresses. CfDNA diminishes quickly after the birth of the baby so that it is no longer detectable in the maternal blood approximately two hours after birth. CfDNA is significantly smaller in size than the maternal DNA in the bloodstream. NIPTing uses the smaller size of cfDNA to distinguish it and extract it from the maternal DNA.

A blood sample taken from the pregnant mother at any time in the pregnancy from approximately 10 weeks on usually has enough of her baby’s placental DNA that can be checked for the commonest chromosomal disorders. Sonic Genetics reports the percentage CfDNA in the specimen of maternal blood. The higher the percentage the more accurate the result.

The result of the simple blood test is predictive to more than 99.9% for Down Syndrome (Trisomy 21).

Who does the NIPT screening?

With NTPT screening growing in popularity the cost has come down and there are now more options where you can go to get the testing done. Testing can now be done in Australia by Douglass Hanly Moir’s genetic testing facility called Sonic Genetics and by Genea IVF. Sonic Genetics uses Ariosa Diagnostics (USA laboratory) analysis kit locally under licence.

I was referring to another company until Sonic Genetics started doing the testing locally. My preference is now for blood collection to be done by Douglass Hanly Moir (DHM) and analysis to be done by Sonic Genetics. Analysis is done in Australia using the Harmony kit (under licence) which is owned by the American Lab Ariosa Diagnostics.

I have used DHM for pathology ever since I have been in private practice. I have always found DHM to be a high-quality laboratory that wants the greatest accuracy possible with reporting. They are also very efficient and are very easy to work with, discuss results with when needed, etc. DHM in the past was offering the NIPT service with overseas analysis and at a higher cost so I was using another company which uses another American laboratory kit locally under licence.

When DHM’s genetic testing facility Sonic Genetics negotiated successfully with Ariosa Diagnostics and so could offer the Harmony test with blood analysis done in Australia and at a reduced price I have been referring patients to DHM/Sonic Genetics. An example of Sonic Genetics’ focus on accuracy is they report in your result the percentage of cell-free placental DNA (CfDNA) in the maternal blood specimen. The higher the percentage the greater the confidence in the accuracy of the report. This may have been checked but was not reported by the previous company I had been using. For the purpose of increasing accuracy in reporting Sonic Genetics to ask the referring doctor to provide extra information on the referral – your weight, height, weeks pregnancy, singleton/twins, IVF/no IVF and if IVF whether donor egg.

More NIPT information is shown in the table below. 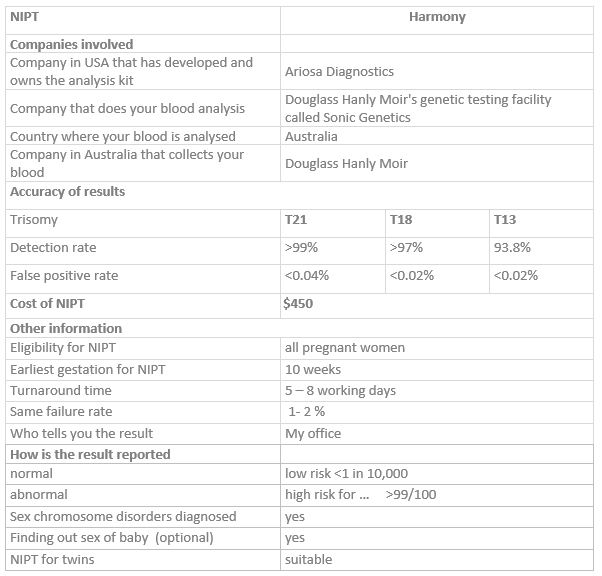 What is the cost of the NIPT screening test?

Who has NIPT screening?

I offer the screening test option to all my patients.

A pregnant woman attending a public hospital as a public patient is unlikely to be offered NIPT screening at the antenatal clinic. I suspect this is because of financial considerations, as there is no Medicare rebate on the test.

So I still need a 12-week ultrasound scan?

An NIPT is much more accurate than an NTS in checking for chromosomal abnormalities. You don’t need both. An NTS, in addition, will not increase the accuracy of detection of Trisomy 21, 13 or 18.

The companies that do the NTS will encourage you to have an NTS type scan also. They will say it is to check for and detect developmental abnormalities sooner and to assess whether you are at higher risk of early-onset preeclampsia.

A 12-week ultrasound scan will help predict your likelihood of developing preeclampsia in your pregnancy and if you are found to be at ‘high risk’ severe early-onset pre-eclampsia can be prevented by taking low-dose aspirin throughout your pregnancy. In the report ‘Early Administration of Low-Dose Aspirin for the Prevention of Severe and Mild Preeclampsia: A Systematic Review and Meta-Analysis’ Stéphanie Roberge, Yves Giguère, Pia Villa, Kypros Nicolaides, Merja Vainio, Jean-Claude Forest, Peter von Dadelzen, Daniel Vaiman, Sylvie Tapp, Emmanuel Bujold, Am J Perinatol 2012;29:551–556. it is stated low-dose aspirin started before 16 weeks pregnancy can prevent severe early onset preeclampsia. It also is concluded that “definitive trials are required to determine whether low-dose aspirin can prevent the adverse maternal and perinatal consequences of severe preeclampsia in high-risk women who may be identified through predictive screening programs”.

While the exciting recent developments of looking at various biophysical and biochemical markers and maternal risk factors in determining the likelihood of developing preeclampsia is very promising, it is generally concluded further evaluation is needed. For the present, these new approaches are not endorsed as routine screening procedures by the Colleges that train and register obstetricians in Australia and New Zealand (RANZCOG), in the United Kingdom (RCOG) or in the USA (ACOG).

Checking for your maternal risk factors for preeclampsia is a normal part of your antenatal care. There are situations when low-dose aspirin is indicated.

I certainly have no objections to you having a 12-week ultrasound scan, but whether you have this done is your personal decision. It will cost you more money.

Are there problems the NIPT test will not detect?

What are the limitations of the NIPT?