Baby had no heart beat at birth 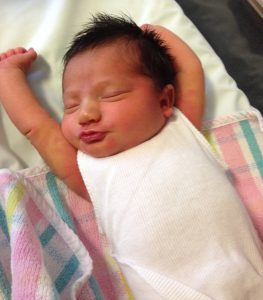 It was Lydia’s first pregnancy. It had been totally uncomplicated. I saw her at 39 weeks and 0 days for a routine check and there were no concerns.

During the early evening of the next day Lydia fainted at home whilst sitting on the couch. Her mother-in-law was with her. She was otherwise well. She was in no pain and had no vaginal bleeding. Even so, because she had fainted, her husband Igor took her to the hospital for a check.

Soon after Lydia arrived in the Birth Unit she ruptured her membranes spontaneously. The foetal monitor was put on her abdomen. There was a very abnormal foetal heart rate pattern. The midwife who phoned me at home described the foetal heart rate pattern to me as being ‘preterminal’. That meant if we did not deliver the baby very soon it would die in the womb. I arranged an urgent Caesarean section and went to the hospital as quickly as possible. The operation was done under a general anaesthetist because there was no time to give Lydia a spinal block.

The baby was delivered very quickly. The baby had no heartbeat detected when checked on the neonatal resuscitation in the operating theatre immediately after delivery.

The baby was intubated and given expert cardiopulmonary resuscitation (CPR) The heart started beating, the colour of the baby improved and soon the baby was moving and then crying. What a relief! The baby was admitted to the Special Care nursery for monitoring. There were no further concerns.

Umbilical artery and vein blood were collected for analysis at delivery. The results were consistent with the baby having experienced a severe but brief episode of lack of oxygen (called ‘asphyxia’). Because of Lydia’s husband bringing Lydia to hospital so promptly, the quick delivery and excellent newborn resuscitation by the medical and nursing staff, the baby has done well. There is no reason to suspect the baby will have any long-term problems. The baby was a girl with a birth weight of 3385 grams.

When Lydia was moved from the trolley onto the operating table so I could do the Caesarean section I noted that the amniotic fluid draining was clear in colour. There was no blood. When I catheterised Lydia before starting the operation I was very surprised as there was considerable blood in her urine. That was an unusual and concerning finding. My thought was there may have been either a uterine rupture or Lydia had a bleeding disorder. There was no reason to suspect a uterine rupture as Lydia had had no previous uterine surgery, had no pain and was not in labour. There was no evidence of uterine rupture at surgery. A bleeding disorder was a more likely problem as there was also considerable extra bleeding of the abdominal wall layers with incision. Closure was difficult because of considerable bleeding of the uterus and the abdominal wall layers. That was consistent with a bleeding disorder. Extra sutures and diathermy and extra time and patience were needed to stop the bleeding. I inserted a large drain into the abdominal (‘peritoneal’) cavity because I wasn’t confident there would be no further bleeding. 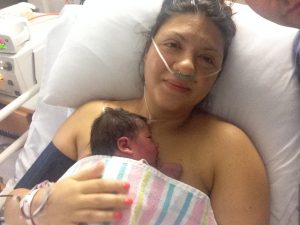 Blood tests were done after delivery, Results indicated that Lydia had developed HELLP syndrome. HELLP Syndrome is reported to occur 0.5 to 0.9% of all pregnancies*. HELLP syndrome is considered to be the most serious type of preeclampsia. It is associated with an increased incidence of maternal death (reported incidence up to 25% of cases*) and maternal morbidity (ongoing consequential health problems) and ‘perinatal’ (period immediately before and after birth) death (reported incidence 8% after the 32nd gestational week*) and newborn morbidity. HELLP is an acronym where the letters indicate the principal pathology conditions. H is for Haemolysis or red blood cell breakdown resulting in a ‘haemolytic’ anaemia, EL is for Elevated Liver enzymes (indicating liver damage); and LP is for Low Platelets in the blood, also called ‘thrombocytopenia’, leading to a bleeding tendency. Lydia had haemolysis, elevated liver enzymes, impaired renal function, and a modest decrease in her platelet count. Lydia also had abnormal blood clotting consistent with a ‘disseminated intravascular coagulopathy’ (DIC). The haemolysis and liver damage in HELLP syndrome each predisposes to DIC. A DIC happens in about 38% of patients with HELLP syndrome*.

Because of this diagnosis, Lydia was managed for a few days in the Intensive Care Unit. She was given blood product as her haemoglobin had decreased to 59g/dl (normal 115 – 165). Blood loss was more than usual with delivery and postoperative in the drain but her blood loss was not enough to account for that degree of anaemia. Haemolysis due to HELLP syndrome rather than blood loss was the main cause for her anaemia. Blood testing indicated that was significant haemolysis of the red cells in her blood.  Her haemoglobin was 121g/dl just prior to surgery, indicating there was no anaemia when she was admitted to Birth Unit.

Except for a blood pressure reading of 150/90 on admission to Birth Unit there was no evidence of hypertension antenatally, during the operation or postnatally. The majority of women with the HELLP syndrome have hypertension and proteinuria but it may be absent in 10 – 20% of the cases*.

This was a very dangerous time for both mother and baby. It was also very challenging presentation. Fainting in pregnancy is not uncommon is usually due to ‘postural hypotension’ or an episode of not getting enough blood to the brain. I suspect in this case that the onset of HELLP syndrome had altered blood flow resulting in a brief episode of reduced blood flow to the brain and so fainting.

Lydia had otherwise been well that day. She said she was aware of the baby moving but as she was busy that day and had not taken much notice. She had not had any pain or bleeding. So there was no reason to suspect anything was amiss when she arrived in Birth Unit. Lydia did not have any of the classic symptoms of HELLP syndrome.

I suspect the severe foetal distress was due to disruption of oxygenation to the baby and was a consequence of HELLP syndrome. There was no evidence that a placental abruption (the placenta separates from the uterus predelivery of the baby) had been the cause of the foetal distress. Another possibility for foetal distress was umbilical cord compression but the foetal heart rate pattern was not typical of this and there was no evidence of this at delivery. The excellent quick recovery of the baby and the cord blood results suggest the lack of oxygen episode had occurred only a short time before delivery. 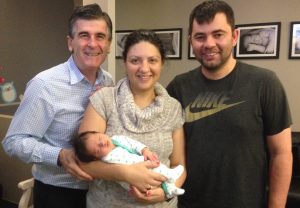 I am confident that was the reason for the blood in the urine noted at the start of the operation and the extra difficulty with stopped her bleeding with closure after delivery of the baby was because of the DIC bleeding disorder with HELLP syndrome.

Because of Lydia’s husband’s prompt action in bringing her to hospital and the speedy excellent management of all the medical and nursing staff at Norwest Private Hospital involved in Lydia and her baby’s care, Lydia and her daughter have made an excellent complete recovery.