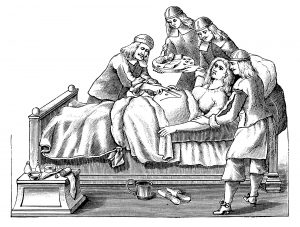 There are references to Caesarean section operations in ancient Hindu, Egyptian, Greek, Roman, Chinese and European stories, photos and ancient historical records. While it is commonly believed the name ‘Caesarean’ is from the surgical birth of Julius Caesar, this is considered unlikely as his mother lived to hear of her son’s invasion of Britain. Roman law under Caesar decreed that only if the mother-to-be was dead or dying then she was to be cut open to deliver the infant. This decree is the more likely origin of the name.

Over the centuries the operation was done to deliver the infant from a dead or dying mother in the hope of saving the baby’s life, or because of a religious ruling so the infant must be buried separately from the mother. Until the 19th-century Caesarean section operations were not intended to preserve the mother’s life. There are only sporadic reports of where the operation was done to also save a pregnant woman’s life.

In the late 1800’s there were reports of Caesarean section deliveries to save the mother and baby’s lives in Africa, Europe, the United States and England. With increased urbanization, the growth of hospitals and the introduction of anaesthetic agents the operation began to be performed more often. With increasing attention to aseptic techniques, with increasing knowledge of the female anatomy it gradually became accepted that a Caesarean section delivery was safer than a difficult risky operative vaginal delivery when there was an obstructed labour.

In late 1800s obstetricians started doing transverse incisions in the lower segment of the uterus in preference to the classical uterine incision (vertical incision in the anterior wall of the uterus). This changed access to the uterine cavity reduced the risk of infection and of uterine rupture in subsequent pregnancy.

Penicillin was discovered by Alexander Fleming in 1928 and in the 1940s became generally available. Its use dramatically reduced maternal mortality for both normal deliveries and Caesarean section deliveries.

Since World War 2, the trend toward medically managed pregnancy and childbirth has steadily increased. New maternity hospitals were being built. By 1938, approximately half of U.S. births were taking place in hospitals. By 1955, this had risen to ninety-nine per cent.

Caesarean sections were done only for a limited number of indications. These included concern about cephalo-pelvic disproportion (baby’s head is too big for the maternal pelvis), obstructed labour (consequence of cephalo-pelvic disproportion), a failed attempt at a vaginal forceps delivery, preterm delivery for conditions such as severe preeclampsia when the cervix was unfavourable for induction of labour, placenta praevia, transverse lie of baby, foetal distress before labour or in first stage labour.  Foetal monitoring began to be introduced in the 1970s. With that, it was possible to more accurately diagnose foetal distress (heart rate conges suggesting a lack of oxygen in the baby). Repeat Caesarean sections were only done if the indication for the first Caesarean section was relevant for the second delivery (such as cephalopelvic disproportion), the first had been a classical Caesarean section, there had been uterine surgery such as a myomectomy (fibroid removal). These circumstances were associated with an increased likelihood of uterine rupture in labour. Overall that meant the incidence of Caesarean sections was less than 10% of all deliveries.

Where possible delivery was vaginal. Most breech and twin deliveries were vaginal. Mid-cavity and rotational forceps deliveries were popular when there was a lack of progress of foetal distress in second stage labour. There were more challenging operative vaginal deliveries which were potentially dangerous for mother and baby. A Caesarean section was done if in second stage labour it was not possible to deliver the baby with forceps.

There has been a gradual increase in the incidence of Caesarean sections in many countries in the world. There are still some poor countries with a very low rate or no Caesarean sections, with a consequential adverse impact on mother and baby mortality and morbidity. In contrast, there has been an increase in incidence in some of the world’s poorest countries has had a huge positive impact on mother and baby mortality and morbidity. I am a Director of Hamlin Fistula Australia, a charity whose function is to support Dr Catherine Hamlin and her team in eradicating obstetric fistulae (abnormal channel that forms between the bladder or rectum or both and vagina because of obstructed labour) in Ethiopia. Early detection of obstructed labour and Caesarean section delivery when this occurs is not only reducing maternal and foetal mortality rates but also has helped to significantly reduce the incidence of obstetric fistulae in Ethiopia.

There has been a pushback from some who have suggested that a Caesarean section delivery can have a detrimental impact on the mother and baby’s long-term health. There are undeniable risks of major surgery. These risks are now far less than in the past. These are greater risks if the operation is done by an inexperienced or poorly trained surgeon. There is a consequently uterine scar which increases the risk of uterine rupture especially in labour with subsequent pregnancies. Views that a Caesarean section delivery can have other long-term detrimental health impacts for mother and baby are not widely held and lack support in medical literature.

There is a push back in NSW by the State Government with a policy called ‘Towards normal birth’ which has the stated aim ‘To increase the vaginal birth rate in NSW and decrease the caesarean section (CS) operation rate’. The Government fails to mention in promoting this policy it is cheaper for the hospital and Government if there were fewer Caesarean section deliveries done on public patients and so I suspect a significant motivation of this policy is the financing saving.