An episiotomy that went wrong 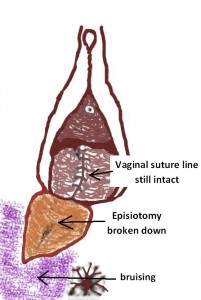 I recently saw a new patient eight days after her confinement.

She had been managed in her recent and first pregnancy as a public patient in a local large teaching hospital through its midwives clinic.

She wanted a water birth. Thirteen days overdue her labour was induced. She said first stage labour went well. The midwife looking after her was concerned about the slowing of the baby’s heart rate in second stage labour. She advised her to get out of the water and up onto the delivery bed. The midwife then proceeded to do an episiotomy to facilitate delivery of her baby. She had a healthy girl weighing 3.408Kg

The same midwife then sutured the episiotomy. There was no doctor present.

The patient advised me that the episiotomy wound remained very painful. She said on the seventh postpartum day she felt what she called a ‘rip’ in the episiotomy area. She attended the Accident and Emergency Department of the same hospital where a resident doctor examined her and said there had been dehiscence the episiotomy wound. What this means is the sutures had not held the edges of the episiotomy cut together. The episiotomy wound had opened up and subcutaneous tissues were exposed to the surface. The resident doctor said nothing could be done except salt baths and taking prophylactic antibiotics. He said over weeks it would gradually heal, but it may not heal well. He said there could be ongoing discomfort including with sexual intercourse. Not only was she very upset about what had happened and what the resident doctor said but also she was in considerable pain and couldn’t sit down.

She was chatting to her friend who very had recently been delivered by me. Her friend suggested she see me for a second opinion.

When she entered my consultation room she insisted on standing as sitting was too painful. On examination, I noted a large right mediolateral episiotomy had been cut. It was obvious there had been dehiscence of the episiotomy wound. The skin edges were apart up to 4.5cm. The split extended from the vaginal introitus to where the episiotomy ended antero-lateral to the anus. As well there was a very large bruise involving the posterior adjacent area and extending onto the inferior aspect of her right buttock.

She enquired about the episiotomy being resutured. After careful discussion of the pros and cons I agreed. I cleaned the wound and injected adequate local anaesthetic. I then recleaned, removed exposed suture material and closed the wound with interrupted 2/0 Vicryl sutures in two layers.

She was able to sit on the chair in my consultation room after the resuturing procedure. She commented on how much more comfortable she felt. She was very happy. I gave her a higher dose of antibiotics to take and analgesic advice. I encouraged her to continue with salt baths, but otherwise keep the area dry.

I saw her again one week later. She was comfortable and was able to sit normally. On examination, the wound looked good and the edges had held together except for one very small area about 1 cm long. I cleaned that area, injected a local anaesthetic and applied Silver Nitrate. The bruising was less. I encouraged her to continue antibiotics for another week, but there was no need for further salt baths

I phoned her today. She was very happy and the wound was healing very well. She said she was feeling much more comfortable and was very pleased with my care.

She said she had learned her lesson. Next time she would want to be going public but will be managed by me as a private obstetric patient.

There are a number of considerations in this case: