Baby’s hand below head in labour 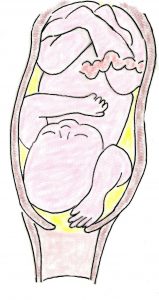 Towards the end of her third pregnancy, a patient asked me if her labour could be induced. She had requested the same in the previous two pregnancies. In her first pregnancy delivery took place at 39 weeks gestation and in the second at 38 weeks gestation. All worked out well with normal deliveries of healthy girls.

I assessed her cervix at 37 weeks gestation. Her cervix was already 3cm dilated and the baby’s head was engaged and well applied to the cervix. I advised her that an induction should be straightforward and she could anticipate a good labour and delivery, as had been the case previously. This proved not to be the case this time.

The patient was almost 39 week’s gestation when she was admitted for an ARM and Syntocinon infusion induction of labour.

Progress in labour was slower than I anticipated. I was phoned by the midwife. The midwife said she estimated her cervix was 5cm dilated. She also said there was a compound presentation apparent, with the baby’s hand being below the head. She said the contractions were in-coordinate. That would explain the slower progress in labour. The contractions would not be optimal because the baby’s head was not well applied to the cervix, with the baby’s hand between the head and cervix.

The midwife tried to push the hand out of the way so the head could be better applied to the cervix but wasn’t able to do so.

I attended. The patient’s cervix was now 8cm dilated. I could easily touch the baby’s fingers when I examined her. The baby’s hand was below the baby’s head.

Between contractions, I was able to push the baby’s hand up and out the way. Fortunately, the baby decided to cooperate and keep its hand away and so the baby’s head was now better applied to the cervix.  The patient had an epidural for the labour so my examination to push the hand away was not uncomfortable to her.

The contractions became more coordinated and efficient with the baby’s head now well applied to the cervix.  Soon the patient’s cervix was fully dilated. She went on to have a normal vaginal delivery with a very small perineal tear. Her son was born in good condition and had a birth weight of 3.6kg.