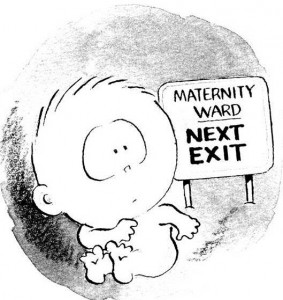 A new patient saw me this week to talk through her last childbirth experience. She also wanted to discuss having another baby.

She had been managed as public patient in her last pregnancy. It was her first pregnancy. There were no pregnancy problems except for elevated blood pressure in the last weeks.

She presented to hospital in active labour at 40-weeks’ gestation. An internal examination was done by the midwife. She was told her cervix was five centimetres dilated.

She was not coping with the pain of labour and so requested an epidural. This request was denied by the midwifery staff. She said no explanation for this denial was given. She was very upset.

The hospital resident medical staff then decided that an operative vaginal delivery was needed. She was taken to the operating theatre for this. She said to me she it was a very frightening experience. In the operating theatre, she was given a regional anaesthetic for the forceps delivery. She said to me in a frustrated tone: “They were happy to give it to me then, but would not let me have it earlier when I requested it.”

She had a forceps delivery with an episiotomy. The episiotomy extended and she he had a third-degree perineal tear as well as the episiotomy.

She said her baby boy was born in good condition except for marked bruising of his scalp (cephalhaematoma). He had a birth weight of 3712 gm.

She told me she had an uncomfortable recovery because of perineal pain from all the stitches. She said it took six months for her to be able to sit down normally.

She said she felt abused and violated by the labour and delivery experience. She talked about the lack of communication and explanation, and wondered whether those looking after her knew what they were doing. She said her husband was so upset he wanted to punch someone.

She asked the hospital staff repeatedly for more explanation of the delivery. This information was not forthcoming. She then asked her general practitioner who was not able to give her the information she needed.

From the information she provided, and drawing from my considerable experience as an obstetrician and using lots of diagrams as visual aids, I was able to answer her questions and give her a much more complete understanding of what had happened in her first labour and delivery and why it had happened. She was very grateful to finally get her questions answered.

We then went on to plan management of her next delivery. I discussed in detail the pros and cons/risks and benefits of a vaginal birth versus a Caesarean section.

I advised her, in contrast to what had happened last time when she did not have personalised care or a relationship with those looking after her, I would be the person she saw throughout the pregnancy (in my office) and I would be the person who delivered her baby. I was the person she would contact with any concerns in the pregnancy. I said she could message me with any questions through Facebook, etc. I mentioned about having free 4D ultrasound scanning of her baby at each antenatal visit. Features of the care we provide our pregnant patients are summarised on our website on the page ‘Highlights of our care of you and your baby ‘

She said she was inclined to have Caesarean section next time. I told her I was not surprised with her choice. I said: “That delivery has scarred you not only physically but also emotionally and to not have to worry about a vaginal birth will give you more confidence in planning pregnancy and in pregnancy.” I told her I have had other patients with similar past delivery histories when they were not my patient who have chosen the Caesarean section option and have been extremely happy with how everything went. I mentioned about another patient who was being discharged home the next day after an elective Caesarean section. That patient had told me with her first delivery she had also had three hours of pushing before a very traumatic vaginal birth and being unable to sit properly for six months after. This time the delivery and postnatal period were very uneventful. She was being discharged home feeling well and taking minimal analgesia. She told me she was so happy with her decision to have an elective Caesarean section and with me being her obstetrician.

With consideration of how emotionally traumatising the birth experience was for her, her choice of an elective Caesarean section for next time is very sensible. As well, I am concerned whether an easy vaginal birth is possible for her. To not deliver after three hours of pushing and then to have what sounds like a difficult forceps delivery of a normal sized baby suggests the size of her pelvis may be reduced in size. As well, there is the consideration of the third-degree tear. As she has considerable scar tissue in the perineum area and scar tissue doesn’t stretch as well as unscarred tissue, there is increased risk of perineal trauma with another vaginal birth. If she chose to have a vaginal delivery next time then there would need to be careful assessment of pelvic size and shape and consideration of extra measures that could be taken to optimise her chances of all going well.