Management of an occipito-posterior positioned baby 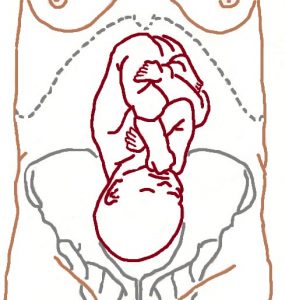 It was Shannon’s third pregnancy. Her first was in 2015. That pregnancy had been uneventful. She ruptured her membranes at 40 weeks. As she did not go into labour a Syntocinon infusion was commenced. She had a vaginal delivery of a healthy girl weighing 3.1Kg. Her perineum was intact. I needed to give her a hand with delivery using the Mityvac suction cup. She then had a miscarriage and now this pregnancy.

This pregnancy progressed well. At 39 week and 5 days, her baby had an estimated weight by the ultrasound scan of 3.7Kg. The baby was in a right occipito-posterior position. Baby’s head was high and was 5/5ths palpable abdominally. Her cervix was long closed and not suitable for induction.

I suggested to her the problem was the occipito-posterior position of the baby. It meant the baby’s head was deflexed and so there was a larger diameter of the baby’s head presenting that if the baby was in an occipito-anterior position. As well this baby was larger than her first. I wanted delivery soon to optimise her chances of having an easier vaginal delivery, but the closed cervix implied a difficult and a possibly unsuccessful induction if we tried. It was safer to leave her and reassess the next week. I saw her the next week and her cervix was now 2cm dilated and long. It was more inducible than it had been the week before. The baby’s head was at station -3. The baby was still in an occipito-posterior position. I booked an induction of labour. 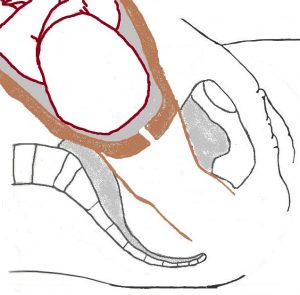 Shannon’s induction was booked for when she was 40 weeks and 2 days gestation. I planned for her to come into the Birth Unit the night before for Prostin gel ripening if the cervix. I was phoned by the midwife saying they were not happy to insert the Prostin gel as the baby’s head was so high. I attended and did an internal examination myself. The head of the baby was now higher than it had been when I examined her in my office. It was at the brim of the pelvis and not at all applied to the cervix. Her cervix was 2cm dilated and long. I agreed it was too dangerous to insert the Prostin gel. Rather, we could do a ‘stabilising’ induction the next morning, with a Syntocinon infusion first and later an ARM (artificial rupture of membranes) when she was contacting and the baby’s head lower.

Shannon had asked for an epidural in labour. I suggested she have an epidural administered before a Syntocinon infusion was started. I was confident the uterine contractions would push the baby’s head into the pelvis and so make it safer to do an ARM. At 8.30am the epidural was administered. At 8.50am the Syntocinon infusion was begun. At 10.40am, with her contacting well, she had an ARM. Now baby’s head was in the upper pelvis at station -3 and was better applied to the cervix. The cervix was still 2cm dilated and was 2cm long. 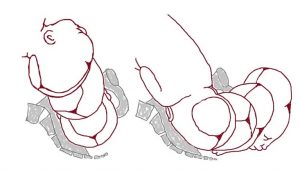 At 7.30pm her cervix was 10cm dilated. Now the baby’s head was at station 0 (the level of the ischial spines or midway down the pelvis). Because baby’s head was still relatively high and she lacked sensation with the epidural block and with baby’s well being was being good, pushing was deferred until 20.00hrs. She pushed very well. There was an internal rotation of baby’s head from a right occipito-posterior to direct occipito-anterior position as it descended through the birth canal. Shannon had a normal vaginal delivery with an intact perineum. He son was born in excellent condition and had a birth weight of 3.8Kg. He was bigger than his older sister who had a birth weight of 3.1Kg.

With good management, we could overcome the challenges that resulted from an occipito-posterior position of the baby and have an excellent outcome with least intervention necessary. Had there been no induction and her pregnancy continued longer it is highly likely there would have been more intervention and potentially her and her baby wellbeing could consequentially have been compromised.