Time was of the essence

It was Monday morning. Amie’s husband Mitch had gone to work. Amie woke at 7am and “spent the morning lying in bed practising my calm birth breathing from the calm birth course we did two weeks earlier”.

Amie was 33 weeks pregnant in her first pregnancy. Her pregnancy had been uneventful until that Monday morning.

She had been under the care of a hepatologist (liver specialist) because she had been diagnosed in early 2012 as having focal nodular hyperplasia (FNH) of the liver. FNH is the second most common benign liver tumour and is reported to occur in up to 3% of the population. FNH is considered to be a localised hepatocyte (liver cell) response to an underlying congenital liver blood vessel malformation. It usually remains stable or decreases in size over time. Haemorrhage rarely occurs. FNH is not hormonally related and oral contraceptive use and pregnancy are not a concern in women with FNH of the liver.

Amie was monitored with both ultrasound scan and special MRI (with Primovist liver specific contrast) scans and had been reassured.

She said: “at 10am I started to have trouble breathing and my ribs started to hurt. Then my stomach started to cramp all over. I was shaking and felt really faint. “

Amie and her husband lived adjacent to Amie’s parents. It was soon realised by Amie’s mum this was a serious problem. “Dad picked us up and Mitch came home from work. We all left in one car to go to the hospital. Dad drove like an ambulance to get me there – flashing headlights, hazard lights and beeping like crazy to try to tell other cars that we were in a hurry. He even pulled over to an RBT and asked the police for a police escort to get us there quickly. Unfortunately, they declined and so Dad did everything that he could to get me there as quickly as possible.”

They arrived at A&E and were then taken quickly by hospital staff to the Birth Unit. The midwife put the baby monitor on Amie’s abdomen and the baby’s rate was found to be very slow at only 70bpm without recovery (normal range is 120 to160 bpm). Amie’s blood pressure was low, her pulse was elevated. She had difficulty breathing, was feeling very faint and said she had upper abdominal pain. Amie reports: “After that I remember at least 20 people running into the room, putting oxygen masks on me and then I was rushed to theatre. I don’t remember anything after that.”

It was likely that Amie had internal bleeding that was putting her life and her baby’s life at huge risk. Time was of the essence. There could be no delay if Amie’s baby’s life and her life were going to be saved. Resuscitation of Amie was commenced and an extremely urgent Caesarean section was arranged.

It was so urgent that there was no time to even register Amie’s admission in the hospital system. The anaesthetist cut Amie’s clothes from her after starting her general anaesthetic, as there was no time for her to change into a theatre gown. Emergency resuscitation measures were started while there was blood cross-matching.

I was consulting in my office when I had a call from a midwife in the Birth Unit stating Amie was there and they were arranging a Category 1 (very urgent) Caesarean section as there was very severe foetal distress. I left the patient I was seeing in my office immediately and I went as quickly as possible straight to the hospital.

Fortunately an obstetrician colleague and my regular anaesthetist were in the operating theatre tea room between cases when the Category 1 Caesarean section call came into theatre. They attended to Amie while I was in transit. There was no delay in arranging an operating theatre and excellent staff – both medical and nursing. I arrived in theatre just after the general anaesthetic had been commenced. My colleague and I did the Caesarean section together, which was so opportune considering the gravity of the situation.

After cutting through the abdominal wall layers and opening of the peritoneal cavity a considerable amount of fresh blood was released. There was extra-uterine bleeding, which was unexpected. The uterus was opened and an urgent Caesarean section delivery was performed.

Her baby (called Ryder) was quickly delivered and given appropriate resuscitation by the paediatrician present. Ryder at birth was pale, floppy, not breathing and had a very slow heart rate. With appropriate resuscitation by the paediatrician the baby made a speedy recovery. Ryder’s Apgar scores were 2 (at 1 minute), 5 (at 5 minutes) and 8 (at 10 minutes). Umbilical cord blood was collected at delivery for checking Ryder’s biochemical condition at birth. Ryder had very abnormal umbilical cord blood results. The pH of his umbilical artery blood was 6.813 (normal range 7.1 – 7.38) and the pH of his umbilical vein blood was 6.855 (normal range 7.2 to 7.44). The other umbilical cord blood measurements were also abnormal consistent with severe birth asphyxia with a combined respiratory and metabolic acidosis. Fortunately Ryder has made an excellent recovery and has no evidence of any damage due to lack of oxygen.

After delivery of the baby, the uterus was checked for any evidence of uterine rupture, the most likely obstetric explanation for extra-uterine bleeding. That was not the case. The uterus was closed. With the baby delivered and uterus closed attention was then given to finding the site of the bleeding.

There was a considerable amount of blood clot higher in the abdominal cavity. With consideration of this, with Amie’s history of FNH of the liver and that she had upper abdominal pain, a liver reason for the intraperitoneal haemorrhage was considered likely. 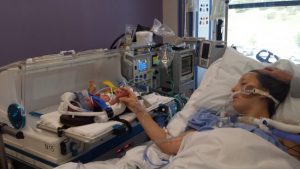 A bowel surgeon colleague was able to attend immediately. He did a vertical upper abdomen incision to access the upper abdomen and liver area. We assisted. He found a large liver tumour involving the left lobe of Amie’s liver. There was a vessel on the surface of the tumour that was actively bleeding. The bleeding vessel was oversewn by the surgeon and haemostasis was achieved. There was no further bleeding. As much blood as possible was removed from the peritoneal cavity, a peritoneal cavity drain was inserted and Amie’s abdomen was closed. The measured blood loss was 3 litres. Amie was given three bags of fresh frozen plasma and four bags of packed cells by the anaesthetist and was subsequently clinically stable.

After the operation Amie was transferred to the Intensive Care Unit for recovery.

Ryder, who was now stable and in good condition, was transferred to the closest hospital with Neonatal Intensive Care Unit cot available. As there were no subsequent concerns he was soon transferred back to the hospital where mum was recovering.

Amie’s condition continued to improve. A hepatobiliary surgeon was consulted while Amie was in the Intensive Care Unit.

It was planned to wait a significant interval to operate on Amie’s liver. On the day before Amie was scheduled to be discharged home, Amie became febrile with rigours and had suddenly markedly abnormal liver enzyme levels. It became apparent this was not an infection problem but rather liver tumour changes. So the hepatobiliary surgeon took Amie to theatre where he removed a large tumour from her left liver lobe and a smaller tumour from her right liver lobe. Thereafter Amie improved and both Amie and Ryder were discharged home. 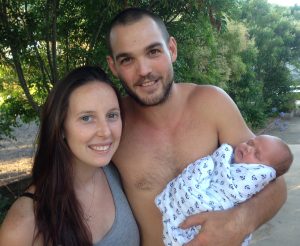 At Amie’s postnatal visit she and Ryder were both in excellent health and all her blood test results were normal.

I am certain Ryder’s poor condition at birth was secondary to there being lack of blood flow getting to the uterus because of Amie’s internal bleeding. I suspect the blood vessel rupture happened at 10am when Amie first had symptoms. Her baby was delivered at 11.20am, viz. one hour 20 minutes after onset of symptoms. In that time Amie was transported to hospital by her father, assessed at the hospital and had her baby delivered by Caesarean section. It was an absolutely fantastic effort by everyone involved and wonderful outcome! With consideration of Ryder’s severe birth asphyxia, if there had been more time, to any significant extent, between rupture of the liver blood vessel and delivery the outcome would likely have been very different. Ryder may not have survived or if he did he would have sustained brain damage from lack of oxygen. Such prompt action by everyone involved (including Amie’s parents) has saved little Ryder.

Amie also came very close to dying. Her abnormal vital signs suggested hypovolaemic shock from internal bleeding. Because of prompt appropriate resuscitation and stopping the internal haemorrhage Amie made a full recovery. Had there not been such prompt and appropriate management the outcome for Amie would likely have been very different.

While there needs further follow-up hopefully Amie’s liver problem is now behind her. She is already talking about pregnancy number two.

Personal information and photos have been provided by Amie. Personal names have been included with permission. Blog has been approved by Amie before posting.