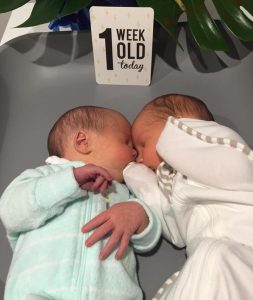 Sam saw me recently for her postnatal visit. She had had an extremely eventful pregnancy with an excellent outcome.

This pregnancy was through successful IVF. She had non-identical twins. She had minor bleeding in the initial weeks which settled.

In the first half of the second trimester, her heart started racing (called paroxysmal supraventricular tachycardia (PSVT)). PSVT is the most common reason for an irregular heartbeat during pregnancy. PSVT is usually transient, usually occurs in brief infrequent episodes, is usually harmless and usually doesn’t require treatment. In Sam’s case, the episodes of heart racing were severe and prolonged and resulted in her attending the local tertiary public hospital A&E department. A cardiologist at the hospital saw her for management. At 21 weeks, she was started on a medication called metoprolol for management of the PSVT.

She needed to attend this hospital’s A&E department multiple times after commencing on metoprolol because her heart kept racing excessively. Her heart rate had episodes when it was over 230 beats per minute (bpm). The normal resting adult heart rate is 60 to 100bpm. Her metoprolol medication dose was gradually increased. The cardiologist also introduced digoxin, potassium, and magnesium.

An ultrasound scan at 28 weeks for twin growth also reported she had a ‘dynamic cervix’. When there was downward pressure on the top of her uterus her closed cervix of 3.4cm length shortened and funnelled opening to 1.4cm. The cervix is usually being 3.5 to 4.0cm long. This suggested ‘cervical incompetence’ developing and that the cervix may open and she would deliver prematurely. I gave her two Celestone Chronodose injections, a steroid we use to help mature a baby’s lungs when preterm delivery is likely. I advised her to stop work and rest. I also commenced her on progesterone pessaries. Progesterone pessaries is a popular management approach to cervical incompetence with evidence that the pessaries can help prevent the cervix giving way.

The ultrasound scan was repeated one week later. This time it reported the cervix length was 2.9cm when closed. There was funnelling with it opening to 1.7cm. The conclusion was: ‘This clearly increases the risk of preterm delivery’.

Because of this risk, I arranged for her to be admitted to the local public tertiary hospital which has a Neonatal Intensive Care Unit. That was in case there would be delivery at 29 weeks pregnant due to cervical incompetence.

She remained an inpatient until 32 weeks pregnant with care provided by the obstetric team and cardiac team. Her cervix remained stable but her PSVT was an ongoing concern.

At 32 weeks pregnant, she was discharged and I continued her care. Her cervix was stable.

At 36 weeks, I delivered her twins by elective Caesarean section. Twin 1 was a little boy who had a birth weight of 3335gms. Twin 2 was a little girl who had a birth weight of 3270gms. Both were born in good condition. Both were admitted briefly to the Special Care Baby Unit. Neither had any problems. After delivery, Sam was switched from sotalol back to metoprolol which is much safer for breastfeeding. She did not have any issues with PSVTs after delivery.

At her 6-week postnatal visit, Sam said she was on metoprolol still and was not having any PSVT episodes. She said a cardiac ablation procedure was being considered by the cardiologist later in the year if her PSVT problem persisted. Cardiac ablation is a procedure that destroys a small area of heart tissue that is causing rapid and irregular heartbeats and usually helps to restore a normal heart rate and rhythm.

Sam did not have PSVT before this pregnancy. The exact reason for PSVT during pregnancy is unclear but has been attributed to haemodynamic, hormonal, and autonomic changes related to pregnancy. Sam’s PSVT in pregnancy was far more severe than usual and posed considerable management challenges. As well there were the challenges of twins, threatened miscarriage, possible cervical incompetence, Caesarean section delivery and history of IVF. With careful team management, all has worked out well for mother and babies.