Was it cervical incompetence? 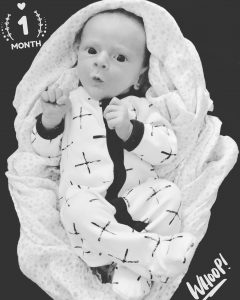 Trish saw me with her husband for the management of her second pregnancy. Sadly, her first pregnancy ended at 20 weeks gestation (pregnancy). She said she had spontaneous rupture of membranes and light contractions before delivering a stillborn little girl. I had not managed that pregnancy. The hospital she attended told her the presentation was consistent with her having ‘cervical incompetence’.

Trish saw me at 8 weeks gestation by her dates. All I could see on ultrasound scanning was a small pregnancy sac in the uterus but no foetal pole. I started biochemical monitoring of her pregnancy with twice-weekly HCG and progesterone measurements. Her HCG results were encouraging and consistent with an ongoing pregnancy. He progesterone levels were concerning and so I commenced progesterone pessaries. A low progesterone level predisposes to miscarriage.

When Trish saw me next time there was a foetal pole of about 7 weeks gestation size with a heart beating at 154 beats per minute. Very exciting! These finding indicated she had not ovulated day 14 of her cycle but later, and so her days could not be used to establish the gestation of pregnancy.

I saw her very frequently during pregnancy because of her obstetric history. Her pregnancy continued uneventfully until 30 weeks and 5 days gestation when she was admitted to hospital with uterine irritability. That was managed by increasing the dose of her anti-contraction medication. The contractions settled, and she was discharged home.

She represented to the Birth Unit at 34 weeks and 1-day gestation with uterine irritability. This time besides increasing the dose of her anti-contraction medication she was given two steroid injections over 24 hours to minimise the risk of the baby having immature lungs if she did deliver prematurely. She was discharged home when the contractions settled.

At 36 weeks and 4 days gestation, she presented to the Birth Unit with increasing uterine contractions, backache and a ‘show’, suggesting a cervical change. I was worried that the suture would tear through the cervix if she did go into labour, and so I removed the suture. I advised Trish if she did have cervical incompetence she could expect to delivery within 48 hours. That did not happen.

Trish was understandably getting increasingly keen to meet her baby. As well it was safer for her to labour and deliver in the daytime. Therefore, labour was induced when she was 39 weeks 1-day gestation. She laboured well, with the total duration being about 4 hours. She had a normal vaginal delivery of a healthy little girl with a birth weight of 3072gms. There was a small perineal tear which I sutured.

Immediately after the placenta delivered her uterus relaxed and she started to bleed heavily. Besides bimanual compression of the uterus, extra medications were promptly given to make the uterus contract. They worked but she a blood loss of about two litres. She was clinically stable. The resulting iron deficiency anaemia was managed with a combination of blood product and an iron infusion.

Trish was discharged home successfully breastfeeding her daughter. She and her husband are so happy.

Cervical incompetence means the cervix is weak and dilates (opens) with the pressure of the increasing size of the pregnant uterus. Consequently, delivery is usually very premature and results in adverse consequence for the baby because of extreme prematurity. When there is cervical incompetence delivery is associated with only minimal uterine activity and its brief duration. This description was consistent with what happened in Trish’s first pregnancy. But that she did not labour after the cervix suture was removed suggests she did not have cervical incompetence. Cervical incompetence would happen each pregnancy. The only other explanation is the cervical suture has caused scar tissue in the cervix and which has given it some strength and resistance to dilatation. Consistent with this is when I examined her before induction of labour her cervix as already almost 3cm dilated, was soft and was starting to efface (shorten in length). As well she had a straightforward and relatively quick labour. She will not automatically need a cervical suture next time there will need to be close monitoring of her cervix.

Postpartum haemorrhage can occur unexpectedly, dramatical and very quickly, as happened here. The amount of blood loss can be life-threatening. There are various possible causes for postpartum haemorrhage. One cause is uterine hypotonicity (uterus had lack of tone or relaxes), which is what happens here. Blood vessels run in the muscle wall of the uterus between the uterine muscle fibres. When the muscle fibres contact after delivery they squash the blood vessels and so there is only minor bleeding after delivery. But it the muscle fibres don’t contract there will be no constriction of these blood vessels and so there will be considerable haemorrhage. While there was very prompt and appropriate management there was significant blood loss.