Does taking a Pap smear in pregnancy increase the risk of miscarriage? 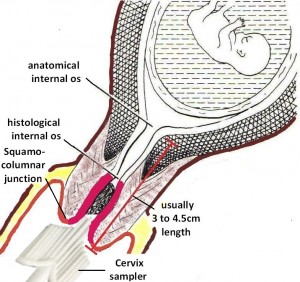 Sometimes when I see a patient for the first antenatal visit she is overdue due for her Pap smear.

She comments her general practitioner doctor was not prepared to take a smear as she is pregnant and was worried taking the smear may cause a miscarriage.

A Pap smear is taken from the uterine cervix where the type of cervix skin cell changes from one called ‘squamous’ to one called ‘columnar’. This part of the cervix is called the squamo-columnar junction of the cervix and also called the ‘transformation zone’ of the cervix. It is this area of the cervix that abnormal changes can occur that can develop into the commonest cervical cancer (squamous cell carcinoma). There needs to be both squamous cells and columnar cells in a smear specimen for it to be classified as ‘satisfactory’ quality.

In the diagram adjacent the transformation zone is shown. The columnar skin is coloured red.

In pregnancy the squamo-columnar junction often is more on the outside part of the cervix (called ‘ectocervix’). That means there are more columnar cells also on the outside part of the cervix. In contrast to squamous cells, columnar cells are more friable and bleed more easily when scraped. As well the cervix is more vascular in pregnancy and this increases the likelihood of it bleeding with superficial trauma.

It is because of these changes, and the greater tendency for the cervix to bleed when taking a smear that it is more difficult in pregnancy to get a good quality smear, without too much blood on the slide. If there is too much blood on the Pap smear slide the smear will not be of satisfactory quality for checking for abnormal cells.

A ‘cervix sampler’ is usually used to take smear. It scrapes the ectocervix except for its central three brushes which go into the cervix canal to a maximum depth of 0.7cm. The cervix sampler at the entrance of the cervical canal is shown in the diagram. The cervical canal typically is 3 – 4.5 cm long. So there is a considerable distance between where the smear is taken and where the baby is in the uterine cavity. This is shown in the diagram. Hence there is no risk scraping cells from the transformation zone will cause miscarriage.

I have had quite a number of women from whom I have taken a smear at the first antenatal visit which has had an abnormal result. If there are significant abnormal changes then colposcopy and colposcopically directed cervical biopsy is indicated. Taking the biopsies will result in cervical bleeding, but again this is not associated with miscarriage

As long as the abnormal cervical changes are less than cancer then there is no cervical treatment while pregnant, even if there are severe precancerous changes. Rather the cervix is reassessed postnatally. Then the cervix can be treated as necessary.

I will only take a Pap smear if indicated and agreed by the patient and if the patient in the first trimester of pregnancy. Otherwise I will leave it until her 6 week postnatal visit